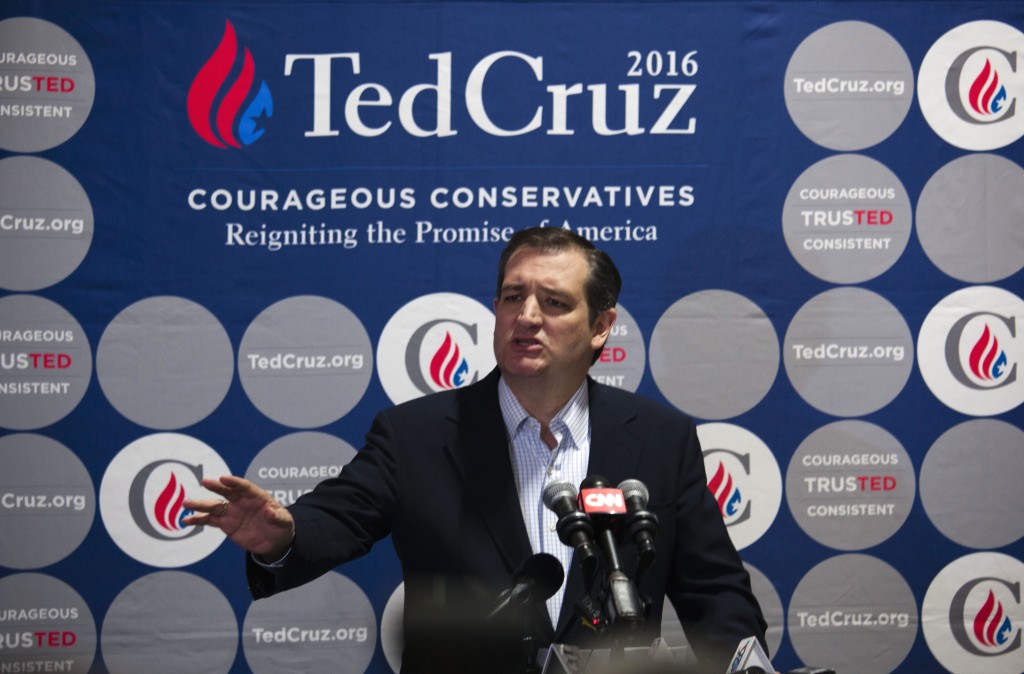 The increasingly personal battle between Ted Cruz and Donald Trump has escalated on Good Friday when The National Enquirer published a story alleging that the Texas Senator had extramarital affairs with five women.

“Let me be clear, this National Enquirer story is garbage,” Cruz said Friday during a press conference in Wisconsin. “It is complete and utter lies. It is a tabloid smear, and it is a smear from Donald Trump and his henchmen.”

Saying, “the truth does not matter,” to Mr. Trump, Cruz told reporters the article is sleaze and hopes voters are fed up with this lie. “[Trump] will lie and go to sleaze,” Cruz said. “Well, that sleaze has no place in politics, and I hope the American people are fed up with it.”

“The question the people of America are asking, is how low will Donald go, is there any limit he will not go,” Cruz said. “I believe his conduct in this campaign is convincing millions of Americans that this man will be an embarrassment as president who will sleaze and slime and attacks the family member of other candidates.” 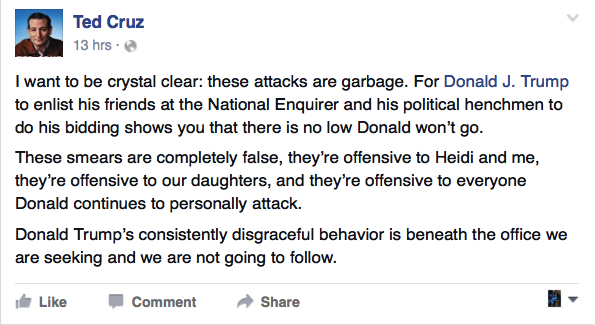 Trump, in a statement released shortly after Cruz released his statement on Facebook denied any involvement of the tabloid allegations article.

“I have no idea whether or not the cover story about Ted Cruz in this week’s issue of the National Enquirer is true or not, but I had absolutely nothing to do with it, didn’t not know about it, and have not as of yet read it,” Trump wrote. 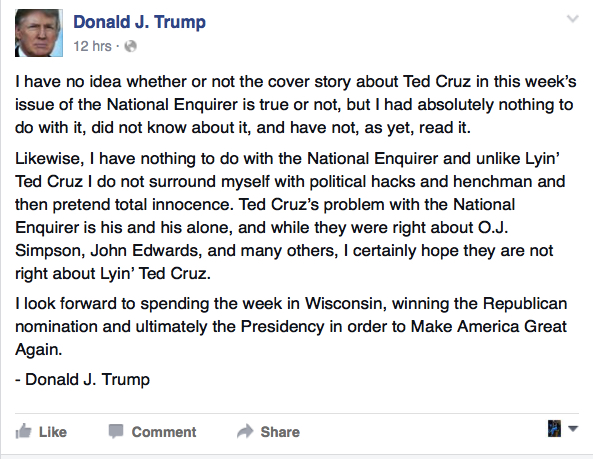 Cruz alleged that a former Trump top political adviser, Roger Stone, pushed the allegations in the National Enquirer story. In the story, Stone said the rumors of the affairs have been “swirling around Cruz for some time” and he heard about it from credible reporters.

“Mr. Stone is a man who has 50 years of dirty tricks behind him” noting Stone is quoted on the record in the National Enquirer article. “What is striking is Donald’s henchman Roger Stone had for months been foreshadowing that this attack was coming. It’s not surprising that Donald Trump’s tweet occurs the day before the attack comes out.”

The Texas senator added that Trump’s friendship with the CEO of the National Enquirer’s parent company American Media Inc., David Pecker, made the allegation possible to print and was not surprised. The National Enquirer endorsed Trump earlier this month, Cruz highlighted Friday, noting the headlines “Trump Must Be President” to point out the fact how Trump is behind the allegations the tabloid published.

A spokesperson from American Media released a statement that to point out that no one can influence the tabloid magazine in its reporting other than the reporter and the editors. “We stand by the integrity of our coverage and remain committed to our aggressive reporting on such an important topic.”

“Donald Trump’s consistently disgraceful behavior is beneath the office we are seeking and we are not going to follow,” Cruz said. “Donald Trump is terrified to engage in a debate and right now is hiding in Trump Towers doing no political events, sending tweets late at night.”

The weeklong exchange of nasty words between the top two GOP contenders began when an Anti-Trump Super PAC, Make America Awesome, ran an attack ad during the Utah Caucus that featured an old, provocative model shot of Trump’s wife Melania that said meet “your next first lady.” Trump, anger at the ad, blamed Cruz’s campaign for being behind the ad and went on to twitter to threaten Cruz.

Lyin’ Ted Cruz just used a picture of Melania from a G.Q. shoot in his ad. Be careful, Lyin’ Ted, or I will spill the beans on your wife!

Cruz responded to the tweet from Trump stating the attack ad didn’t come from him personally, adding, “If you try to attack Heidi, you’re more of a coward than I though. #classless.”

Pic of your wife not from us. Donald, if you try to attack Heidi, you’re more of a coward than I thought. #classless https://t.co/0QpKSnjgnE

The following day, Trump would retweet a side-by-side image of Cruz’s wife and his wife with a caption that said, “No need to spill the beans, the images are worth a thousand words.”

Cruz was livid and told Trump to “leave Heidi the hell alone.”

Donald, real men don’t attack women. Your wife is lovely, and Heidi is the love of my life. https://t.co/pprXhIMzUT

During a stump with her husband in Wisconsin, Heidi Cruz said she isn’t worried about the tweeted taunts from Trump. “You know, as I said, you probably know by now that most of the things that Donald Trump says have no basis in reality,” Heidi told reporters. “So we are not worried in the least, we are focused on our campaign, and we are going to continue to do that.”

After the press conference, Trump retweeted a tweet that said Cruz has a mental health problem.

Asked if he would still support Trump if he would become the Republican nominee despise his rival escalating personal attacks that has occurred, Cruz didn’t respond with a straightforward answer.

“I don’t make a habit out of supporting people who attack my wife and attack my family,” Cruz said.

Daniel Greenfield: Islamic Terrorism Is Over If You Want It