Donald Trump has described Brussels as a “hellhole,” adding that it was a beautiful city once. If so, it must have been before I lived and worked there, before the Maastricht Treaty. I worked in the very center of EU. I lived on Archimedes Street, nearby the Royal Arms Museum, and I often used the Schuman Metro station to go downtown.

Brussels has always been a City Divided – by income, race, national origin, even by weather… For all the Babel of languages there, with everyone speaking English, German, French and Flemish (even at home), no-one really feels a secure “national identity.” This is clearly apparent the moment you speak with people. They will tell you “my mother is French, my father Flemish, my brother lives and works in Germany, we watch the BBC…” What language do you speak at home? “I speak French with my mom, Flemish with my dad…” Assimilation? Think again! The lack of identity, strong patriotism, national feeling, love for the country… show in the demure expression. If I did not know any better, I would say it is the diet of worms made them so – big, small, tiny frozen and fresh worms – supermarket shelves are lined with them!

Brussels is a gloomy city with very little sunshine, where days are short, skies cloudy and mood generally somber. When I first arrived in Brussels, I was stunned by the strange “architecture” which mixed medieval houses and modern glass-and-steel buildings virtually indiscriminately. Apparently, until the EU became headquartered here, there were no “cultural heritage” protection laws so people were free to pull down old buildings and construct new ones as they thought fit. The result is a strange mixture of old-and-new: you can still see a modern office block lined by medieval gothic-style decrepit houses.

Local people are averse to the EU, which they see as an imposition on their economy and lifestyle. I worked for the EU and was paid three times the average Belgian salary – and that was only my starting salary.  In the gym, I spoke to the “locals” who frowned the moment they saw me: they could tell instantly I was not “one of them” and in that area, everyone who was not one of them belonged to the hated and despised EU, sponging on their taxes and economy.

Nonetheless, I did make a few friends and acquired better insight. I was warned not to go out after 5-6pm (i.e. “after dark”) alone – anywhere– for Brussels is a city of narrow streets, sharp corners and dangerous shadows, where drugs and prostitution are rampant. However, above all, the EU quarter where I lived, around Schumann and Maelbeek was swarming with strange, lanky, gypsy-looking “types” whose eyes were beady, piercing, merciless. This was twenty years ago. Oh, how blissfully little did I know then about terrorism… 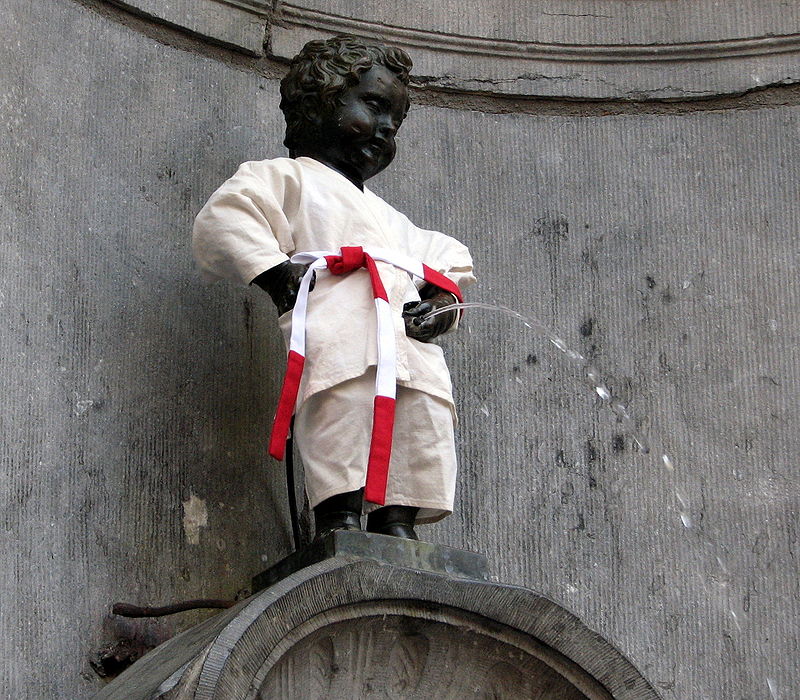 Brussels has its charms: once a year, in August, they carpet the Grand Old Place (Central Square downtown) with over a million flowers. It is some sort of a show-off competition among the local flower schools and sellers; then there is Belgian chocolate, probably the best in the world; another “attraction” is an awfully cute Mini-Europe: a Gulliver-land model city of European states where you can stroll between the Big Ben and Eiffel Tower, watch P&O ferries – all four to fourteen feet tall and long. The most famous of all these “charms” is probably the four feet tall statue of the “Pissing Boy” which dates back to the 17thcentury and celebrates a little boy who quenched the fire which had threatened to destroy the city in the 12thcentury. It is a cute legend. They dress the boy in different costumes and all Belgian people are mighty proud of him. So, after a long search, dedicated afternoon, I finally found the prophesied “Mannequin Pis” – and what a disappointment that was! Granted, the Danes have their “Little Mermaid,” the English their “Peter Pan,” and we – ? Well, we have the Statue of Liberty.

I call Brussels a “City Divided” because there is no unity. Everyone is a stranger there and for all the effort to unify and assimilate, the multiplicity of languages and cultures has made it into a shabby, unremarkable blob where people go on business when they must, and get out as soon as they find out what it is all about. In all respects, Brussels is the very opposite of New York and Belgium the antithesis of America.