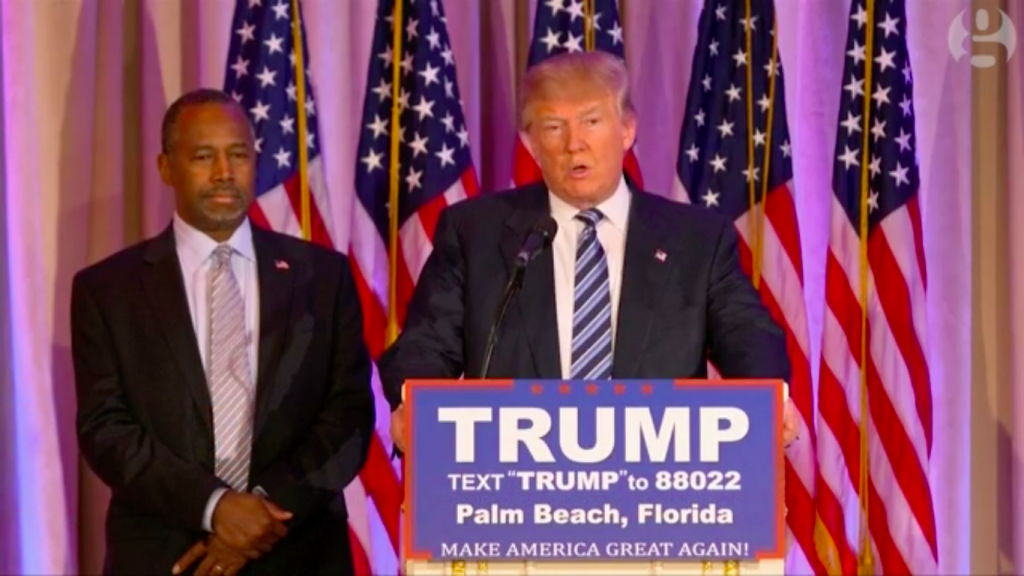 Former GOP hopeful Ben Carson threw his support behind front-runner Donald Trump, saying both men have “buried the hatchet” and have come together to unite the party.

“Some people say why would you get behind a man like Donald Trump,” Carson told reporters gathered in an early morning press conference in Trump’s Mar-go-lago resorts in Palm Beach, Florida. “I’ll tell you why, I have come to known Donald Trump over the last few years. He is actually a very intelligent man that really cares deeply about America.”

“There are two different Donald Trump,” Carson added. “There is one you see on the stage and there is one who is very cerebral, sits there and considers things very carefully. You can have a very good conversation with him and that is the Donald Trump you are going to start seeing more and more of right now.”

The second former GOP candidate to endorse Trump, the news of the endorsement was confirmed by the front-runner the night before during the GOP debate. The pair appeared together at a news conference to formally confirm the endorsement where Carson announced his reason for backing Trump had to do with concerns over the “Never Trump” movement.

“What I have been seeing recently is political operatives and parties once again trying to assert themselves and trying to thwart the will of the people,” Carson stated. “I find that to be an extraordinary dangerous place to be right now. I want the voice of the people to be heard.”

Carson echoed Trump plea of unity within the Republican Party. “A house divided against itself cannot stand,” Carson said. “I want the will of the people to be heard and I want the political process to play out as it should play out.”

Introducing Carson as a “special, special person,” Trump acknowledged the tense exchanges he had between Carson previously during the election cycle last year. Trump explained his reasoning for attacking his former rival was in part of Carson’s poll numbers going up that led to him becoming a front-runner for a short period of time.

Carson added he wasn’t personally offended by Trump tone against him. “We move on because it’s not about me, it’s not about Mr. Trump,” Carson said. “It’s about America. We buried the hatchet.”

When asked by reporters as to why he didn’t endorse Cruz, Carson stated that Trump is willing to do what needs to be done to break the stranglehold of the lobbyist and the special interest. Pressed on about Cruz, Carson was asked if he has any hard feelings towards Cruz over the situation that occurred in Iowa. “I have completely forgiven him,” Carson replied. “That is a duty one has as a christian.”

In regards to the role Carson would be involved in Trump’s campaign, Trump said he and Carson had a good discussion on education this week.

“I was most impressed with his views on education,” Trump said. “We spoke for over an hour on education and he has such a great handle on it. I’m going to have Ben very involved with education, something that’s an expertise on his.”

Many people fight for change in DC. @realDonaldTrump is a leader with an outsider’s perspective & the vision, guts & energy to get it done.

I Agree and Stand With "Conservative Republican" Caitlyn Jenner