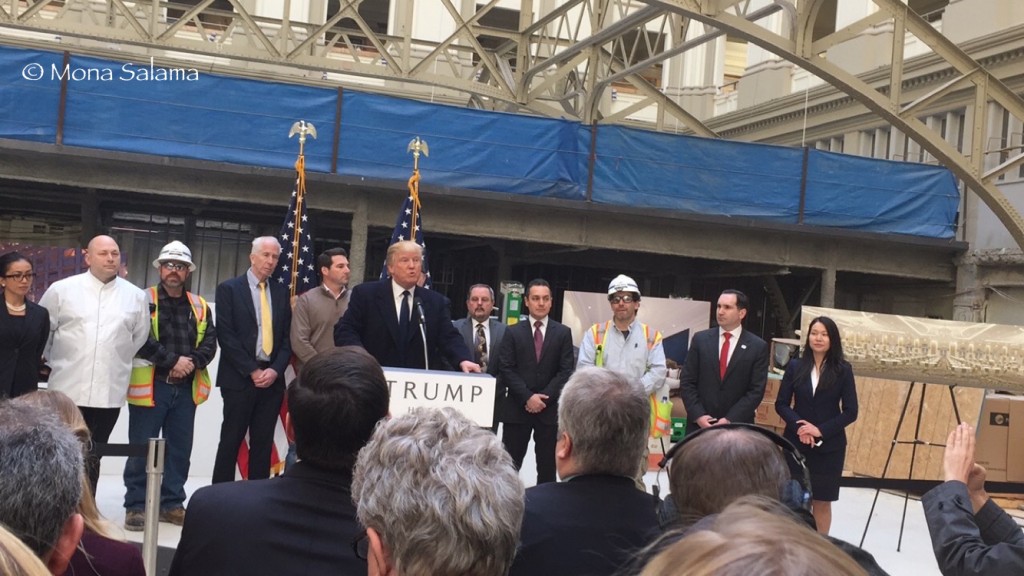 Before giving his speech to a leading pro-Israel lobbying organization known as AIPAC, front-runner Donald Trump gave a news conference and tour to the national media in Pennsylvania Avenue, where his soon to open new luxury hotel is located.

Just blocks away from the White House, Trump declared one way or another he is coming to the nation’s capital, boasting his newly business deal that is scheduled to open ahead of schedule and under the budget in September.

After describing his new hotel, Trump took questions from reporters. When asked about a brokered convention, where leading anti-Trump Republicans are attempting to coalesce around a third-party candidate to prevent him from the nomination for presidency, Trump stated they “better be careful” when it comes to a third-party. “Democrats are going to win almost certainly,” Trump said, warning that if Republicans backs a third-party candidate, it would hand the elections to the Democrats. “You can’t be spiteful because you would destroy the country.”

Before his press conference, Trump met with various Congressmen and lobbyists at the Jones Day law firm, some who support his candidacy along with a handful of those who are against him. Without mentioning names or details of the meeting to reporters, Trump claimed those who are opposed to him publicly are privately talking to him. “They can play games and they can play cute, I can only take them at face value,” Trump said. “You have a lot of people out there that you think are against me, but they are just politicians and they want to make a deal.”

When asked by One America News political correspondent Neil McCabe about whether Speaker Ryan should chair a brokered convention, Trump stated the House Speaker said he plans to remain neutral during the nominating procedures. However, new reports are now casting doubts on whether Ryan can remain neutral based on the Speaker working behind the scenes to block Trump from becoming the nominee along with public statements he has made criticizing the front runner.

However, Trump suggested the shortage of the 1,237 delegate count needed will be good enough for him to still get the nomination based on him narrowing down “massive field of 17 candidates” that is now down to three. “If I am short by 30 or 50, it would be a little bit unfair to allow an open convention,” Trump said. “From what I am seeing, we won’t have to fight at a convention.”

On the Supreme Court nomination, Trump said he plans to release a list of ten potential conservative justice sometime next week, saying the list composed is what he plans to use to appoint the next justice if he become president. Trump declared that he will not “appoint a liberal judge,” and the list is being made in consultation from former Senator Jim DeMint who now heads the Heritage Foundation. 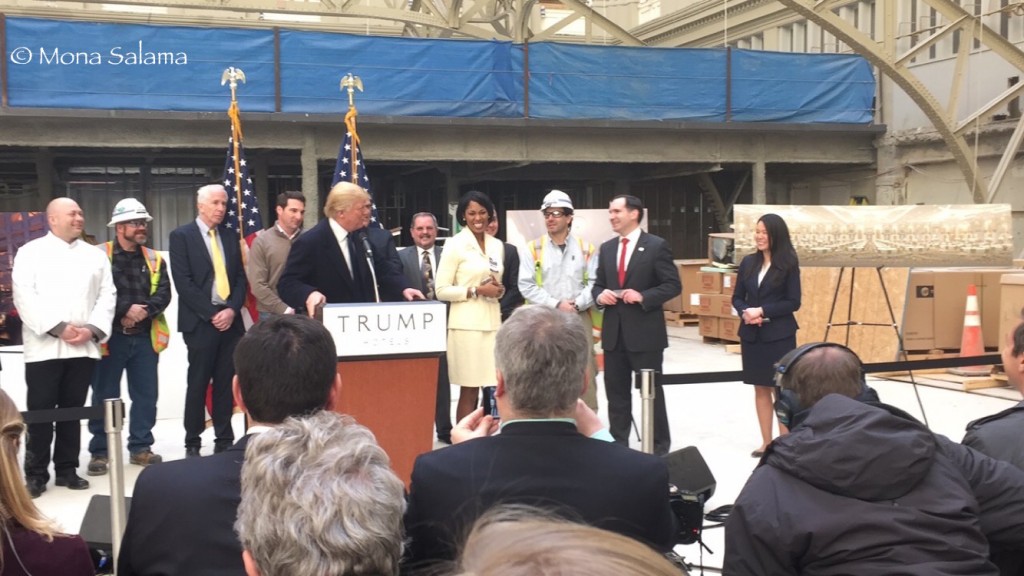 Half way through the conference, Trump picked Alicia Watkins, a former Air Force staff sergeant and 9/11 survivor. Watkins attended the press only credentialed conference would ask Trump how he would plan to incorporate employment opportunity programs for veterans for his hotel. “We are doing some of that, what are you looking for, what kind of position,” Trump asked Watkins before inviting her up to the podium to conduct a job interview. “Do you mind if I do a job interview right now?”

Describing herself during the job interview, Trump was pleased with her response and was directed to a person standing behind him to work out an employment deal. “If we can make a good deal on the salary, [Watkins] is going to probably have this job,” Trump said, adding he had a “gut instinct” about her on his reason for doing on-the-spot job interview.

After the presser, Watkins told reporters when asked how did she get a press credential that she is blogger who is working on an article about veterans and jobs. She also stated that the front-runner now has won her support and her vote in the upcoming Maryland election next month.

Concluding the half-hour press conference, Trump lead a swarm of close to 200 reporters around the under-construction site of the Old Post Office Pavilion. “Let’s take a tour, nobody asked about the hotel,” Trump said, as reporters chased the front-runner as he walking through the hotel, pointed out future decor while taking a few random questions.

“That’s a brand new floor,” Trump said. “In about a week, it is going to get covered with marble, beautiful marble from different parts of the world.”

Let History Be the Judge