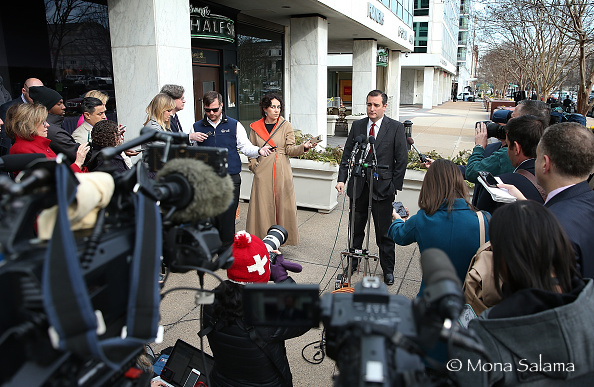 In light of the attacks in Brussels that has killed so far 34 people and over a hundred wounded, Texas Senator Ted Cruz held a press conference early Wednesday morning in Washington, D.C. regarding the latest attacks while slamming President Obama for being away in Cuba.

“In the wake of Brussels, we don’t need another lecture from President Obama on Islamophobia,” Cruz said at a last minute press conference outside Capitol Hill. “We need a Commander-in-Chief who does everything necessary to defeat the enemy.”

The Texas senator bashed the President for being in Cuba instead of being on his way to either Brussels or back home in the states.

On Monday, Donald Trump called for a reduction U.S. role during a Washington Post editorial board interview, expressing concerns how the cost of involvement is helping other countries besides the United States. “I think the concept of NATO is good, but I do think the United States has to have some help,” Trump told The Washington Post. “We are not helped, we pay billions – hundreds of billions of dollars to supporting other countries that are in theory wealthier than we are.

Trump added, “NATO is costing us a fortune and, yes, we’re protecting Europe, but we’re spending a lot of money.”

Regarding Trump’s comments, Cruz said, “It is striking that the day after Donald Trump called for America weakening NATO, we see Brussels, where NATO is headquartered the subject of an Islamic terrorist attack.”  He added, “Trump is wrong that America should retreat from Europe and from NATO and hand Putin a major victory and while he is at it, hand ISIS a major victory.”

Calling the attacks a “war with radical Islamic terrorism,” Cruz repeated his calls to revisit our immigration policy to prevent Islamic terrorists from coming into this country. “We need to immediately halt the President’s ill-advised plan to bring in tens of thousands of Syrian Muslim refugees,” Cruz said. “Our vetting programs are woefully insufficient. This administration has no means of preventing those refugees from being ISIS terrorists.”

“It is time for us to implement serious vetting and we should not be allowing anyone to come to this country that we cannot vet to make sure that they are not radical Islamic terrorists.”

Terror Attack in Brussels: Due to Political Correctness & Lack of Leadership?

AlfonZo Rachel: Why Zo Isn't Interested in Promoting a Candidate