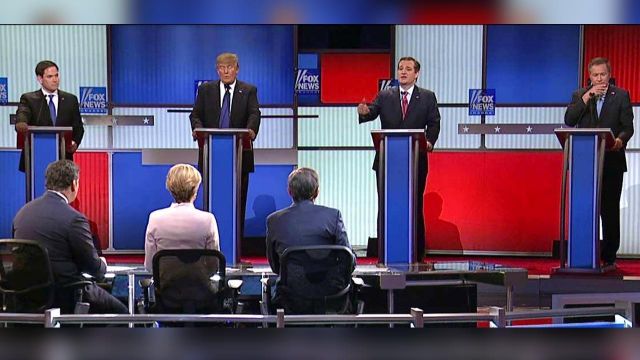 Detroit, MI —The 11th GOP debate, hosted by FOX News opened up with the GOP front-runner Donald Trump defending his manhood to the American voters.

Before Super Tuesday, Marco Rubio focused his time attacking Trump where at one point it became a low blow. “Have you seen his hands?” Rubio said last week in Virginia. “You know what they say about men with small hands? You can’t trust them.”

During the debate held in Downtown Detroit at the historic FOX Theater, moderator Bret Baier asked Rubio why has he mocked Trump on his tan, his spelling and the vulgar comment Rubio said in Virginia. “This campaign for the last year, Donald Trump has basically mocked everybody with personal attacks,” Rubio answered. “So if there is anyone who has ever deserved to be attacked that way, it has been Donald Trump, for the way he has treated people in the campaign.”

Trump responded to Rubio answer, a response that will now dominate the headlines for months to come.

“And he referred to my hands, if they are small something else must be small,” Trump said. “I guarantee you there’s no problem.”

Throughout the whole night, Trump faced continuous attacks by his Republican rivals, but he pushed back with counterattacks that consist of humor and insults. Both Rubio and Ted Cruz are fighting to prevent Trump from winning the nomination, as they see the only non-politician candidate left running away with it with nothing working to stop him. Using his past business failures, his campaign donations to democrats and his past flip-flopping remarks, both Senators focused their remarks to make the case to snap voters out of Trump’s spell. In the center of the stage was Trump, who remained confident after dominating seven victories just two days ago, but still was on the defensive throughout the two-hour event.

“Two-thirds of the people who cast a vote in a Republican primary or caucus have voted against you,” Rubio said in response to electorate voting for Trump based on his populist message. “They don’t want you to be our nominee. We are not going to turn over the conservative movement, or the party of Lincoln or Reagan, for example, to someone whose positions are not conservative…defending Planned Parenthood…and no ideas on foreign policy who thinks the nuclear triad is a rock band from the 1980s.”

“CNN just came out with a poll two days, a national poll where he is at 15, pointing to Cruz, he is at 14 while pointing to Rubio, and I’m at 49,” Trump quipped.

Cruz seized the moment to add on the feud on electability by pointing out that he doesn’t think the American people are not interested in slogan while declaring that the race should be focused on “the people at home who are struggling” through for the past seven years under President Obama.

“The people of America are interested in solutions, not slogans. It is easy to say make things great and you can even print it and put it on a baseball cap,” Cruz said, combining his attacks with his solutions he believes that would help to overcome the struggles. “And that is why our campaign is the only campaign that over and over has beaten Donald Trump to date, to go forward and beat Donald Trump in this election.”

Cruz went on to bash Trump’s deep ties with the Democratic Party, in particular to Hillary Clinton, whom he donated money to her presidential campaign against Obama in 2008. “For 40 years, Donald has been part of the corruption in Washington that you are angry about,” Cruz pointed out. “And you are not going to stop the corruption in Washington by supporting someone who has supported liberal Democrats for four decades.”

Prior to Super Tuesday, Rubio escalated his attacks against the front-runner, calling him a “con-artist,” based on his business experience. When asked to explain why he calls Trump a “con-artist,” Rubio went into details of his business with an inheritance, losing more money than made and making clothing in Mexico and China instead of the United States. Trump shot back with his own attacks, “This little guy has lied so much about my record.” Rubio interjected, accusing Trump for not being able to debate on substance.

“You see what happens again when you challenge him to a policy issue?” Rubio said. “The first thing he does is launch an attack on some little guy thing.”

On the recent report from Buzzfeed in regards to Trump being soft on immigration based on his off the record interview with the New York Times editorial board, both Rubio and Cruz called for the releases of the tapes to see if Trump has been lying to the American people.

Trump didn’t deny that he might take a softer stance on deporting illegals. “Sometimes you ask for more than you want and you negotiate down to the point,” Trump said. “I may have discussed something like that with the New York Times, but I would never release off-the-record conversations. I don’t think it’s fair to do that to anybody.”

“Donald, you could resolve this issue very quickly by simply releasing the tapes,” Cruz said. “Because, listen, maybe it’s right that you didn’t tell them you are misleading the American people, the tapes will prove you are innocent.”

“On the issue of the off-the-record, that’s not up to the New York Times. That’s up to you Donald,” Rubio said. “If tonight you tell the New York Times to release the audio, they will do it, and we can exactly see what your true views are on immigration.”

The most heated exchange between Rubio and Trump involved “Trump University,” a subject the Florida Senator has used as his argument to prove his case against the front-runner. Recalling how he recently spoke to one of the victims, Rubio described to the crowd how Trump defrauded students and is now facing civil litigation.

“I spoke to one of the victims yesterday,” Rubio proclaimed. “He told me exactly what happened where they signed up for a course because they believed Trump was this fantastic businessman and Donald was going to teach them the tricks of the trade.”

Rubio added, “They were asking for additional money if they really wanted the real secrets of success and you know what they got in these courses? Stuff you can pull off a Zillow.”

Trump was put in the spotlight in regards to his flip-flopping stances on the Iraq war and accepting Syrian refugees. “I was always against going into Iraq,” Trump said, defending his position. “There was some cases where I sort of in one interview with Howard Stern, I said very meekly, long before we went in, well maybe I don’t know.”

On the Syrian refugees, Trump explained how the number of migrants coming in played into the factor of him changing his mind. “It was very early on when the migration just started and I heard that the number was very small,” Trump explained. “By the second day, I heard the number was going by the thousands and thousands of people… I changed my tune.” Trump went on to explain how his change of tune is due to his flexibility. “I have a very strong core,” Trump said. “I have never seen a successful person who didn’t have a certain degree of flexibility. You have to have a certain degree of flexibility.”

Rubio jumped in to show off his zinger against Trump and Cruz after both were tangled in a heated exchange. Cruz repeatedly asked Trump to “breathe, breathe, breathe,” when he was attempting to interrupt the Senator. “When they are done with the yoga, can I answer the question?” Rubio said.

“You cannot,” Cruz responded to Rubio demand. I really hope that we don’t see yoga on this stage.”

Rubio responded back with a joke about Trump, “Well he is very flexible, so you never know.”

Ohio Governor John Kasich stood away from joining his fellow rivals with the infighting against Trump. With the election race dominated by the attacks to each other, Kasich has took a different route, remaining positive and refusing to attack Trump or any of his rivals. Attempting to see if he would take the bait, Kasich was given the chance to make a clear dig at the front-runner. In December, Kasich campaign ran a video in regards to Russian President Vladimir Putin saying nice things about Trump and was asked if he believes this. Kasich didn’t take the bait, stating he was not “biting” before changing the subject to describe what is going on around the world.

Going back to August, the first ever debate hosted by FOX News began with moderator Bret Baier, asking at that time the ten top candidates on the stage, “will you pledge your support to the eventual nominee?” Fast forward now to so far the last FOX News debate, the 11th debated ended with the same question.

After all the fighting, bettering and insults, all three of Trump’s rivals have pledged to support him if he does become the Republican nominee. As for Trump, he also said he would back whomever the party picks as the nominee, even if he doesn’t get the nomination.

(Parody) Obama Touts Gitmo Recidivism Numbers: “We’ve Educated the Jihad Out of Them.”

Cruz at CPAC Rips on Trump and Rejects Brokered Convention