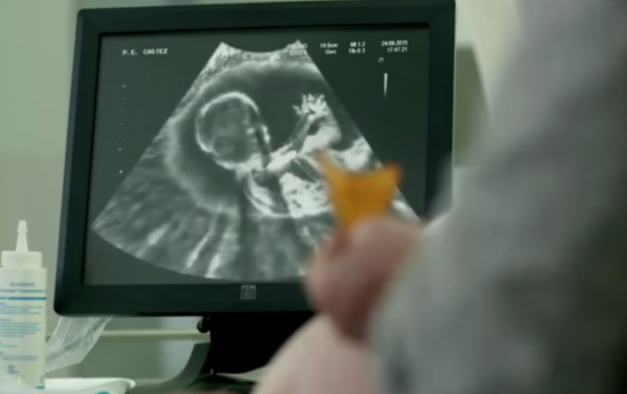 As most of the world knows by now, the pro-abortion group NARAL has gone ballistic over the Doritos Super Bowl ad for daring to “humanize” a fetus. As it turns out, NARAL has every reason to be terrified:   One of their two founders, Dr. Bernard Nathanson, converted to pro-life after seeing a fetus humanized in an ultrasound.

Another major player in the pro-choice movement, former Planned Parenthood clinic director Abby Johnson, left their side after participating in an ultrasound-guided abortion and recognizing the humanity of the baby being aborted. She quickly became one of the most powerful voices in the pro-life movement.

When people see via ultrasound that what is in the womb is, indeed, a human being, the pro-choice arguments lose a lot of their punch. It becomes much more clear that, if it is a human, then killing it is wrong. This “humanization” thing has cost NARAL and Planned Parenthood some of their most ardent supporters.

The abortion industry has long relied on semantics, smokescreens, and lies in order to justify their existence. Women are told that they are aborting a “pregnancy” or a “fetus,” which is just blobs of cells or bits of tissue. They are not told that they are, in fact, carrying a real baby, with a heartbeat, capable of communication, intention, memory, and feeling pain and terror.

All of the arguments for abortion are shattered when the humanity of the fetus is acknowledged.

That was the experience of Dr. Bernard Nathanson. He and Betty Friedan founded the organization now known as NARAL Pro-Choice America in 1969. Their organization fought for the legalization of abortion, eventually succeeding with Roe v Wade in 1973. Nathanson was responsible for more than 75,000 abortions, including many in the abortion clinic that he ran and the abortion of his own child by his own hands.

He performed most of those abortions without the use of ultrasound, which just began coming into use in the late 1970s. His career as an abortion doctor ended promptly in 1979 after he participated in an ultrasound-guided abortion. He saw the baby fighting for his life, and had a dramatic change of heart after seeing the humanity of the baby he was aborting.

By 1985, he produced and narrated a powerful film called “The Silent Scream,” in which an ultrasound shows a baby struggling and fighting against the abortion instruments, as it is killed. The film (link here) became a powerful tool for the pro-life movement.

President Reagan inspired him to make the film, reported the LA Times, when Nathanson heard the President address the National Association of Religious Broadcasters. Reagan stated that a baby feels “long and agonizing pain” during an abortion. That statement earned the President immediate criticism from the left, but Nathanson supported him. He decided that the best way to resolve the issue was to film an abortion happening on ultrasound; thus the film, “The Silent Scream,” came into being.

Not only did seeing the humanity of the baby in the womb via ultrasound dramatically change Dr. Nathanson’s perspective in 1979, the filmed ultrasound in 1985 which clearly showed the agony of an aborted baby changed the minds of countless people, as he and the National Right to Life took the film all across the nation.

Thirty years later, in September of 2009, it was again the sight of the humanization of a baby in the womb seen on ultrasound that changed the heart of a Planned Parenthood’s darling. On that day, PP clinic director Abby Johnson was asked to hold the ultrasound probe for a visiting abortion doctor as he performed an abortion. After working with PP for 8 years, what Abby saw during that ultrasound changed her forever.

She describes the horror that she saw in the suction abortion of the 13-week baby. Hear her story here.

The humanization of a human baby is quite powerful, exposing the lies that NARAL and Planned Parenthood have sold to people for decades. No wonder the Doritos ad terrifies them. It exposes the truth that abortion does, in fact, kill a human being – a truth that the abortion organizations have tried to hide from the public for years.