He wants to ban Muslims from entering the United States. He supports 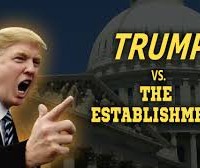 rounding up and deporting illegal immigrants, and making Mexico pay to build a wall along the southern border. He has made unflattering remarks to and about women. Basically, he’s about as politically incorrect as you can get – in fact, he has specifically stated that neither he nor the country has time for political correctness. Countless now are the instances he has said something that analysts swore was it, his own death knell, the end of his campaign. By any traditional political metric, he should be politically dead and buried a dozen times in a deep political bloodbath by now, relegated at best to the fringe of primary contenders, battling perhaps to “send a message” but knowing full well he has virtually no chance of actually winning anything.

So why is Donald Trump the King of the Republican primary race?

To put it simply: Because conservatives in this country are fed up. They’re fed up with politics as usual, fed up with holding their nose and voting for the lesser evil, and most of all, they’re fed up with the Republican establishment. They’re tired of watching a party once led by Ronald Reagan run candidates who are barely short of Democrats, carrying the implicit assumption that leadership “knows” conservatives will blindly follow them around like sad puppies because there’s nowhere else to go. They’ve had enough, and they aren’t going to take it anymore.

Donald Trump represents everything the marginalized conservative camp has been waiting for. He is diamond-strong on national security, he’s an experienced, successful businessman who understands how capitalism works and how he can use it to revitalize the economy, and perhaps most importantly, he is by no stretch of the imagination afraid to tell it like it is. After being forced for years to ingest the likes of John McCain and Mitt Romney, who grudgingly paid them reluctant lip service when they weren’t flagrantly embracing liberal policies, conservatives finally have a candidate who genuinely believes in the same principles they do; or at least, he certainly seems to, because he isn’t playing the game of politics. He’s not being gentle and diplomatic – about anything. He says what he likes, completely heedless of the fact that much of it should be killing him. Yet his popularity grows, not suffers, with each outrageous, unconscionable, and refreshingly conservative word that comes out of his mouth.

And it hasn’t gone unnoticed. The Republican establishment is terrified of Trump. Whatever their tortured reasons, they have been slowly but surely moving the party to the left for several election cycles. They no longer believe in a secure border, they routinely betray the principles of limited government, and they’ve lost faith in the power of free enterprise. Now comes Trump, who strongly supports all of those things, and has amassed enough popularity not only to catch leadership’s attention, but potentially to steal the nomination as they are forced to sit powerlessly by and watch. This is what comes of having taken their base for granted for so long. The Republicans’ chickens are coming home to roost, and they’re led by a straight-talking Manhattan business mogul.

It’s too early to tell who will win the Republican presidential nomination, but Trump is certainly ticking all the right boxes. He lost in Iowa, whose caucuses have an historically abysmal record of predicting the eventual GOP winner, he prevailed in New Hampshire, and now South Carolina the first primary state and a much more important prognosticator of where the nod will go. Donald Trump may very well deliver payback to the Republican party for assuming they were entitled to millions of conservative votes no matter what, but even if he doesn’t win the nomination, he will give them the scare of a lifetime.

#MonaLog: Nevada Caucus Edition and Beyond

The People's Initiative To Limit Taxation - Without Justice Antonin Scalia