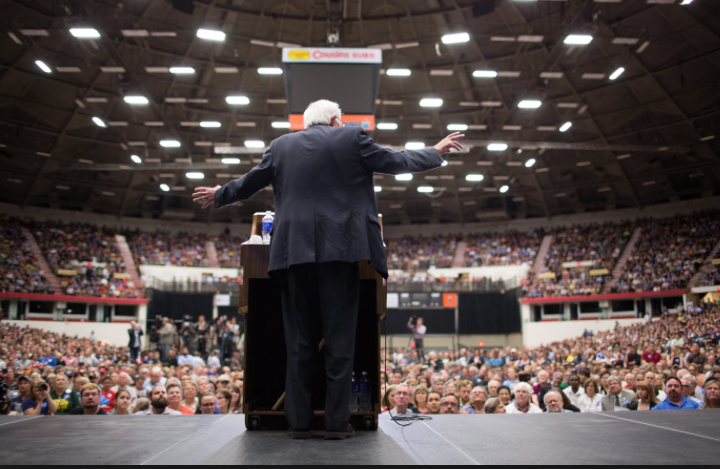 74-year old Senator Bernie Sanders (I-VT) is proclaiming his Democrat candidacy is a revolution, stating that his anti-establishment campaign is about philosophy. His enthusiastic supporters include the primarily disillusioned millennia wedded to his political philosophy of “free stuff” as a “right” and the far-left committed socialists who dismiss the nation’s nineteen-trillion dollar debt and the roughly 94 million people who have dropped out of the labor force because they could not find work.

Both political parties are experiencing an insurgency. What differs in the two parties are the perceived causes of the national decline and it’s affect on its citizens. The Socialist Left is convinced wealth redistribution is the solution. Sanders has made it the centerpiece of his campaign. The Right is rallying for a return to Constitutional governance and rule of law to re-establish liberty and equal treatment under the law; the return of free (and fair) market principles to rebuild our economy and the reclaiming of our national sovereignty by protecting our borders and stopping illegal immigration.

I contend that Sanders’ candidacy is not a political revolution but an evolution of the socialism-Marxist philosophy initiated in the US in the early 19th century. Today, the Democratic Socialists of America’s organization is the only official member of the worldwide Socialist International party. In 2008, the US branch supported President Obama’s candidacy, but both the President and the organization deny his socialist-Marxist agenda. Bernie Sanders, however, openly declares himself a democratic socialist who extols the Scandinavian’s approach to the socialistic society.

The Republican Party is experiencing an anti-establishment insurgency too, while a political revolution swells nationally among angry citizens who feel betrayed by those they elected to stop the Obama agenda. Instead, the house and senate passed the $1.1 trillion 2,000-plus page omnibus bill that essentially pays off the donor class, lobbyists and advances Obama’s immigration agenda by more than tripling the number of H-2B visas for foreign workers looking for low-wage jobs in the agriculture industry and the entertainment industry such as theme parks and golf courses.

The Declaration of Independence clearly states that governments derive “their just powers from the consent of the governed.”

The Republicans dismissed the founding document’s philosophy and ruled without consideration to the mandate given them by their constituency.

The response from the voters is a new American Revolution — hopefully a velvet one rather than an iron fist.

The governed have been increasingly agitated with the political class over a number of years. The polling surveys confirm a growing sentiment.

In early 2010, a Rasmussen poll reported by the Washingtonblog.com found that:

“Seventy-one percent (71%) of all voters now view the federal government as a special interest group, and 70% believe that the government and big business typically work together in ways that hurt consumers and investors. That helps explain why 75% of voters are angry at the policies of the federal government, and 63% say it would be better for the country if most members of Congress are defeated this November…”

60% of voters questioned said neither party has a good understanding of the nation’s needs.

23% said that the two parties are “so much alike that an entirely new political party is needed to represent the American people.”

In the summer of 2011, the Washingtonblog.com reported a drop from 21% to 17% of Americans who believe the U.S. government had the “consent of the governed”.

Only 6% approved of the Congress. Their perception of congress is that they are “crooks”

Fox News contributor and well respected pollster, Patrick Caddell, has been predicting a revolution for several years. Caddell has referred to the recent political landscape as prerevolutionary, citing it as a “launch-pad” for outsider Donald J. Trump’s candidacy and party insurgents, Sen. Ted Cruz (R-TX) and Sen. Bernie Sanders (I-VT).

Caddell, conducting a multi-year series of the survey data from the “Smith Project” has synthesized the information to indicate a new paradigm is remerging; one that indicates the old order is in a death spiral as we witness a birthing of a new political order.

Caddell’s polling since 2013, shows two-thirds of Americans believe the nation is decline; that their children will be worse off, not better off than them. 75% believe that America is “a unique nation and that we should protect our unique character”.

The South Carolina exit polls surveyed what Americans are most concerned about:

When exiting voters were asked, “Which best describes your feelings about the way the federal government is working?” The South Carolina poll said that 92% of voters were dissatisfied or angry.

53% of the voters feel betrayed.

Nevada polls likewise confirm the populist revolution with approximately 60% caucasgoers saying they are angry and 35% are dissatisfied. Perhaps the greatest evidence was the large turnout of Nevada’s 75,000 voters, more than doubling the 2012 turnout of 33,000.

Let’s pray that this is a peaceful revolution.