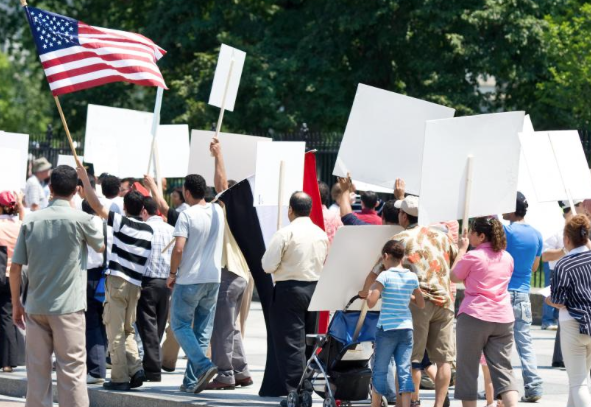 The vast power structures of the GOP, the donor class – especially the lobbyist and mega business class, the media, and the political class are crumbling as outsider Donald J. Trump and insurgent Ted Cruz challenge the established system, each in his own way, the above scripture has come to mind frequently.

“We The People” on the Conservative right have put our confidence in a two party system, the GOP, the advocate journalists and hosts such as Sean Hannity, Bill O’Reilly, Fox News media, advocate radio hosts such as Rush Limbaugh, Mark Levin, and Laura Ingraham. It took The New York Times to open the blinds to confirm what many of us were discerning, but out of a sense of loyalty, oscillated between gratitude toward their former service and bewilderment by their bad judgment as they aligned their talking points with Marco Rubio and technically the Gang of Eight. To learn that those we trusted were willing spokes people for the establishment to promote immigration legislation that would deteriorate our sovereignty, rule of law, and the best interest of the American system literally broke faith with us. It will never be restored. Policy making with the complicity of media is to me, akin to Joseph Goebble’s ministry. It’s unforgivable.

“Think of the press as a great keyboard on which the government can play.”–Joseph Goebbels

“A few weeks after Senator Marco Rubio joined a bipartisan push for an immigration overhaul in 2013, he arrived alongside Senator Chuck Schumer at the executive dining room of News Corporation’s Manhattan headquarters for dinner.

Their mission was to persuade Rupert Murdoch, the owner of the media empire, and Roger Ailes, the chairman and chief executive of its Fox News division, to keep the network’s on-air personalities from savaging the legislation and give it a fighting chance at survival.

Mr. Murdoch, an advocate of immigration reform, and Mr. Ailes, his top lieutenant and the most powerful man in conservative television, agreed at the Jan. 17, 2013, meeting to give the senators some breathing room.

But the media executives, highly attuned to the intensifying anger in the Republican grass roots, warned that the senators also needed to make their case to Rush Limbaugh, the king of conservative talk radio, who held enormous sway with the party’s largely anti-immigrant base.

So the senators supporting the legislation turned to Mr. Rubio, the Florida Republican, to reach out to Mr. Limbaugh.

The dinner at News Corporation headquarters — which has not been previously reported — and the subsequent outreach to Mr. Limbaugh illustrate the degree to which Mr. Rubio served as the chief envoy to the conservative media for the group supporting the legislation. The bill would have provided a pathway to American citizenship for 11 million illegal immigrants along with measures to secure the borders and ensure that foreigners left the United States upon the expiration of their visas.

It is a history that Mr. Rubio is not eager to highlight as he takes on Donald J. Trump, his rival for the Republican presidential nomination, who has made his vow to crack down on illegal immigration a centerpiece of his campaign.

Those discussions of just a few years ago now seem of a distant era, when, after the re-election of President Obama, momentum was building to overhaul the nation’s immigration system.

The senators embarked on a tour of editorial boards and newsrooms, and Mr. Rubio was even featured as the “Republican savior” on the cover of Time magazine for his efforts to change immigration laws. He already was being mentioned as a 2016 presidential contender.

Now Mr. Trump has become the Republican leader in national polls by picking fights with Mr. Ailes and offending the Latino voters whom Mr. Rubio had hoped to bring into the Republican fold. And while Mr. Rubio ultimately abandoned the bipartisan legislation in the face of growing grass-roots backlash and the collapse of the conservative media truce, he, and to a certain degree Fox News, are still paying for that dinner.

Fox’s ratings remain strong, but its standing among Republican viewers, influenced by Mr. Trump’s offensive, has dropped to a three-year low, according to YouGov BrandIndex. And Mr. Rubio’s opponents, for whom Mr. Schumer, a Democrat from New York, has become the ultimate villain, continue to depict the Florida Republican as a duplicitous establishment insider.

“If you look at the ‘Gang of Eight,’ one individual on this stage broke his promise to the men and women who elected him and wrote the amnesty bill,” Senator Ted Cruz said of Mr. Rubio during Thursday’s Republican debate. And as Mr. Rubio defended himself, Mr. Trump’s campaign manager, Corey Lewandowski, posted “MARCO ‘AMNESTY’ RUBIO” on Twitter.”

Andrew Breitbart: Death of a Hero