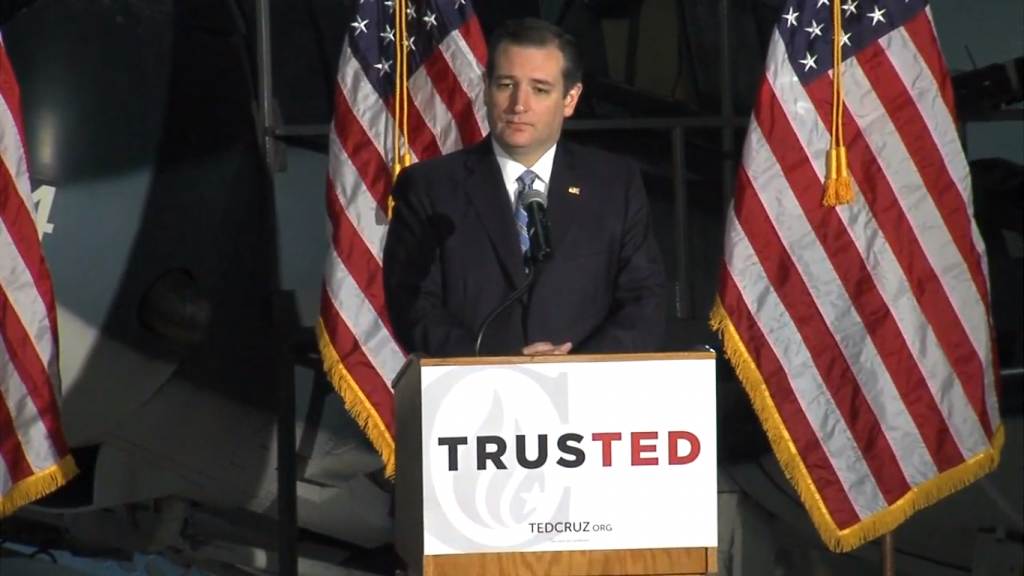 Presidential Hopeful Senator Ted Cruz unveiled a sweeping plan to rebuild the military in a speech Tuesday morning where he states has deteriorated under President Obama’s watch.

“For the past seven years, our nation has had a commander-in-chief who questions the value of American strength and denies our exceptional history,” Cruz said on board the USS Yorktown docked at Mount Pleasant, South Carolina. “His shrinking of America’s strength hasn’t inspired our enemies to imitate our pacifism, it has encouraged their aggressive behavior. He eagerly negotiates with terrorists and makes concessions to our enemies.”

“After seven years of neglect,” Cruz said, arguing that military agenda is at the bottom of President Obama’s agenda. “It is time for America to once again prioritize a strong, advanced and robust military.”

Introduced by former Texas Governor Rick Perry, the former two time presidential candidate praised Cruz as the candidate who is committed to the men and women of the military. He noted that as a former Air Force pilot, he depended on a checklist and believes Cruz, as president will do the same. “There is one candidate who I know every day that will operate from two checklists – the bible and the Constitution,” Perry said. “And that candidate is Senator Ted Cruz.”

“We will not go picking fights around the globe,” Cruz declared. “The purpose of rebuilding our military is not to intervene in every conflict and engage in expensive and protracted exercises in nation building in countries who have scant interests in the institutions we want to impose on them.”

Cruz outlined his specific blueprint plan to rebuild a deteriorated conventional and strategic force, adding, “More tooth, less tail, will be our guiding philosophy.” Under a Cruz Administration, the total active-duty force will increase to consist of 1.4 million soldiers, sailors, airmen, and marines with 525,000 trained and fully equipped Army soldiers, rebuild the Air Force of 6,000 airplanes with 1,500 being tactical fighter aircraft and 350 ships mixed of large and small surface and subsurface combatants.

“I am confident that if we put in the hard work, we can as Ronald Reagan once did in the 1980s rebuild our military so it will be feared by our enemies and trusted by our allies,” Cruz emphasized. “God willing, we won’t have to use it, but that is the essence of what President Reagan used to call ‘Peace through Strength.’”

In terms of cost, Cruz stated it won’t be “cheap or easy proposition,” but can be done by means of cutting federal spending by at least $500 billion over the next ten years, selling federal assets and properties to generate revenue and audit the pentagon, would be the plan to pay for the price tag for the envisioned plan. “If you think it’s too expensive to defend the nation, try not defending it,” Cruz argued. “This will be a challenge and it will involve difficult choices.”

“Rebuilding the American military will be one of the most serious tasks facing the next commander in chief,” Cruz added. “Our goal should not be to simply pour back into the Department of Defense the trillion of dollars President Obama so irresponsibly drained out, but rather to seize this opportunity to make a generational investment in our defenses to maintain a commitment to fiscal responsibility.”

At the end of his remarks, Cruz blasted the current administration handling of the crisis that occurred last month when Iranian forces captured 10 Navy sailors.

“Starting next year our sailors won’t be on their knees with their hands on their heads,” Cruz ended to loud applause from the crowd. “Our Secretary of State will not be apologizing and thanking their Iranian captors. Instead, they will be standing on the decks of the mightiest ships the world has ever known with their heads held high, confident that the great country that they volunteered to serve has their backs.”

South Carolina is home of many military members and veterans who are a critical voting bloc in determining which candidate will win the first in the south primary. With the primary just four days away, the hotly debated issue with no veterans running from the remaining six candidates, the fight to win their votes is heating up. As Cruz was detailing his plan, his fellow GOP rival, Senator Marco Rubio campaign sent out a fact sheet attacking his fellow colleague voting record on defense. “Cruz is pro-military when he passes a soldier in uniform, but he abandons that same soldier when he doesn’t vote to raise active-duty pay or provide our warriors the tools needed to accomplish their critical missions,” Rep. Mike Pompeo, a Rubio supporter, stated in the statement.

“I am grateful that South Carolina works to provide a wonderful home to our veterans, and even more so now under Governor Nikki Haley leadership,” Cruz said. “It’s time our national programs match that excellence.”

What Do Girl Scout Cookies, Doritos, and the Collective Voice Have In Common?