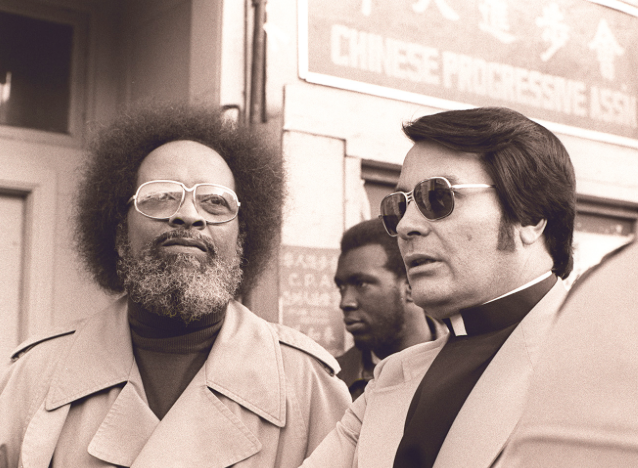 (From Editor:  This piece was originally published Sept. 24, 2012.  We like to re-release it from time to time as a reminder of how easily duped some people are…)

This man was all about “the People” and began his career as a community organizer.

Despite greatly benefiting from it, he despised capitalism and denigrated “millionaires and billionaires”.  He gathered the trust of the poor and oppressed by claiming he was a religious man.  Only after establishing their trust and devotion did he admit he was an atheist.

He claimed in a sermon that Jesus was a communist.

He was friend to many of the United States’ worldwide enemies, including the Nation of Islam, communist leaders, dictators and terrorists like Angela Davis.  In fact he was once described as a combination of “Martin King, Angela Davis, Albert Einstein…ChairmanMao.”

He was an excellent fundraiser and collected money from people throughout the world.

He hired media specialists to dispute any negative allegations made against him, including rumors that he had a homosexual affair.

He idolized Mao Zedong and carefully studied how Mao was able to overthrow the Chinese government.

No, he’s not Bernie Sanders, Barack Obama, or any number of progressives in America today; he was “Don’t Drink the Kool-aid” Jim Jones, founder of the Peoples Temple and the leader of one of the largest mass-suicides in history.

Jim Jones was obsessed with creating a ‘socialistic utopia’ in America and he realized the easiest way to manipulate the masses was by infiltrating religion. “How can I demonstrate my Marxism? The thought was, infiltrate the church,” Jones said, and soon after he created  The Peoples Temple Christian Church Full Gospel.  At a time when segregation was still occurring in America, Jones’ church was inter-racial and attracted thousands of poor and disadvantaged people.

After Jones was given tax-exemption status for his Peoples Temple church, he began openly telling outsiders that he was an atheist and communist.  He admitted in an article that he had learned the way to achieve social change through Marxism in the United States was to “mobilize people through religion.” In one of his California sermons, Jones said, “If you’re born in capitalist America, racist America, fascist America, then you’re born in sin. But if you’re born in socialism, you’re not born in sin.”

Jim Jones’ ultimate goal—much like the organizers of Occupy Wall Street–was to create a ‘socialist utopia’ in the U.S. but when he realized that wasn’t going to happen, he moved to a strip of land in Guyana which he renamed “Jonestown”.

Everything finally came crashing down when Jones learned that California Congressman Leo Ryan was coming to Guyana to investigate Jonestown for possible human rights violations.   Jones ordered some of his followers to murder Rep. Ryan, three journalists and a defecting Temple member in an ambush on a Port Kaituma airstrip. Backed into a corner, the master manipulator convinced his followers to participate in a “revolutionary suicide” by drinking cyanide-laced grape Flavor-Aide.  Jones had borrowed the term by Black Panther leader and Peoples Temple supporter Huey Newton who said, “the slow suicide of life in the ghetto ought to be replaced by revolutionary struggle that would end only in victory (socialism and self determination) or revolutionary suicide (death).”

On November 18, 1978, 909 inhabitants of Jonestown, 303 of them children, were found dead in and around a pavilion, including Jones who had died from a self-inflicted gunshot to the head.  The Jonestown suicides were the greatest single loss of American civilian life in a non-natural disaster until the 9/11 attacks.

“We didn’t commit suicide; we committed an act of revolutionary suicide protesting the conditions of an inhumane world,” Jones said in a tape recording made during the event.

In 2010 Jim Jones’ adopted son, Jim Jones, Jr. was on the Oprah Winfrey show.  He said, “I’m part of an organization that tried to build a new world.  Nine hundred people died, and I miss them every day. But I also recognize that they tried.  They tried something—they failed horrifically—but they tried, and out of that, I’ve taken a lot of pride to realize that I’m Jim Jones Jr.  I can’t hide from that.”

“There’s a lot of different kinds of people here who want to shift the paradigm to something that’s addressing the huge gap between the rich and the poor.” Susan Sarandon

“You’re talking about raising political consciousness so it spills over all parts of the country…in the end we’re really talking about what Martin King would call a revolution: A transfer of power from oligarchs to everyday people of all colors. And that is a step by step process.” Princeton University religion professor Dr. Cornel West

“We’re here to give everything from the people from whom you stole everything.”  Van Jones

“Let the ruling classes tremble at a communist revolution. The proletarians have nothing to lose but their chains. They have a world to win. Workingmen of all countries, unite!”  Karl Marx

#MonaLog: Nevada Caucus Edition and Beyond