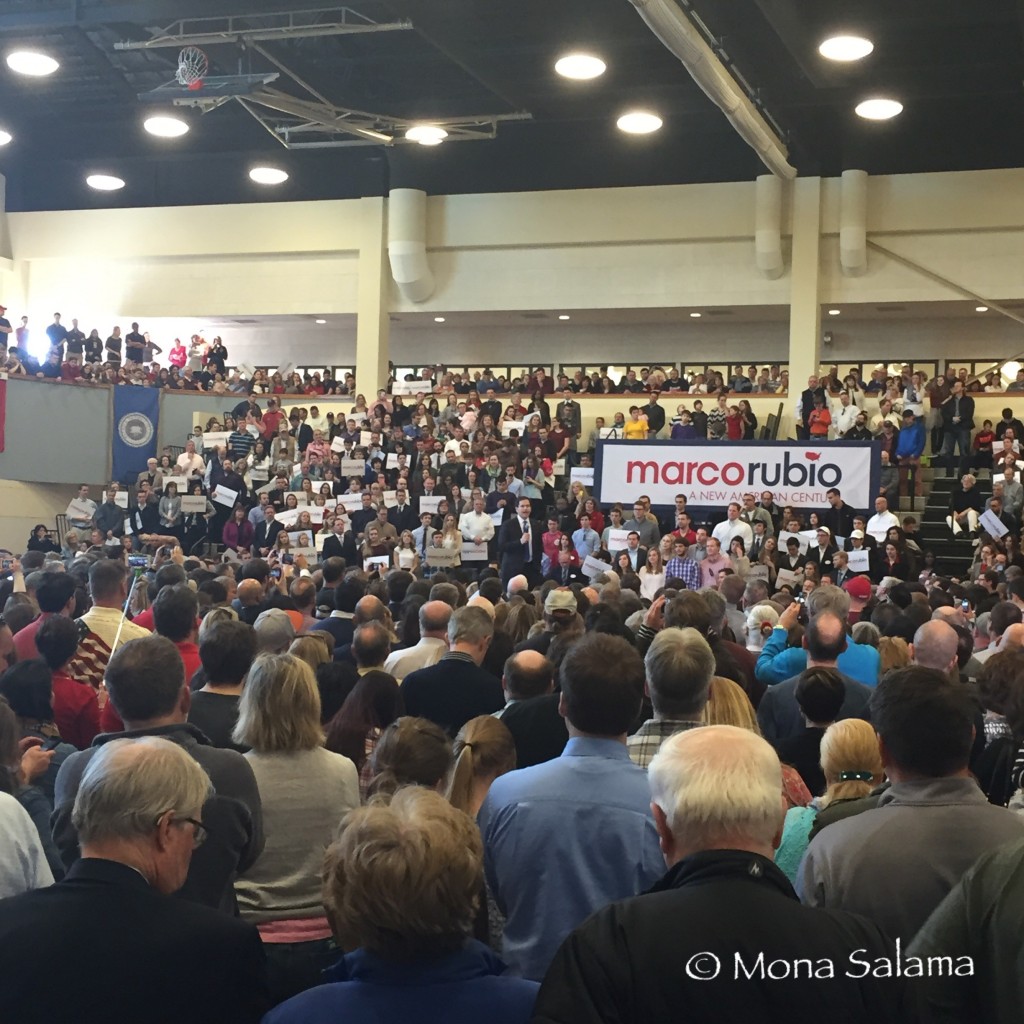 Purcellville, Va. — With Super Tuesday looming with the pathway to the GOP nomination looking dim, Senator Marco Rubio is looking to fight his way to beat the front-runner Donald Trump in the dirtiest way possible.

“Thursday night, I decided that it was time to unmask the true nature of a man,” Rubio said at a first of four campaign stops in Purcellville, Virginia. “You cannot have a policy debate with someone with no policies.”

Since last Thursday GOP debate, Rubio has spent the past few days hitting on the front-runner across the Super Tuesday primary states. With Trump as his biggest opponent in the Virginia polls, Rubio is taking his criticism of the front-runner to another level. Launching personal and harsh criticism against Trump, Rubio went on a 15-minute tirade calling his top rival a “con-artist”

“We are on the verge of nominating a con artist,” Rubio said, as the crowd of over 4,000 packed the school gymnasium floor began chanting “Marco! Marco! Marco!”

“If Trump gets the nomination,” Rubio added. “Republicans are going to lose the presidential election to Hillary Clinton or Bernie Sanders.”

On Sunday, as his rivals were zigzagging through different Super Tuesday states, Rubio took part of a day-long swing through different parts of the Old Dominion state. His Virginia strategy consisted of the Florida Senator holding rallies across the politically diverse state to target the different types of GOP voters from suburban areas in his favor as an alternative to Trump. This strategy provided some success for Rubio in South Carolina, where he won two of the largest counties in the state over Trump, but failed to gain any delegates there due to Trump winning both statewide votes and every congressional district.

A latest poll from CBS/YouGov in Virginia has Trump in the lead with 40 points to Rubio 27 points. Winning Virginia or at least closing the gap for second place is a must for Rubio to stay alive before he takes his campaign back home to Florida.

Rubio campaign stop across the state began in Loudoun County in the Patrick Henry College, a Christian school catered to the home-schooled community. Other stops throughout the day included the state’s capital of Richmond, a base of establishment voters and Virginia Beach to appeal to the large population of active and retired military personnel.

Prior to Thursday’s two-on-one handicap match of the GOP debate, former Ku Klux Klan grand wizard David Duke detailed his support for Trump on a Facebook post. During a press conference on Friday where NJ Governor Chris Christie shocked the political world by endorsing Trump, one reporter asked him about the endorsement from Duke in which Trump said he was unaware of that endorsement, adding “I disavow.”

Trump on Sunday during a CNN interview was pressed on repudiating the endorsement from former Ku Klux Klan grand wizard David Duke,” Trump said he needed more information before he could condemn Duke and white supremacists.

Rubio slammed Trump’s remarks stating the front-runner does know the leader and this is the reason that makes Trump unelectable. “[Trump] has an interview on CNN and was asked repeatedly to repudiate David Duke, who is a well know white supremacist racist and he said he doesn’t who David Duke is,” Rubio said. “But the fact is, at some point 15 years ago when Trump was thinking about running for president in the Reform Party, one of the reasons why he said he wasn’t going to run is because David Duke is part of the Reform Party. So he knows exactly who David Duke is.”

He added, “We cannot be the party that nominees someone who refuses to condemn white supremacists and the Ku Klux Klan.”

Midway through his remark, Rubio was met with two protestors holding signs that read “Marco Rubio, Empty Suit,” while holding a clothing hanger. “Marco Rubio, empty suit,” Rubio said reading the sign. “My suit wasn’t made in China. It’s not a Trump suit.” Supporters around where the protestors were holding the sign wrestled to take the signs away with one man was able to take the sign and rip it up to shreds before throwing it up in the air like confetti.

“Ladies and gentleman, the valedictorian of Trump University,” Rubio said to cheers and laughter from the audience.

Once the attacks on Trump ended, Rubio went on to talk about his personal life story and the American dream, a story he frequently brings up during his events.

“My story is the story of America,” Rubio said. “The first words my father learned in English were ‘I’m looking for a job.’”

He also touched on a number of issues in his remarks where he vowed when elected to repeal Obama’s executive orders, reform the Veteran’s administration, rebuild the military as “Reagan-style” and step up on the War of Terror.

Before Rubio took the stage, Rep. Barbara Comstock, who represents the district where the rally was held and former Governor George Allen both spoke to endorse the Senator. Former Attorney General Ken Cuccinelli was also present at the rally, but for a different reason. A Ted Cruz supporter, Cuccinelli spoke with reporters after the event to address the recent feud between Rubio and Trump as well as to make the case for reporters to be prepared for a shock after Tuesday.

“Cruz will be pulling away votes from Marco this Tuesday and on Wednesday it’s going to be time for Marco to drop out, Cuccinelli told PolitiChicks. “Marco will do pretty well in Northern Virginia with the government Bush people who served in his administration who still live up there. But we have the best grassroots ground game in Virginia and we will perform well to come out with a lot of delegates as well as Cruz finishing ahead of Rubio on Tuesday if you put it all together.”

Cuccinelli added that he thinks Rubio should drop out after Tuesday because “he will get killed in Florida.” When asked by PolitiChicks if that situation of Rubio staying and the race becomes a three-man race with Cruz, Rubio and Trump staying until the time New Yorkers heads to the polls in April if he thinks a broker convention can happen. “There is a good chance of it to happen,” he replied. “That’s entirely more possible than it has ever been before. It’s literally the best chance since 1976.”

Most of the 4,000 supporters in attendances were millennial with majority of them coming from DC and Virginia area to see Rubio before they head to vote on Tuesday. PolitiChicks spoke to one supporter who gathered twenty of his friends who are DC and Northern Virginia Young Republicans to get a feel of why many educated millennial are mostly supporting Rubio over Cruz and Trump. “Rubio reflects my ideals in what the Republican Party needs to be,” Rob Towner said to PolitiChicks. “This is the party of success, security, and allowing the free market to flourish so that we can feel the economic and societal successes that comes with it. Rubio is the right man that has the right balance and tenacity to become president.”

Ending his remarks, Rubio stressed the importance of voters coming out to vote on Tuesday, but to choose the right Republican candidate.

Has Trump Crossed a Line on Freedom of the Press?