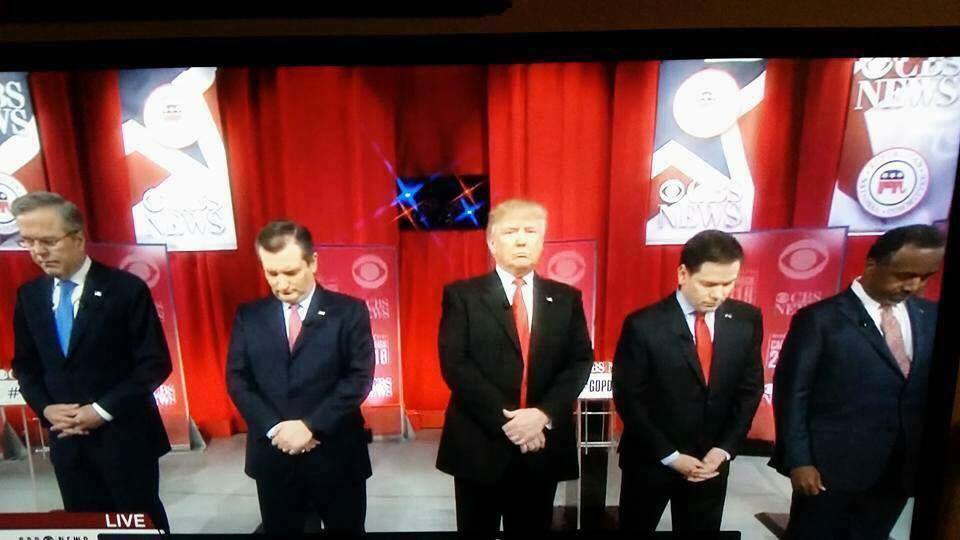 The Republican presidential field faced-off again at the Peace Center in Greenville, South Carolina, on Saturday night, as the pack finally narrowed down to only six candidates.

The debate began on a somber note with the news of Justice Antonin Scalia, one of the most conservative justices, passing away in Texas on Saturday morning. There was a moment of silence in his honor.

The candidates were in agreement that Scalia’s death was a huge loss for our country and that his death could ultimately shift the ideological balance of the Supreme Court. They also weighed in on whether or not President Obama should appoint another justice during his remaining time in office.

Donald Trump remarked: “This is a tremendous blow to conservativism, it’s a tremendous blow, frankly, to our country.”
When it comes to President Obama appointing a new justice, Trump responded, “I think he’s going to do it whether I’m okay with it or not. I think it’s up to Mitch McConnell and everybody else to stop it. It’s called delay, delay, delay.”

Marco Rubio stated: “Someone on this stage will get to choose the– the balance of the Supreme Court. And it will begin by filling this vacancy that’s there now. And we need to put people on the bench that understand that the constitution is not a living and breathing document. It is to be interpreted as originally meant.”

Jeb Bush said: “The simple fact is, the next president needs to appoint someone with a proven conservative record, similar to Justice Scalia, that is a lover of liberty, that believes in limited government, that consistently applied– that kind of philosophy, that didn’t try to legislate from the bench, that was respectful of the constitution, and then fight and fight and fight for that nomination to make sure that that nomination passes.”

Ben Carson stated: “We should be thinking about how can we create some healing in this land. But right now, we’re not gonna get healing with President Obama. That’s very clear. So I fully agree that we should not– allow a judge to be appointed during his time.”

John Kasich added: “I do wanna take a second as we reflected on Judge Scalia, it’s amazing. It’s not even two minutes after the death of Judge Scalia, nine children here today, their father didn’t wake up– his wife– you know, sad, but– you know, I just wish we hadn’t run so fast into politics.”

If viewers were looking forward to a backyard brawl, the candidates certainly didn’t disappoint. In fact, it didn’t take long before the debate took and ugly turn and they began scrapping over foreign policy, immigration, who’s the biggest liar, who could (or couldn’t) speak Spanish, and yes, even over certain family members (…as in Jeb’s brother, former president George W. Bush).

Trump and Bush began by clashing over how to handle the crisis in Syria.

Bush then accused Trump of getting his foreign policy advice from the “shows,” adding, “This is a man who insults his way to the nomination.”

The crowd booed at his remarks.

Bush struck back, saying, “I’m sick and tired of Barack Obama blaming my brother for all of the problems” he faces. Then he took a jab at Trump, saying, “While Donald Trump was building a reality TV show, my brother was building a security apparatus” to keep the country safe.”

Trump fired back at Bush, claiming that it was under his brother’s watch that the World Trade Center was attacked on September 11, 2001.

Rubio then jumped in to defend to George W. Bush.

“He kept us safe and I’m forever grateful.” Rubio also added, “The terrorist attacks of 2001 happened because Bill Clinton failed to kill Osama bin Laden when he had the chance.”

Cruz and Rubio also went at it (again) over immigration and the ‘gang of eight’ bill.

Cruz claimed there was a “sharp difference on immigration” as he took a swipe at Rubio, “When Harry Reid and Chuck Schumer and establishment Republicans were leading the fight to pass a massive amnesty plan,” Cruz said he was on the team to defeat what he referred to as the “Rubio-Schumer amnesty plan.”

When Cruz said Rubio has a long record of supporting amnesty and referenced remarks he had made on Univision about keeping Obama’s executive amnesty, Rubio fired back, “I don’t know how he knows what I said on Univision because he doesn’t speak Spanish.”

(sidenote: Rubio did not refute that he made those remarks on Univision).

Trump also called Cruz “the single biggest liar.” Of course, this was after Cruz accused him of supporting partial-birth abortions, and defending Planned Parenthood, and also suggesting that he would appoint liberal justices to the Supreme Court.

“This guy lied about Ben Carson when he took votes away from Ben Carson in Iowa,” Trump said, a reference to the Cruz camp incorrectly telling Iowa caucus-goers that Carson was dropping out of the race on the night of the caucuses.

Trump said about Cruz: “This guy will say anything — nasty guy.”

Cruz fired back at Trump, accusing him of hypocrisy, noting that the businessman had recently called Carson “pathological” and compared Carson to a child molester.

Kasich added his two cents to the brawl by saying, “I think we’re fixing to lose the election to Hillary Clinton with all this fighting.” Although, Bush didn’t hold back in criticizing the Ohio governor for expanding Medicaid under ObamaCare and said that it would create more debt.

Carson remained above the fray by avoiding the mudslinging altogether.

The Saturday night spotlight was also on  Rubio after his disastrous debate debacle in New Hampshire. He appeared to perform much better in South Carolina.

The CBS debate is the final one before the South Carolina Republican Primary on Feb. 20. With six more days until the primary, most polling still shows Trump and Cruz in the top two positions with Rubio in third.

Finishing fourth in Iowa and last in New Hampshire, Carson still plans to continue on the campaign trail. In an interview with PolitiChicks, he said, “I plan to get in front of a lot of audiences, to do a lot of interviews, a lot of radio and try to give people a real understanding of what I’m about.”

Why Did Obama Quote Muhammad's Endorsement of Caliphate?