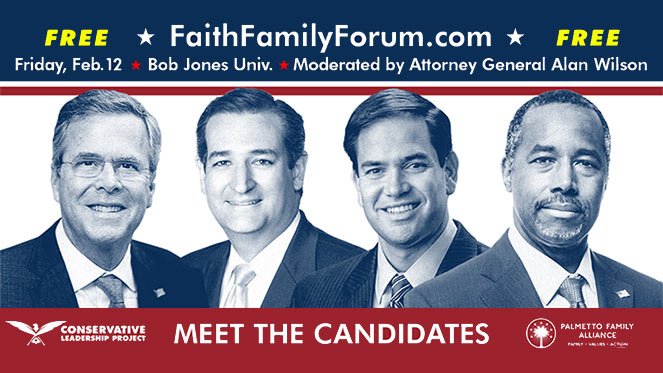 Four out of the six Republican presidential hopefuls took part in a discussion centered around faith and family issues a day before the GOP debate Friday afternoon at the Bob Jones University in Greenville, S.C.

Hosted by the Conservative Leadership Project, Dr. Ben Carson, former Governor Jeb Bush, Senator Marco Rubio, and Senator Ted Cruz spoke to 2,000 voters separately during a Q&A sessions moderated by South Carolina Attorney General Alan Wilson and Oran Smith, head of the Palmetto Family. Evangelicals are one of the key voting bloc in South Carolina which holds the next Republican primary election next Saturday on the 20th.

All four candidates who took part at the Faith and Family Candidates Forum were asked the same questions during their one-hour time on a wide range of issues in which each candidate responded to how faith would influence their decisions as president if elected. Absent from the forum was Donald Trump and Governor John Kasich, the two candidates who came in first and second in New Hampshire. Trump had a stand-in surrogate, Pastor Mark Burns, as the front-runner skipped the candidates forum to hold a rally in Florida.

All the candidates stressed the importance of appointing conservative Supreme Court justices to the bench. Rubio said he wished the Supreme Court was made up of nine justices just like Clarence Thomas and Antonin Scalia. Carson pointed out how lifetime appointments of Supreme Court justices should be “reexamined” adding he would select one by quoting Scripture – “By their fruits, you will know them.” Cruz reminded the crowd that the next president will be in charged of nominating three, possibly four new Supreme Court justices, noting “we are one justice away from a radical five justice majority.”

On the issue of the Supreme Court decision regarding gay marriage, Carson denounced the ruling, citing how secular progressives negate the bible but are trying to take away Christians’ rights. “No one gets the right to redefine everything for everyone else and make them conform to that,” Carson said, drawing loud applause and a standing ovation from the crowd. “If you can negate this part of the Bible or that part of the Bible, you can negate the whole thing.”

Carson added “Everybody, according to our Constitution should be treated equally and should have the same rights,” he said. “But no one gets extra rights. Nobody gets the right to redefine everything for everyone else and then make them conform to that.”

Cruz called the 2015 ruling was one of the “greatest tragedy” from the court. “The gay marriage decision was five unelected judges inventing a right no where in the Constitution, ignoring the text of the Constitution and tearing down the marriage laws of all 50 states.”

Bush told the forum how faith was a “guiding light” that helps with his influencing his choice when he was governor. “I don’t believe you put your faith in a lockbox in public life.”

He also went after the front-runner for his recent insults and remarks, calling it unbecoming, arguing a president is a leader who sets a good moral tone. “I mean is anybody here worried about the front-running candidate shouting out obscenities in front of children?” he said that led to applause from the audience. “The public persona of the presidency has the power to influence the behavior of the public.”

Cruz gave a story about how faith helped to bring his family together, going into details of how his father briefly left his family but found Christ and overcame his addiction to alcohol, and reunited with his mother. “I am a Christian and my faith is integral to who I am,” he said. “I have been saved by grace and it has transformed my life and my family life.”

All the candidates were shown parts of the notorious videos of planned parenthood where one person talks about selling aborted fetus. “Every time I see that, it makes me sick to my stomach,” Bush said. “Horrible. That is why we need to defund Planned Parenthood and I did that when I was governor.”

“How can God bless a society that has no regard for human life and that is selling body parts?” Carson said. “It’s unbelievable. We can’t let the secular progressive rob us of our family and identity.”

Cruz called the video “horrifying” while delivering a blow to Rubio, who he stated his fellow colleague didn’t stand with him last fall to strip federal funding from the organization in light of the videos emerging. “My friend Marco Rubio has spoken out against Planned Parenthood, but when the videos came out, I stood with millions of Americans calling on the Republican leadership to use the power of Congress to defund Planned Parenthood and Marco stood up and said, ‘No, we shouldn’t,” Cruz alleged. “That’s a mistake. so [Rubio] and I disagree on that. I believe if we had leaders that we committed to stand together and say ‘We are not going to send 500 million dollars of taxpayer funds to Planned Parenthood, we could have defunded it in the wake of these videos.”

On the issues of drafting women into combat, Rubio told the crowd that he doesn’t support drafting women into combat positions. The issue was brought up from last week New Hampshire GOP debate where Rubio stated that Selective Service registration should be open to both men and women. He addressed how he had no problem with women serving in combat roles, a remark that drew heavy criticism before the New Hampshire primary. “I don’t support drafting women and forcing them to be combat soldiers,” Rubio stated. “We should never lower our combat standards in order to achieve some sort of societal messaging. You have to be physically qualified and that is true for both genders in order to do the work.”

Rubio then added: “We need to recognize today that there are women in the military that may not be directly in combat but are serving basically combat-like roles that put their lives in danger.”

New Video "It Feels Good To Be a Clinton" Will Make Hillary MAD.

Equality Now! Even for the Draft