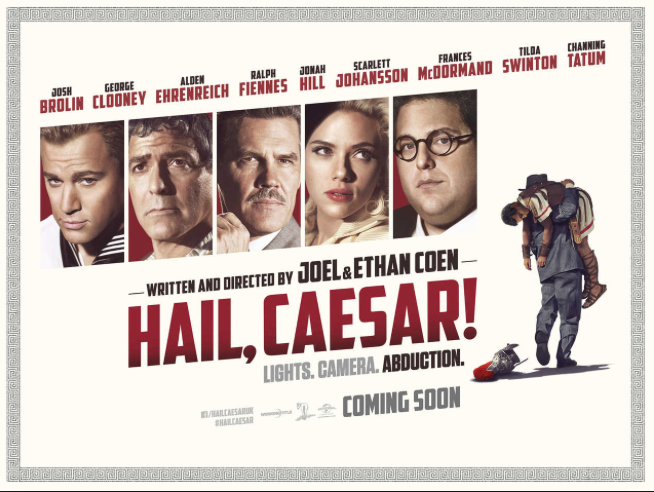 First of all, I must admit, I am a huge fan of old Hollywood films. Since the brilliant Coen Brothers have delivered outstanding films in the past (“Fargo”, “True Grit”, etc.), I was hopeful “Hail, Caesar!” would at the very least be entertaining (even with Clooney in it!), but it was so much more. Brilliant, hilarious and a film you could see several times to fully appreciate all the clever symbolism–so unlike the usual Hollywood film when they are depicting their own.

The story follows the life of Eddie Mannix (Josh Brolin), a Hollywood fixer whose job is to keep stars in line at Capital Productions in the 1950’s. Mannix handles stars such as Hobie Doyle (Alden Ehrenreich), a lovable and athletic singing cowboy as the studio plunges Doyle into soapy dramatic films as well as DeeAnna Moran (Scarlett Johansson), an Esther Williams type, who personal escapades may damage her wholesome image. When shooting is near completion on Capitol Pictures epic biblical film, “Hail, Caesar!” star Baird Whitlock (George Clooney) is drugged and kidnapped by two movie extras who transport him to the hideout of a group witless and smug Hollywood communists. Whitlock is held for ransom as the pretentious group of writers convinces Whitlock their goal to sabotage films with communist rhetoric are worthy. Mannix, whose rough exterior hides a Christian and family man interior, must find Whitlock and bring him back to complete production.

Josh Brolin (Eddie Mannix), Channing Tatum (Burt Gurney), Ralph Fiennes (Lourence Laurentz) Scarlett Johansson (DeeAnna Moran) and Tilda Swinton (Thora and Thessaly Thacker) are excellent in their roles, but Alden Ehrenreich (Hobie Doyle) stands out with perfection in this glowing cast. I was shocked to see the communist depicted as real and comically ridiculous as the usual Hollywood fair is to martyr or deny they existed. An especially delightful and meaningful scene is when Mannix (Brolin) slaps Whitlock (Clooney) as Whitlock spews out the communist rhetoric he has heard as Mannix reminds him the worth of the picture always comes first (in my mind, symbolism indeed!).

Who/What is NARAL and Why Are They Terrified of Doritos and a Humanized Baby?

Escapee of Communism Asks: When Did America Start Looking Up to Europe?