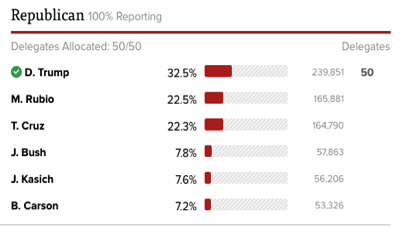 After winning the South Carolina primary and sweeping all of the 50 Republican delegates, Real Estate mogul Donald Trump has solidified his position as the candidate to capture the party’s GOP nomination.

“There is nothing easy about running for president,” Trump said to an exciting support crowd gathered in Spartanburg, S.C. “It’s tough, it’s mean, it’s nasty, it’s vicious, it’s beautiful. When you win, it’s beautiful and we are going to start winning for our country.” 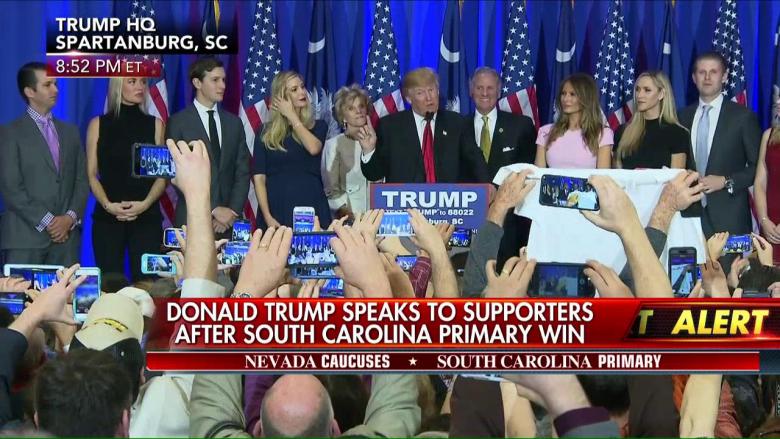 Surrounded by his family members, Trump paid a quick tribute to Cruz and Rubio, as negative attacks and hardball tactics marked all three of their campaigns during their intense week campaigning in the Palmetto State. “I want to also congratulate Ted and Marco, who did a really good job,” Trump said to boos from the audience before adding, “Ok, we go back to war tomorrow morning.”

Trump didn’t mention anything in regards to Bush dropping out of the race. However, he did mock the political pundits who have bashed Trump by giving their take on ways to take him down by combining votes of candidates with no shot of winning. “These geniuses,” Trump said with a sarcastic tone. “They don’t understand that as people drop out, I’m going to get a lot of those votes also. You don’t just add them together.”

He concluded his speech by telling supporters to help him “put this thing away” as the five remaining candidates head to Nevada for the caucuses on Tuesday and a week later as they enter into the 13 “Super Tuesday” states.

Cruz and Rubio Battle For Second

After Trump was declared winner with less than ten percent reported, the fight everyone was watching was who would take second place amongst the two young Senators.

Cruz finished third after 100% reporting with Rubio edging out in second gaining 22.5% of the votes to Cruz 22.3%.

Rubio, who came to South Carolina after an embarrassing fifth place showing a week before in New Hampshire, revived his momentum after receiving the endorsement from Governor Nikki Haley days before the primary. 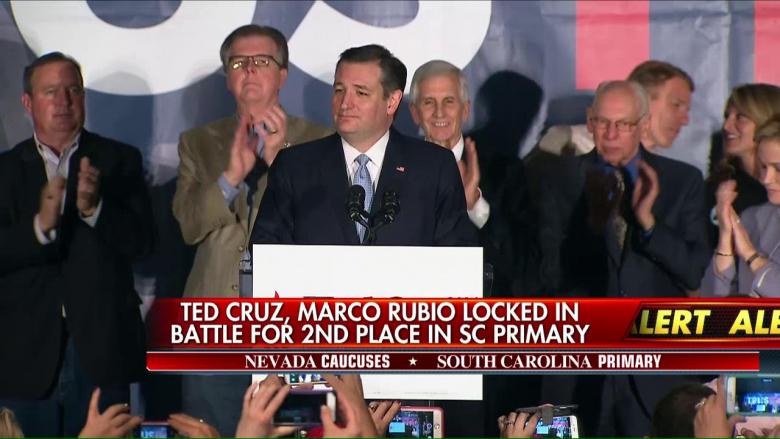 Speaking last out of all the candidates, Cruz portrayed his lock in battle for second place as something of a victory. “Friends, once again we have made history,” Cruz said as he recalled on his win from the Iowa Caucus. “Tonight, despite millions and millions of dollars of false and nasty attacks, despite the entirety of the political establishment coming out against us, South Carolina has given us another remarkable result.

Cruz was hoping for a repeat of the Iowa caucus, as his candidacy was depended primarily on courting evangelicals and tea party conservatives. However a disappointing blow to Cruz’s victory was Trump winning the evangelical voters by 32% to 27% for Cruz.

Although he congratulated Trump for his victory, Cruz downplayed his victory to argue he is the best candidate to beat Trump. “I congratulate Donald on his victory tonight, but I will say this to the people of America, if you don’t believe that Trump is the best candidate to run against Hillary Clinton in November, then we welcome you aboard our team,” Cruz said. “Only one conservative is in a position to win this race, we are the only campaign that has beaten, and can beat, Donald Trump.” 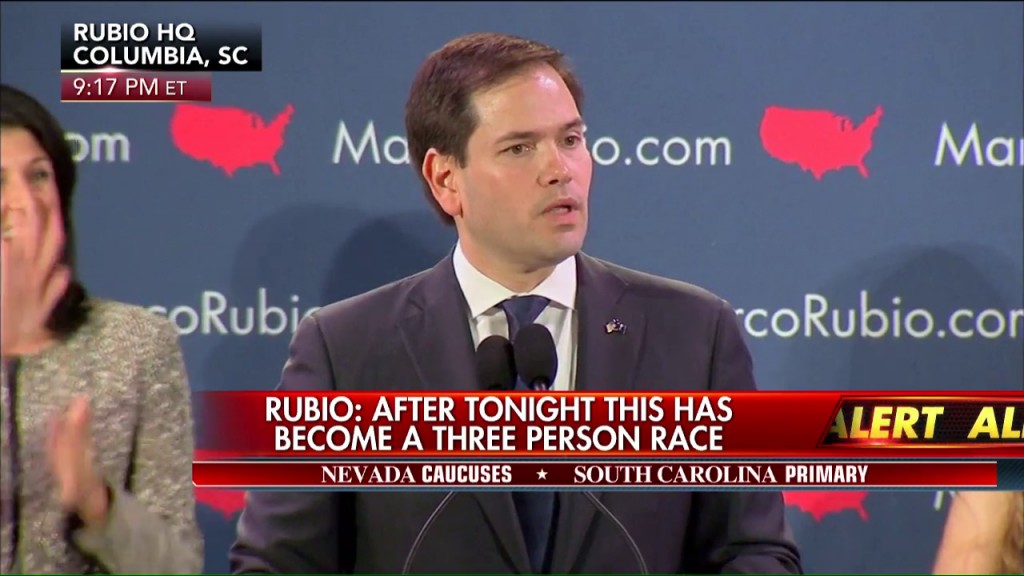 Rubio, on the other called this race a ‘Three-way race’ as he framed his second place showing as a revival he need to survive going forward. “Ten days ago their son arrived in South Carolina, after a difficult election in New Hampshire, in search of a new beginning and a fresh start,” Rubio told supporters in Columbia, South Carolina. “And many thought it was over. Somehow doubts about whether we would wind up here even now. For me the state of South Carolina will always be the place of new beginnings and fresh starts.”

Rubio added, “After tonight, this has become a three-person race, and we will win the nomination.”

Both Senators began their speech praising Jeb Bush, who suspended his presidential bid an hour before both took to the stage. “Jeb Bush was the greatest governor in the history of Florida and I believe and I pray that his service to our country has not yet ended.” Cruz called Bush, a man who” brought honor and dignity to this race… who ran a campaign based on ideas, based on policy, based on substance.”

The question now remains; will either Cruz or Rubio have the ability to take Trump down as Super Tuesday looms near?

With Trump winning South Carolina primary while Rubio and Cruz were vying for second place, Jeb Bush presidential ambition came to an end in the same state that once resurrected both his father and brothers presidential campaigns.

“The people of Iowa and New Hampshire and South Carolina have spoken, and I really respect their decision, so tonight I am suspending my campaign,” Jeb said 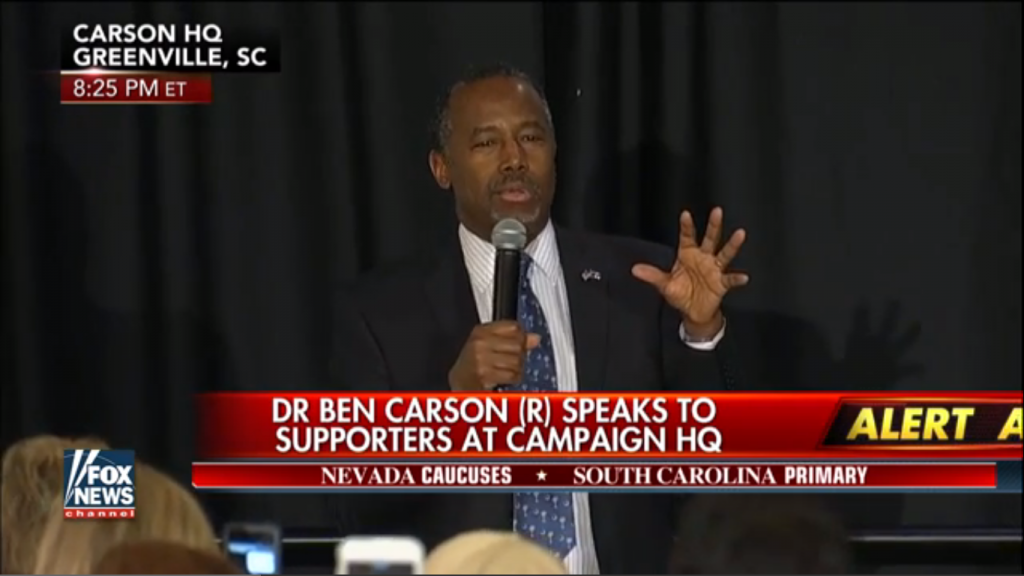 After finishing in sixth place, by gaining only about 53,000 votes in the South Carolina primary, Ben Carson says he isn’t giving up nor is he quitting the race.

“When this thing started, there were 17 candidates, there are only six now and I’m still one of them,” Carson said to supporters during his primary watch party in Greenville, South Carolina. “And I’m not going anywhere.”

With only 50% of the votes reported, Carson took to the stage to thank his supporters and to tell his supporters his campaign is just the beginning to take his message of taking power away from the political class to give it back to the people.

“It’s we the people who really have the power and this is the message that I am going to be taking across the nation to try to help the people of America recognize that we still have the ability to dictate the course of our country and save it for the next generation,” Carson said. “Our nation is very close to going off the cliff and… we need is recognition of the fact the way our country was designed, it was designed for citizen statements not career politicians. Right now there is a political class that consists of the Washington establishment and the news media and the pundits. And they believe that they have complete control of our country.”

As the front-runner Donald Trump was declared winner with just 8% reporting, Carson sought to distinguish himself as the true outsider in the race by taking a small jab against the winner of the South Carolina primary. “As time goes on, more and more people will actually begin to be serious and actually look at actually policies and solutions to the problems, rather than just hear rhetoric and loud boisterous speech,” Carson stated.

“And when that happens, I think you are actually going to see a significant change in what is going on in our country. The tide will begin to change.”

A Reminder to Call Your Parents and Grandparents. NOW.

The Case of Mohammed and Aisha