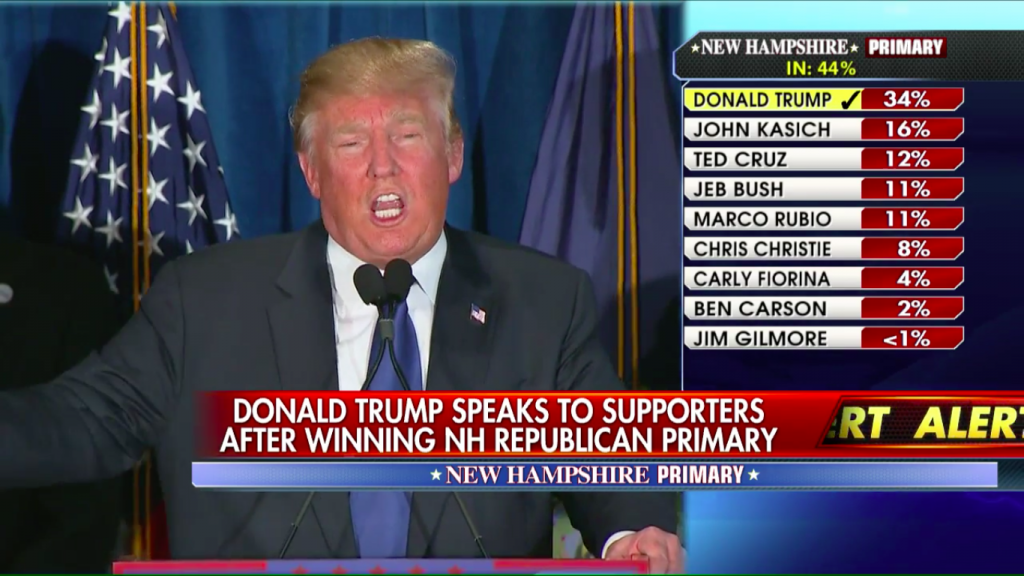 After coming second in Iowa Caucus, real estate mogul Donald Trump has won “Yuggeee” in the Granite State, making clear his candidacy is in for the long run.

Surrounded by his wife and kids, the real estate kicked off his speech congratulating his Republican rivals while thanking his family including his late parents. “I want to thank everybody, but I really have to begin by paying homage to my parents,” Trump said at his primary watch party held in Manchester, New Hampshire. “We have to thank the candidates, we have some really talented people who a number of them called, and I just wanted to thank them.”

Gaining 35% of the votes with only less than 50% reported, Associated Press and ABC News projected Trump the winner shortly after 8p.m. For months, polls conducted in New Hampshire showed Trump in first place with a commanding a double-digit lead while the second place leader had half of his poll numbers. The enthusiasms behind Trump official win highlight voters angry the current political system with majority of his supporters wanting an outsider to win the nomination.

His stirring speech included famous talking points he uses frequently in rallies. “We are going to make America so great again, maybe greater than ever before,” Trump said as the excited crowded chanted, “USA, USA!” “I am going to be the greatest jobs president that God ever created.”

Trump also congratulated Democratic primary winner Senator Bernie Sanders but criticized the democratic socialist. “[Bernie] wants to give away our country, we are not going to let it happen.”

Such a great experience in New Hampshire – amazing people! Will be leaving for a big event in South Carolina today. 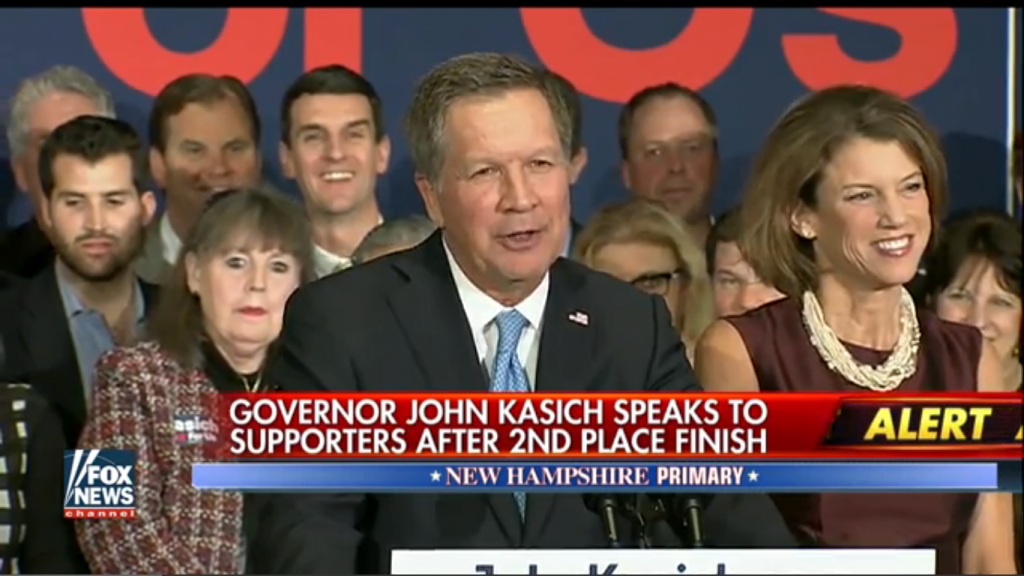 The key second place winner in the Republican contest went to Ohio Governor John Kasich who received over 16% of the votes. His surprise win landed him the spotlight, beating Jeb Bush, Marco Rubio and Chris Christie —all who were fighting to win the establishment lane ticket as an alternative to beat either Ted Cruz or Donald Trump.

His victory came largely at the expense of Rubio and Christie clash debate performance Saturday night before the primary, which ultimately halted the Florida senator momentum and destroyed Christie chances of winning of a strong finish in New Hampshire, coming in sixth place behind Bush and Rubio.

Kasich credited his win for his positive campaigning, refusing to go after candidates and holding over 100 town halls in the Granite State. However, the former Congressman and current Governor said he is ready to fight if push comes to shove it. Bush spokesperson Tim Miller gave sharp attacks after the Governor spoke, calling him a non-viable threat for the nomination while adding, “Kasich for 20 years has been a supporter of gutting the military.” Military plays a big issue for voters concerns in the South Carolina, the next state candidates are looking to add on to their new momentum. Expect Kasich vs. Bush duel in the upcoming week before Palmetto voters hit the poll sites on February 20. 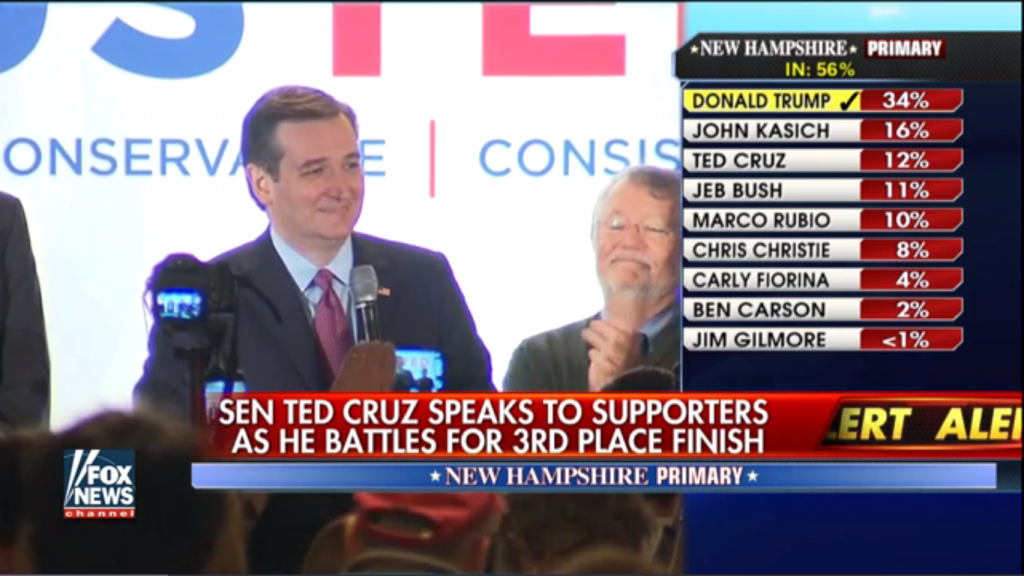 The Iowa winner and a favorite amongst social conservative shocked the nation on Tuesday with his third place win, beating establishment candidates former Governor Jeb Bush and Senator Rubio, all who were all tied for third place after news outlets called Trump and Kasich winners of first and second place just shortly after 9pm.

“I want to congratulate Donald Trump on an impressive win tonight and John Kasich had a good night tonight,” Cruz said as the crowd elicit boos. “But the real winner is the conservative grassroots, who propelled us to outright victory in Iowa and a far stronger result and outcome in New Hampshire than anyone had predicted.”

Cruz was seen less likely to win the top three spots with his vocal social conservative appeal in a state that is considered moderate. But Cruz defined all odds to beat the expectation in the live free or die state, showing he is in good shape to compete for the party nomination and possible win against a democratic candidate come time for the general election.

“Because of tonight, the voters will have a clear choice,” Cruz told supporters in his primary watch party in Hollis, New Hampshire. “We are here because of you because of your passion for our nation.”

Winning 12% and able to receive 3 delegates, Cruz along with Trump win have shown fear amongst establishment who are struggling to find an alternative candidate to take down either of the top two leading candidates after Rubio poor debate performance before the primary which caused the Florida senator to come fifth in New Hampshire. Many who see Kasich chances of winning South Carolina and the SEC primary as unlikely, for they see his second place victory as a one-time hiccup win. As for Bush, it remains to be an option, depending on whether he can gain enough traction to add on to his small momentum to become a real contender as they hoped before Trump entered the race.

“And so now on to South Carolina, on to Nevada, on to Super Tuesday,” Cruz concluded in his short subtle speech. “We have put Washington on the run and tonight’s outcome is a victory for ‘We the People.’” 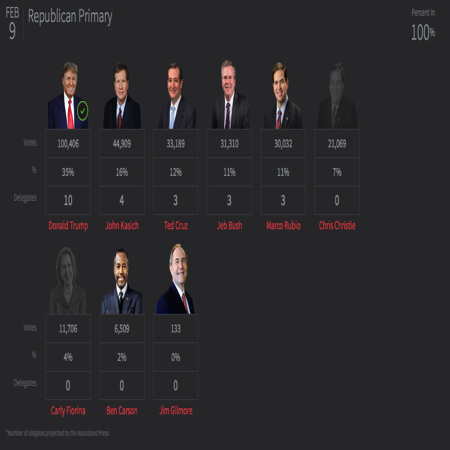 Marco Rubio: "I did not do well on Saturday night"