Headlines: Donald Trump super trifecta; Marco Rubio has “gone to sleep” instead of holding a election rally; while Ted Cruz is looking ahead to Super Tuesday 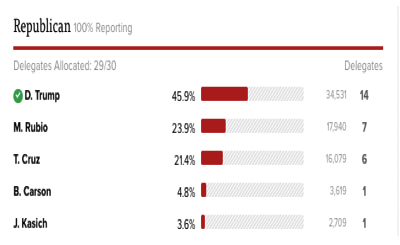 Countdown: One day until the tenth #GOPDebate in Houston, Texas; 6 Days until Super Tuesday

With victories in the Northeast, the South and now the West, Donald Trump is now one step closer to securing the GOP nomination within reach. 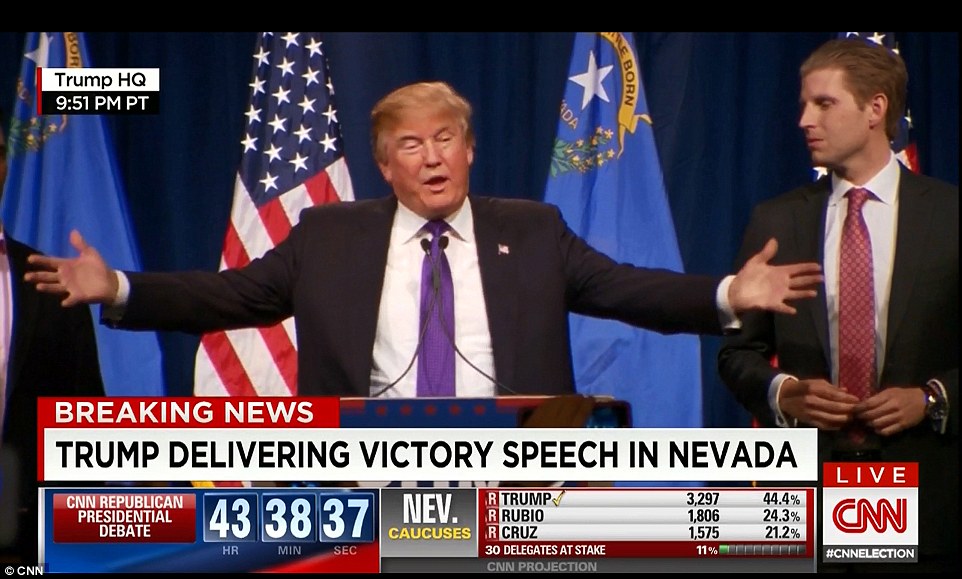 Trump was called the winner shortly after the caucuses closed by numerous news outlets. With just 3% reported, Trump had a remarkable 45.9% of the vote. Looking ahead to Super Tuesday next week where 13 states are holding contests that will decisive impact the narrative of this Republican primary, Trump called out the home states of his remaining rivals, Texas and Ohio to brag on his lead in the polls and to predict a victory in those upcoming states.

“It’s going to be an amazing two months,” Trump said. “We might not even need the two months to be honest.”

Ted Cruz: “One week from today will be the most important night” 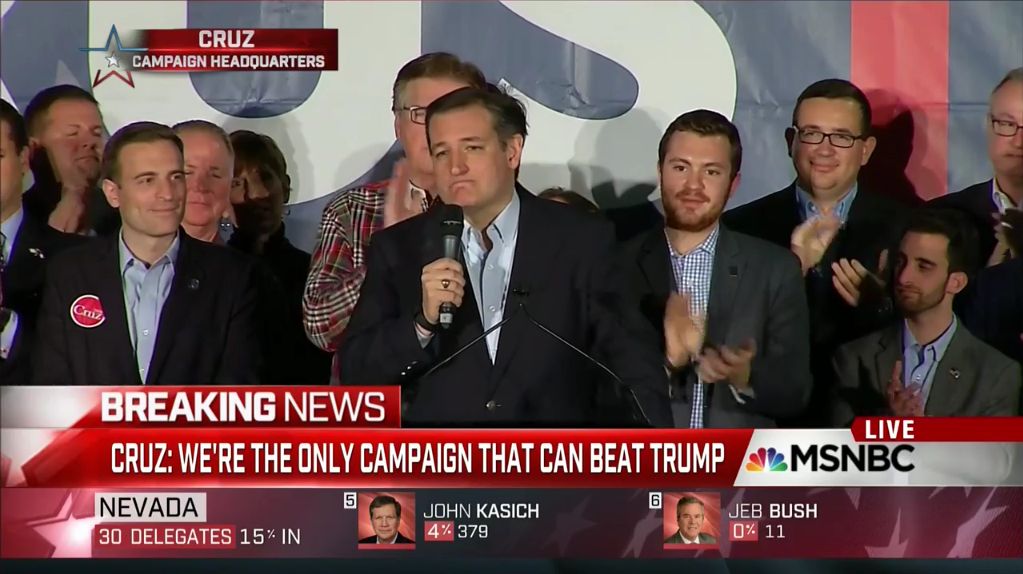 Shortly after Donald Trump was declared winner of the Nevada caucus, there was yet again another repeat for
the battle for second place between Ted Cruz and Marco Rubio.

Cruz addressed his supporters at his election night rally in Las Vegas, where he stressed the importance of Super Tuesday and that “most of the delegates that are awarded on a single day.”

“One week from today will be the most important night of this campaign,” Cruz said to supporters in a YMCA venue in Las Vegas. “The role of the first four states is to narrow the field and give Super Tuesday a clear choice for voters to decide.”

Even though losing to Trump, Cruz in his speech congratulated Trump on his win, but reminded his supporters that he is still the only candidate who could beat the front-runner. “They are still counting the ballots so we don’t know the exact results, but I want to congratulate Donald Trump on a strong evening,” Cruz said. “And I want to congratulate the grass roots, the conservatives across this country who have come together behind this campaign.”

Cruz continued with his speech to pitch his campaign as the alternative to Trump. “If you are one of the 65% of Republicans across this country who doesn’t think Donald is the best candidate to go head to head with Hillary, then the first four state have performed a vital function of narrowing this race and presenting a clear choice,” he said. “You can choose between two Washington deal makers, or one proven consistent conservative.”

Heading to Super Tuesday, Texas is one of the 13 states set to hold a contest and also a state where 155 delegates are up for grabs. According to a new poll released by Houston Public Media, Cruz has a double-digit lead over Trump in his home state. The Texas Senator has 35% of supporter of likely Republican primary voters, followed by Trump, who has 20% and Rubio has 8%.

“Tonight, I’ll sleep in my bed for the first time in a month, and then it will be back to the campaign trail in Texas and all across Super Tuesday,” Cruz said ending his speech. 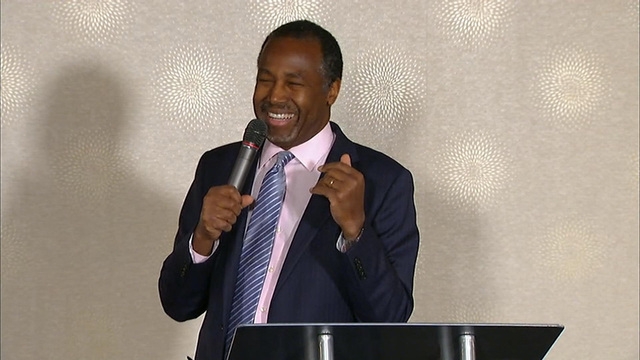 Ben Carson Isn’t Giving Up Yet

Coming in a distant fourth in the Nevada caucuses, Ben Carson says he still plans to stay in the race and people will coalesce his way soon enough.

“I believe that things are starting to happen,” Carson said in his speech to supporters in Las Vegas. “What will eventually happen is that the people, we the people will actually want to hear real solutions. It’s just a matter of time before they start demanding answers, and start demanding solutions.”

With just 20% reporting, Carson earned 5.6% of the votes. After his speech, his campaign released the following statement on the Nevada Caucuses.

“Contrary to the popular slogan, “What happens in Vegas stays in Vegas,” Dr. Carson encouraged a ballroom full of supporters that the results of the Nevada caucuses could lead the rest of the nation to reverse course for a brighter future.

With only four states having cast votes for the Republican presidential nomination, Dr. Carson stands among the top four candidates in the Nevada outcome of the original 17.  He is deeply humbled and encouraged by the support he continues to receive across the country, as his consistent message of faith, integrity and common sense solutions resonates across all demographics. He continues to be viewed more favorably than any other candidate and consistently polls as the most honest and sincere person in the race. With less than 200 delegates decided, Dr. Carson is encouraged by the upward momentum he has experienced over the past two months and looks forward to Super Tuesday.

I want to thank my many supporters and volunteers in Nevada and across the country. While professional politicians have long written off our efforts to return the government to the people, we remain undaunted. We’ve barely finished the first inning, and there’s a lot of game left. I look forward to the debate in Houston this Thursday and then on to Super Tuesday, sharing my message to ‘Heal, Inspire, and Revive’ this great nation. As more Americans have their say, they will see the true strength of our movement.”

"Don't Drink the Kool-Aid!" Study of an American Cult Leader

Trump: They've Had Enough And They Aren't Going To Take It Anymore