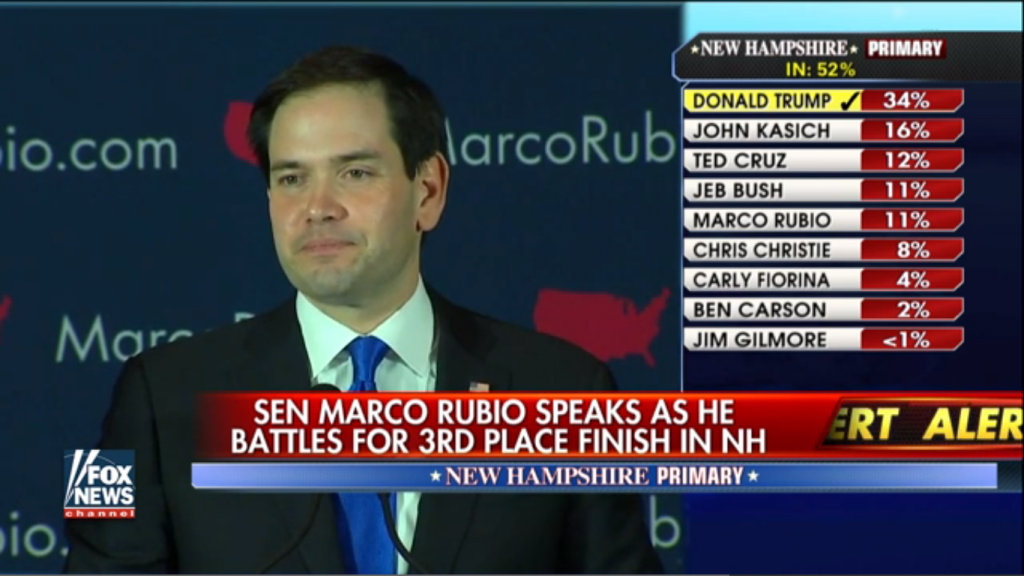 Live in Manchester, N.H. — After his surprising third-place showing in the Iowa Caucus just last week, Florida Senator Marco Rubio was expecting his momentum to carry on to New Hampshire but fell short tonight, coming in fifth place.

“Our disappointment tonight is not on you, it’s on me,” Rubio said to over 200 supporters who gathered for his primary night party held at the Radisson Hotel in Manchester, N.H.

Rubio admitted his disappointing showing in the Granite State was due in part to his poor debate performance. “I didn’t do well on Saturday night,” Rubio added. “But listen to me – That will never happen again.”

The admission from Rubio was unexpected as he spent the last three days before the primary defending his debate performance. He told supporters during his many town halls across the Granite State that his repetitive message was deliberate and important to remind voters of the past seven years under President Obama. During one of his stops today, Rubio told reporters, as he was shaking hands outside a polling location that his debate performance wouldn’t have real impact while adding that he raised a lot of money within that hour than in any other previous debates. “National media narrative doesn’t impact voters, especially in a place like New Hampshire,” Rubio said. “These are serious voters, people who have taken their time with the candidates and get to know the issue better than anybody I have ever interacted with.”

Rubio suffered a huge knockout at the hands of Governor Chris Christie during Saturday nights GOP debate. In one of the most heated and unforgettable debate showing that will forever haunt Rubio this election cycle occurred when Christie called out Senator for giving a “memorized, 25-second response.” Rubio responded to Christie’s attacks by repetitively giving the same answers three times during each exchange, “Obama knows what he is doing,” showing that Christie’s critique was proven right all along.

While supporters gathered in the event hall in the Radisson hotel, PolitiChicks spoke to a supporter to get a feel of whether the debate performance hurt Rubio standing in New Hampshire. “I believe Saturday did hurt Rubio badly,” Raul Blancet said to PolitiChicks. “I voted for [Rubio] this morning, even though the debate brought him down. But what Governor Christie did hurt the only respectable and a winnable candidate for the Republican Party.”

Exit polls released just hours before the New Hampshire primary closed its doors for voting to shed some light on what was to expect before the results were called. According to CNN exit polls, about two-thirds of New Hampshire voters said the recent debate played an important role in their choice of voting.

Rubio’s debate performance ultimately did cost him the establishment crown where he was expected to come in second tonight based on poll numbers. Had Rubio came in second place, his win and momentum would have eliminated the other candidates, in particular the governors who are also vying for the establishment title. However, after tonight, surprising second place victory from Governor John Kasich and Governor Jeb Bush came in fourth, both Governors are expected to continue on for much longer than expected.

As for Christie, it is still unclear if he will continue on to South Carolina due to his disappointing showing in New Hampshire. Coming in sixth place, just behind Rubio, Christie hoped a second or third place victory tonight would help boost his chances to go forward in terms of money and support. His attacks on Rubio did more harm to both candidates than good as Rubio acquired a new nickname “Robot Rubio,” and Christie supporters ultimately turned off by his brash bully tactics. The kamikaze attack from Christie shined a new light to Kasich and Bush; as they both were able to boost their governors’ resume that night and ultimately their primary results standing.

As for Christie to continue with his run looks grim. He only has $1 million left in his campaign war chest and has no ground force in South Carolina; it is likely he will be the next candidate to drop out from this crowded field. During his concession speech, Christie announced that he has canceled his plans tomorrow in South Carolina to return home to take a “deep breath” and reassess his prospects. “Mary Pat and I spoke tonight and we’ve decided that we’re going to go home to New Jersey and we’re going to take a deep breath, see what the final results are tonight,” Christie said in his speech in Nashua. “There is no reason to go and sit in South Carolina in a hotel room to hear the results. We will make a decision on the next step forward based upon the results that come in here completed here in New Hampshire.”

While supporters waited for Rubio to take the stage, many watched the results report coming in from FOX News as well as other candidates’ speeches. Real estate Donald Trump was projected the winner of the Granite State, garnishing at that point a victory of 35% with only 25% precinct reported. Once Rubio took the stage with his family right beside him, he began his concession speech telling supporters he called Trump to congratulate him. “About 40 minutes ago, I called Donald Trump,” Rubio said to loud boos from the audience. “No, no, no — He worked very hard and he earned this victory and I congratulated him on that.”

Wrapping up his remarks that lasted only nine minutes, Rubio thanked his supporters and looked ahead to the next contest, all which will play a pivotal role for his presidential ambitions. “New England, Maine, Vermont, Massachusetts, we will see you in a few weeks where we are going to come and win, and South Carolina, we are on the way” Rubio declared as he walked off the stage.

Now as the race heats up with no GOP candidates suspending their campaign tonight, most will head to the Palmetto State on a red eye where Trump still holding a huge lead followed by Cruz. With the field still crowded, Rubio will have to make the case to voters and campaign contributors that New Hampshire debate performance and the results following was just a hiccup and he is still the only viable candidate, according to one-on-one polls to defeat both Democratic candidates Hillary Clinton and Bernie Sanders.