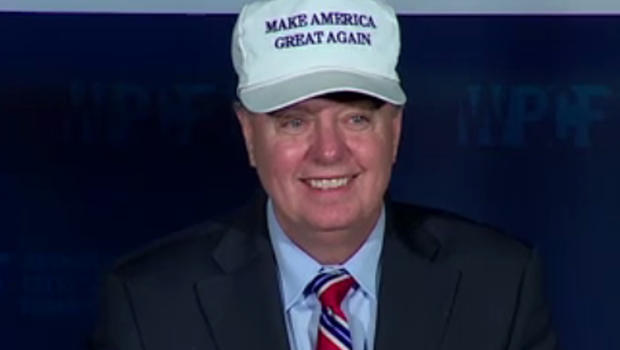 He may not have been on the debate stage in Houston last Thursday night, but Senator Lindsey Graham expressed tough words for his former Republican rivals during a speech in Washington last night.

“If you kill Ted Cruz on the floor of the Senate, and the trial was in the Senate, nobody could convict you.”

His lame jokes about Cruz didn’t stop there. He went on to criticize the Texas Senator for being born in Canada. “I know exactly when Ted is going to drop out of the race,” Graham said. “March 12. That’s Canadian week in Myrtle Beach.”

The “Bro with no ho” Senator continued to mock the rest of the current 2016 GOP field. He mocked Marco Rubio for his water quench saying if elected “ the secret service main job will be to keep the ‘Boy Wonder ’ hydrated, “the nice guy” Ben Carson for his troubling teenage past, and “the moderate” John Kasich for recent comment about “women leaving the kitchens.”

“How did I lose to these guys?” Graham asked after mocking his rivals.

The comment that has dominated the headlines, something the Senator isn’t use to seeing, was at one point he mocked Democratic front-runner Hillary Clinton and then after unleashed on his own party,

“The most dishonest person in America is a woman who is about to be president,” Graham said. “How can that be? My party has gone bat —- crazy.”

On the front runner Donald Trump, someone who he has criticized frequently during his short lived presidential bid and after when endorsing Jeb Bush, Graham paused his roasting to supposedly give his take on the front-runner . “Donald, I don’t think he understands what makes America great,” Graham said in a more serious tone while urging reporters to ask Trump harder questions. “Our party and our country is going to have to step up its game.”

At the end of his speech, House minority leader Nancy Pelosi handed Graham a Trump baseball hat with his logo ‘Make America Great Again.’ Graham decided to make a joke about Trump where he then decided to put on the cap and reminded the room of his failed bid and his endorsement to Jeb who recently ended his bid to point out his curse that now he wants to pass Trump.

“I endorse Trump and I hope that Graham magic still exists,” he said calling himself the “Dr. Jack Kevorkian of the Republican Party.”

The New America Revolution Is On!