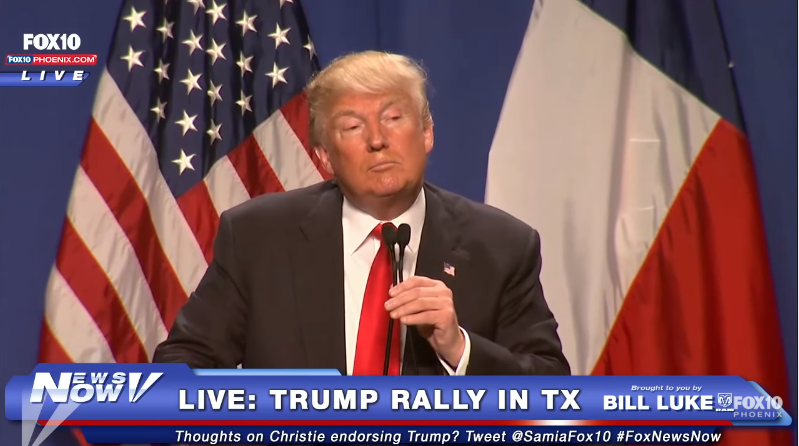 Donald Trump hates the media. That is no secret. In what may be his most frightening words yet, the presidential hopeful launched into a tirade against the media at a rally in Fort Worth, Texas, on Friday night, in which Trump essentially vowed to take down freedom of speech and freedom of the press.

Donald Trump has gained much attention for his bold challenges to the status quo and politics as usual. He has tapped into the frustration that many Americans share about the broken promises and ineptitude of Washington politics. People tend to either love him or hate him. His disdain for the media often gains Trump passionate cheers from audiences.

But has he gone too far this time?

A number of journalists seem to think so. From CNN to the Washington Post to Breitbart and PolitiChicks, media outlets are blasting the news of Trump’s alarming position against the First Amendment. Though at first glance, he may seem to have some points, the ramifications of what he is suggesting are staggering.

In this rant against the media, he gives us a glimpse into what he really thinks about freedom of the press and freedom of speech:

If I become president, oh, do they have problems. They’re going to have such problems.

We’re going to open up those libel laws, so that when the New York Times writes a hit piece which is a total disgrace, or when the Washington Post, which is there for other reasons, writes a hit piece, we can sue them and win money, instead of having no chance of winning because they’re totally protected.

There are already laws in place against libel and slander. But Donald Trump says he wants to extend those laws to punish anyone who writes any “negative” articles. This would undercut the very fabric of the Freedom of the Press and the purposes envisioned by the Founding Fathers.

The right to disagree with someone in government or in authority is a fundamental American right, and it is secured by the First Amendment. The impact of laws such as Trump is suggesting would be utterly chilling to free speech and liberty. While libel is considered a criminal act, publishing something negative is not. Donald Trump’s proposal, which was surprisingly met with cheers, crosses a line that would lead to tyranny.

A politician has an affair – that is negative. Would a newspaper be able to be sued for reporting the affair? Could they be sued for reporting on a governmental agency taking away citizens’ constitutional right to due process? What if they report the negative effect that an elected official’s policies have had on the economy? The list is endless.

There is a clear distinction between publishing libel and publishing negative information. Limits such as Donald Trump proposes could be devastating to the most basic freedoms enjoyed by American citizens.

Rubio in Virginia Ahead of Super Tuesday: “Donald Trump is a Con Artist”