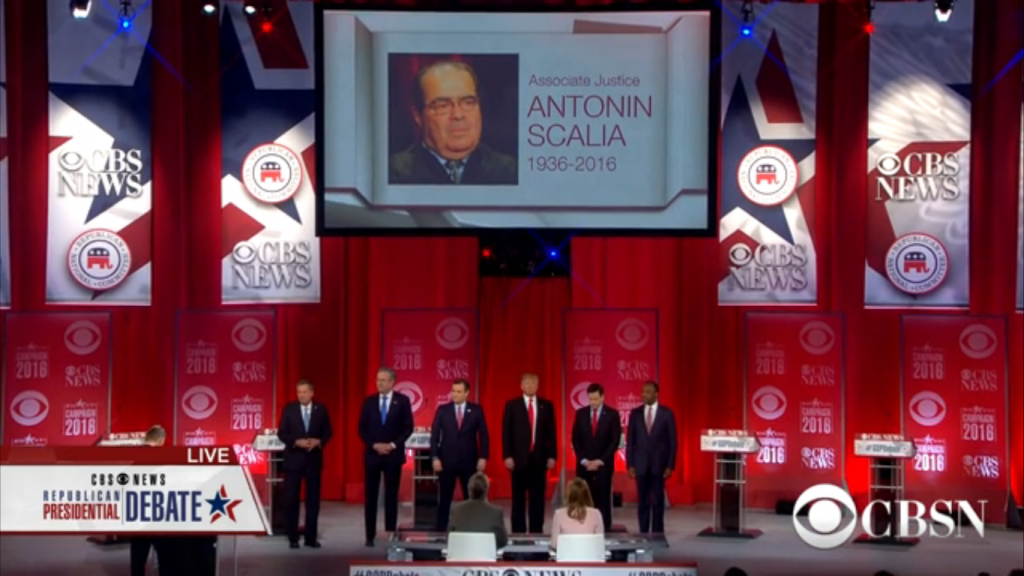 The death of Supreme Court Justice Antonin Scalia sent shockwaves though the political world just hours before six GOP hopefuls took to the stage to face off in the ninth GOP debate in South Carolina, the final debate one week before South Carolina primary

The debate began with CBS moderator John Dickerson calling for a moment of silence for the justice who passed away at the age of 79. As expected, the first question centered around whether President Obama should nominate a successor with just eleven months left in his term.

Here are the six candidates responses:

Donald Trump was asked if he were president and had a chance to fulfill the vacancy with a conservative justice would he do so.

Trump: “If I were president now, I would certainly want to try and nominate a justice. I’m sure that, frankly, absolutely sure that President Obama will try and do it. I hope that our Senate is going to be able – Mitch and the entire group is gonna be able to do something about it, in terms of delay.”

When ask to clarify if he is okay with the President nominating somebody, Trump said, “I think he is going to do it whether I’m okay with it or not. I think it’s up to Mitch McConnell and everybody else to stop it. It’s called delay, delay, delay.”

Ohio Governor John Kasich was ask what he thinks about Senator Reid remarks of failing to fill [Justice Scalia] vacancy is a “shameful abdication of one of the Senate’s most essential constitutional responsibilities.”

Kasich: “I just wish we hadn’t run so fast into politics. Here’s my concern about this. The country is do divided right now, and now we are going to see another partisan fight taking place. I really wish the president would think about not nominating somebody. If you were to nominate somebody, let’s have him pick somebody that is gonna have unanimous approval and such widespread approval across the country that this could happen without a lot of recrimination but I don’t think that is going to happen.”

Ben Carson was asked on what does the Constitution say about whose duty it is here to act in this kind of a situation.

Carson: “Well, the Constitution actually doesn’t address that particular situation. But the fact of the matter is, the Supreme Court obviously is a very important part of our government system. When our Constitution was put it place, the average age of death was under 50, therefore the whole concept of lifetime appointments for Supreme Court judges and federal judges was not considered to be a big deal.”

Carson added that President Obama shouldn’t nominate a judge due to the divisiveness going on in this country. “I looked at some of the remarks that people made after finding our that Justice Scalia had died, and they were truly nasty remarks,” Carson said. “We should be thinking about how we can create some healing in this land. But right now, we are not gonna get healing with President Obama. So I fully agree that we should not allow a judge to be appointed during his time.

Florida Senator Marco Rubio was asked two question, first as a lawyer if he can address the issue of whether the Constitution states who has the power to appoint Supreme Court justices and second if he agrees in the idea of removing a filibuster motion for Supreme Court nominations as a Senator . Rubio began his remarks paying tribute to the late justice before answering the two part question he was asked

Rubio: “Let me first talk about Justice Scalia. This loss is tremendous, and obviously our hearts and prayers go out to his family. [Scalia] will go down as one of the great justices in the history of this republic.”

On who has the power to appoint a justice, Rubio stated, “I don’t believe the president should appoint someone and it’s not unprecedented. In fact, it’s been over 80 years since a lame duck president has appointed a Supreme Court justice.”

On the idea of the senate removing the filibuster for Supreme Court nominations, Rubio said he is not in favor of dropping the threshold. “No, I’ve never been. Today, according to the changes Harry Reid made, appellate judges can now be appointed by simple majority but not Supreme Court justices. And I think today, you see the wisdom of why we don’t want that to change. Because if we were not in charge of the Senate, Harry Reid and Barack Obama would ram down our throat a liberal justice like the ones Barack Obama has already imposed on us.”

Former Florida Governor Jeb Bush was asked whether he would impose a litmus test for a justice nominee.

Bush: “Not on specific issues, not at all. If I’m president, I will appoint people, I will nominate people that have a proven record in the judiciary. The problem in the past has been we have appointed people thinking you can get it through the Senate because they didn’t have a record. The simple fact is, the next president needs to appoint someone with a proven conservative record, similar to Justice Scalia, that is a lover of liberty, that believes in limited government, that consistently applied that kind of philosophy, that didn’t try to legislate from the bench, that was respectful of the constitution, and then fight and fight and fight for that nomination to make sure that that nomination passes.”

Bush added the president has the right to nominate but there should be a “consensus orientation” for that nominee. “Of course the president, by the way, has every right to nominate Supreme Court justices. But in return for that, there should be a consensus orientation on that nomination,” Bush said. “And there’s no doubt in my mind that Barack Obama will not have a consensus pick when he submits that person to the Senate.”

Senator Ted Cruz was asked why he doesn’t think the President should appoint a new justice.

Cruz: “Well, we have 80 years of precedent of not confirming Supreme Court justices in an election year,” Cruz would say before Dickerson began to interrupt. From there Cruz and the moderator debated on Cruz statement on whether any justices had been nominated, but not confirmed, in an election year. From there Cruz continued on answering the question. 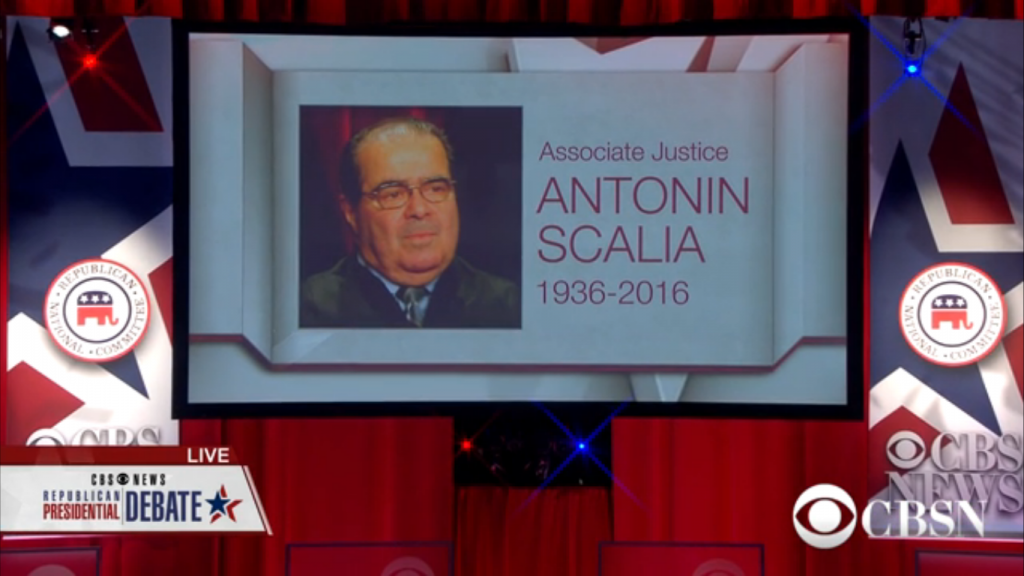