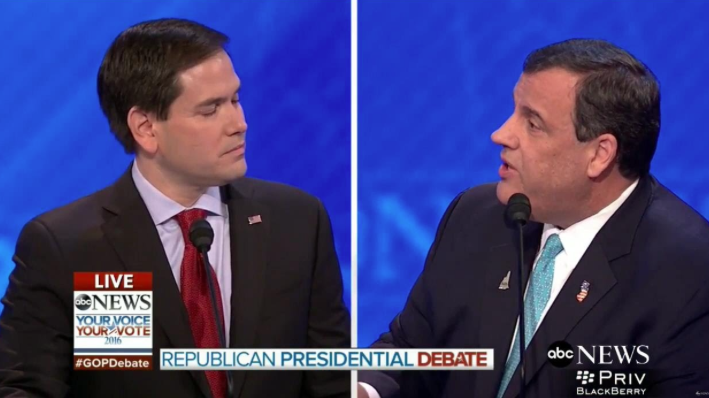 Capturing headlines with his strong third place finish in the Iowa caucus, Senator Marco Rubio became the prime target of the Saturday night GOP debate against a governor who had nothing left to lose.

Rubio entered New Hampshire this weekend with a high momentum. Each of his town hall events across the Granite State was packed.  He raised $2 million in one day after the caucus, and received a wave of endorsements from senators such as Tim Scott, Pat Toomey, influential state party leaders and two former GOP candidates, Governor Bobby Jindal and Senator Rick Santorum.

The increased popularity of Rubio over the past week has led to a heated battle for the establishment lane as three other mainstream rivals look to halt his momentum to stay alive. Prior to the GOP debate, New Jersey Governor Chris Christie called Rubio “a boy in a bubble,” claiming he has done little since winning his Senate seat while being incapable of moving past his standard stump speech he repetitively uses throughout the campaign trail.

The attacks escalated at the final Republican GOP debate before the New Hampshire primary on Tuesday. Held at Saint Anselm College in Manchester, New Hampshire, the exchange between Christie and Rubio began early in the debate when the Senator was asked to name some of his accomplishments in the senate. Rubio was given redemption to salvage his “accomplishment record” when he was asked to name them to the audience. His latest endorsement from former GOP candidate Senator Rick Santorum already damaged the Senator by giving his rivals enough ammo to attack before Rubio could even say ‘welcome to my team Santorum.’ In an interview by Joe Scarborough, Santorum was asked to name one of Rubio accomplishment but struggled to even name one, going off tangent to avoid the question.

“Let me say, from protecting the people of Florida from eminent domain abuse, bringing accountability to the V.A., Girls Count Act, I am proud of my service in the Senate.” Rubio said listing some of his Senate accomplishments. “And let’s dispel once and for all with this fiction that Barack Obama doesn’t know what he’s doing. He knows exactly what he’s doing. Barack Obama is undertaking a systematic effort to change this country, to make America more like the rest of the world.”

Christie was then asked about his recent criticisms of Rubio’s experience. He attacked Rubio track record of missing votes all. “The fact when you talk about the Hezbollah Sanctions Act that you list as one of your accomplishments you just did, you weren’t even there to vote for it,” Christie pounced. “That is not leadership, that is truancy.”

Things would escalate further when Rubio tried to blast Christie’s governing record. “Under Chris Christie’s governorship of New Jersey, they’ve been downgraded nine times in their credit rating,” Rubio said in defense. However, the Senator again would go off topic to recite his stump speech attack line on President Obama, a line that was exactly delivered word-by-word in his last response.

Before Muir could even try to stop Christie from the annulation, the New Jersey Governor would interject to respond back to Rubio’s repetitive attack. “That’s what Washington, D.C. does,” Christie said to loud cheers from the audience. “The drive-by shot at the beginning with incorrect and incomplete information and then the memorized 25-second speech. When you are president, the memorized 30-second speech where you talk about how great America is at the end of it doesn’t solve one problem for one person.”

Rubio tried to turn the tables on Christie by accusing him of not wanting to do his job as Governor. He mentioned a recent major snowstorm hitting New Jersey, where the media twisted Christie words stating that he wasn’t planning to return to his home state to instead campaign in New Hampshire. “Chris, your state got hit by a massive snowstorm two weeks ago. You didn’t even want to go back. They had to shame you into going back,” Rubio fired back. “And then you stayed there for 36 hours and then he left and came back to campaign.”

And yet again, it would seem that Rubio became delusional when he returned to the subject of Obama and used the same exact talking points he said previously. Here’s the bottom line,” Rubio repeatedly said that led to boos from the audience. “This notion that Barack Obama doesn’t know what he’s doing is just not true. He knows exactly what he’s doing.”

“There it is,” Christie fired back, interrupting Rubio mid-sentence. “The 25-second memorized speech. He gets very unruly when he gets off his talking points.”

Uttering the same phrase four times during the eight-minute brawl as the five other candidates stood in silence watching Christie mauled Rubio in the one-on-one face off. By exposing Rubio as a carefully rehearsed candidate during their exchanges, it proved Christie point in front of millions of Americans. At the end, the damage to Rubio will slow his momentum and possible keep the field crowded until possibly Super Tuesday.

Its do or die for Christie. Focus heavily on New Hampshire; Christie has to come out strong if he wants to turn a potential victory into a national momentum. However, with Christie dropping in the polls and only $1 million left in funds, he needed a breakout moment during the last debate before Tuesday’s primary to show he is still a viable candidate and he delivered by winning the battle with his debate performance. However it still remains unclear until Tuesday night of who will benefit most from this brawl.

Border Agent: 'We might as well abolish our immigration laws altogether'