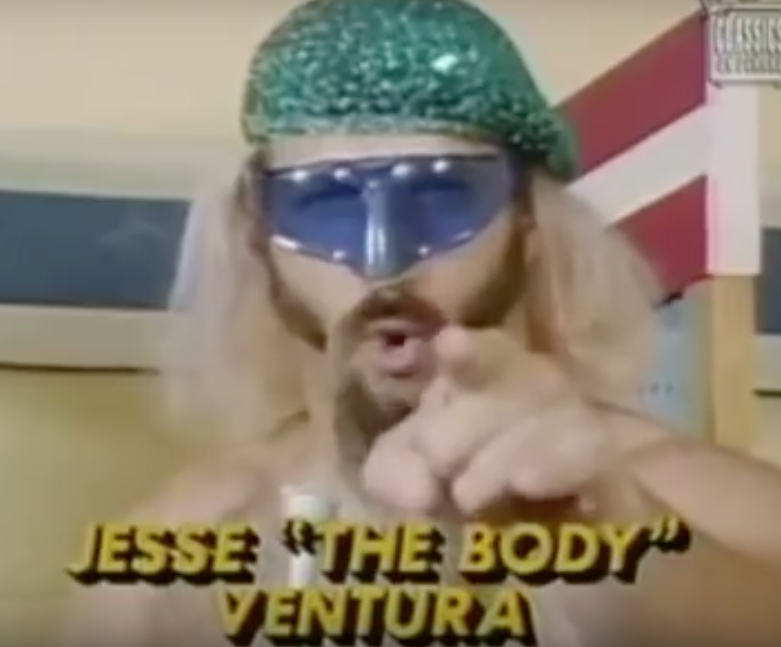 In 1998, we Minnesotan’s found ourselves in quite a strange gubernatorial race. One of the candidates was a former TV celebrity (and bit part actor) named Jesse “The Body” Ventura.

Ol’ Jesse had been an “All-Star wrestler”; an athletic type man quite comfortable chewing tobacco while wearing an early version of Spanx. He settled in the Twin Cities as a radio talk show host, which grew him a local fan base. He coached high school football and became a mayor of a Minneapolis suburb. Jesse brought with him fantastic Hollywood stories, loads of funny zingers, intolerance toward the establishment and a substantially hot wife.

And suddenly in 1998, we woke up to discover he was running for governor.

I remember we Conservatives didn’t treat him very well early on. We mocked him because of his bombastic nature, ridiculed his seemingly lack of common sense, and were “shocked” by his disrespect toward ‘the established political process’.

But his populist approach just made him more desirable to his ‘crazy followers’. And with that, our language got even worse. We ridiculed anyone that was ‘stupid enough’ to volunteer for him. We looked with disdain upon his supporters at the high school football games, blew them off at PTA meetings and generally made certain we showed our ‘superiority’.

Truth is, we were just arrogant and rude “know-it-alls” that were generally not very fun people to be around. Had there been Facebook and Twitter back then, our conduct would have earned us titles like ‘trolls’ and ‘cyberpricks’.

But here’s the catch: What we didn’t know, was that they were listening. Yep, those supporters were watching us and listening to everything we said. And they were everywhere.

And you know what they did? They taught us a lesson.

That’s right: In January of 1999, Jesse “The Body” Ventura became the first elected Governor to once have a 90 lb. woman and a boa constrictor wrapped around his neck…At the same time.

Today, we are in the middle of another unique race. But the stakes are much higher, and the characters have changed.

Sadly, the lunacy and repulsive conduct has not.

On the left, we have a liar running against a socialist cue ball. These two candidates represent a following of brain dead voters that spend more time on their Halloween zombie costumes than looking for a job.

But we accept this.

Why? Because they’re liberals. We have come to have no useful expectations of them.

On the Right, however, we have an interesting mess. A world filled with too many animals of different shapes, colors and styles. And leading that zoo is Donald Trump. He has a roar that can be heard around the world, a forest bigger than everyone else, and a tongue of quips that has turned Jeb Bush into a cry baby.

The man has talent.

But I have news for you: Donald is not a magician. He is no more capable of vanishing 20 million illegals, than Rand Paul is of dissolving the Federal Reserve, Cruz is of rebuilding the military in a weekend, Sanders is of keeping his paws in his own pockets, or Hillary is of telling the truth.

So I must ask of you one thing: Stop speaking to the rest of us like we just discovered politics. We gave up our tricycles a long time ago. We are not children: We’ve been at this a while, too.

We GET that Donald is your guy. That’s fine! But he’s no more likely of being Ronald Reagan than OUR candidate is. And stop talking to us like we’re idiots. Stop trolling our pages, sending us nasty inbox message, and reporting our little moments of happiness to Facebook just because our guy gave a good speech and YOU want it marked as spam.

We ALL need to beat the Liar and the Socialist. It’s going to take every one of our votes. It’s time to think about November, and the great responsibility in ensuring that the next president is not a liberal-

That gets to restock the Supreme Court.

So stop pissing us off and chasing potential voters away.