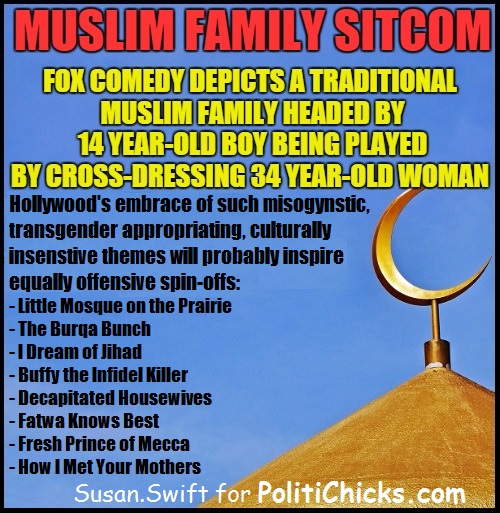 Kowtowing to President Obama’s demands for more television shows featuring Muslims in a flattering light, FOX has ordered a pilot for a new Muslim sitcom called “Chad, An American Boy.” The comedy features a young teenage boy from a Middle Eastern Family who must be the Muslim man of house.

Here’s the not-so-funny part: FOX has cast “SNL” alum Nasim Pedrad as the 14-year-old boy in this Muslim family.  For those who may not know, Pedrad is a 34 year old woman. Not only is an actress playing a 14 year old.  She’s playing a boy.  Because she’s also the co-writer.

So FOX thinks it’s a great idea to promote a series in which a middle-aged woman cross-dresses as an adolescent Muslim boy. Transgender appropriation collides headlong into cultural insensitivity in a subtext of misogyny.  And this sitcom will appeal to what sort of audience exactly?

And worse, Hollywood brutally mocks trans-genders by scripting a sitcom showcasing a DL cross-dresser in a culture that criminalizes LGBT.  Hilarious, NOT.  With all this going for it, all that this show needs to win the cultural insensitivity award is an episode on female genital mutilation and a suicide bombing.

Perhaps FOX needs to re-think its approach here.  If its goal is crass appropriation and insensitivity, Fox should consider such offensive TV show ideas as these:

1. “Little Mosque on the Prairie”.  A Muslim refugee family is settled by President Obama on a Midwest farm thanks to a generous grant from the American taxpayer.

2. “The Burqa Bunch”.  Two Muslim families, each having lost a parent to Obama drone attacks, meet, marry, and seek to integrate into their new suburban neighborhood.

3. “Fatwah Knows Best”.  Through ritual beatings and honor killings, a paternalistic father teaches his children the truth path of Sharia.

4. “I Dream of Jihad”.  The crazy antics of a buxom young sex slave who wields magical powers over her Muslim masters.

6. “Buffy the Infidel Slayer”.  A Burqua’d Buffy goes to madrassa by day and slays infidel heretics by night.

8. “How I Met your Mothers”.  Young Imam recounts his zany upbringing by dad’s six wives.

9. “Decapitated Housewives”.  When suburban Muslim brides explore forbidden topics such as education or driving, they learn the severe price of disobedience and apostasy, one by one.

10. “72”.  Set in 72 hours of real time, veteran suicide bomber Jihad Bauer struggles against international spy agencies as he seeks to locate and destroy a target worthy of earning his 72 virgins.

11. “Last of the Mohammedans”.  Hawkeye leads his fellow Avengers in the extinction of ISIS.

How the Animal Kingdom Exposes Leftist Utopia as a Sham

Conservatives in South Carolina Are Ready for Victory