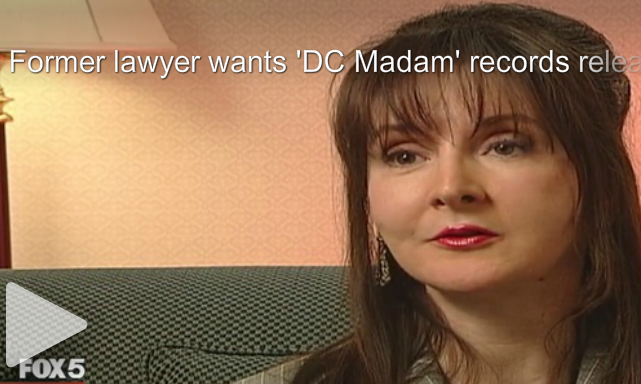 In 2007, DC was rocked with a sex scandal of epic proportions when Deborah Jeane Palfrey, known as the ‘DC Madam’, was arrested.  Among other charges, Palfry was convicted of federal racketeering stemming from the prostitution business she ran in Washington for some of the highest echelon players in Washington, D.C.  (A month after her conviction, Palfrey committed suicide in 2008.)

This week Montgomery Blair Sibley, Palfreys’ former lawyer wants to disclose the ‘black book’ listing her clients because he says it could be “relevant to the 2016 presidential race.”

It should be noted that after the DC case, Sibley was disbarred.  He ran for president in 2012 as a write-in candidate, questioning Barack Obama’s birth and more recently he has been questioning the eligibility of Senators Rubio and Cruz.

As for his allegations, as long as none of the presidential candidates have major skeletons in their closets, all’s well with the world.

Sibley says those records “may contain information relevant to the upcoming presidential election.” However, the filing does not say what those names are or how they are connected to the 2016 election.

FOX 5 conducted a series of interviews with Palfrey during the scandal. She never denied the nature of her business, but claimed she was unfairly prosecuted and convicted.

We spoke with Sibley and he says despite filing his motion through the District Court, it has failed to even appear on the docket and they have essentially ignored this filing for more than three weeks.

Sibley says his goal is to get the truth out over what exactly was in Palfrey’s prostitution records once and for all.