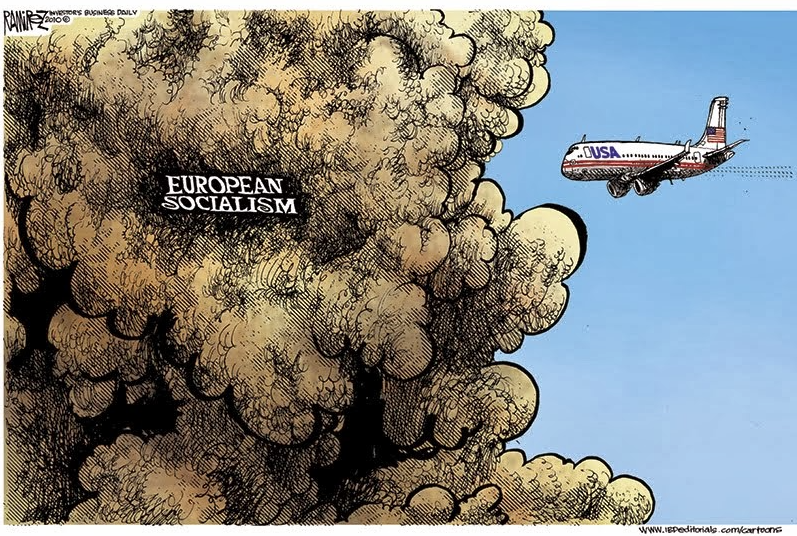 When did we start looking up to Europe as an example of how we should govern and what our state and federal organization should be? How little do those that cite the examples of Denmark and Sweden know about those countries.  Both are monarchies and both are governed from Brussels. Corporate income tax in Denmark is 23%, Sweden 22%; personal income tax 30-47% and 59% maximum respectively – which is a far cry from Sanders’ 90% tax. How much would you take home from a $15/hour wage under Sanders’ administration…?

Those who denounce and decry ideology the most are those who are most likely to espouse it. During the 2009 elections, Sen. Obama was asked if he would still raise taxes on “the rich” even if he knew (not thought or surmised, but if it were a proven fact) that such a raise would hurt our economy. “I’d consider it,” he said. That is ideological blindness.

Now we have socialist Bernie Sanders preaching to us about “morality.” In the New Left PC-mindset of this socialist ideologue moral means to be revengeful. “We must raise taxes on the rich,” he says, not because it will help the economy but because it is the moral and right thing to do. Each new “social Democrat” who moves further left becomes a “Democratic Socialist,” until he or she drops the word “Democratic” altogether.

Thus, Denmark and Sweden are not the ends he aspires to become but instead are the means–mere stepping stones for his ideology. And he does not want to stop with Denmark and Sweden – he wants the Soviet Union of the 1970’s and 1980’s. Collectivization, five-year plans and the rule of the Party Dictate – those are his ultimate ends. Denmark and Sweden? Sanders probably just looked them up on Wikipedia as the states with the highest tax rates. Why not Poland, Slovakia,  or Czech Republic (where, by the way, maximum personal tax rate is 30% but it can also be zero, and maximum corporate tax is 15%)? Because those post-communist countries treasure liberty too much.  They knew communism firsthand and tend to shy away from all big government and the bureaucratic dictate of Brussels.

There is another point no one seems to notice regarding the European Union (EU). Historically, EU has been composed of nations that have arisen from a multicultural multinational environment (former Austria-Hungary) and nations that were created at the point when, after the Peace of Westphalia in 1648, state borders were established to correspond with nationalities. Thus, the modern western European concept of state-nationhood was not the same as that of central and eastern Europe, where it was commonly understood that the Empire was composed of diverse nationalities. In the nineteenth century Vienna, it would have been just as common to hear German, Czech, Hungarian, Slovak, or Italian.

In France, England, and post-Bismarck Germany, the concept of a “nation” was identical with that of a state, thus establishing a clearly defined notion of a citizen: I am a citizen of France because I speak French and live in (the territory called) France. On the other hand, in the amalgam of Austria-Hungary, this would have been impossible, because everyone felt their own “belonging” to the local community first. This community spoke a local language and was hell-bent on preserving their cultural customs. From this small-state nationalism, “Balkanization” was born – a process of disintegration of a nation into states. Why? Because the nation never existed as a unified entity in the first place.

Consider Yugoslavia, for instance, which had been held together by Tito under his very peculiar communist dictatorship. Stalin knew he could not have done any better there, because Croatia, Serbia, Slovenia, Kosovo, and Montenegro have always been distinct communities – with peculiar diverse religious habits, often different in speech and even the alphabet! The situation in pre-war Yugoslavia was not unlike that of pre-war Iraq. The results were not the same only because European nations are civilized and their small communities are not religious tribal societies. In other words, where there is a separation between the state and the religion, the new “nation-state” can be integrated into a community of nations.

However, the proverbial American “melting pot” has never worked out for the nation-states of former Habsburg Empire. These are what Masaryk called “small nations” with their predilections and apprehensions. They are very particular about their folk customs and habits, fairy tales, religion and symbols. Language, blood and soil – such are their roots, which no power on earth can uproot. Communism tried, but failed. Capitalism only injected more pride and healthy self-esteem into these small frightful entities. This self-esteem, however, is underscored by feelings of strong nationalistic and ethnic identity. Such feelings lead to grandiose gestures and overestimation of one’s abilities. They look up to the United States, trying to imitate us, while at the same time begrudging our greatness and backbiting about our “world policing patriotism.”

The European “salad-bowl” system of diverse but locally coherent and unified communities is not something we treasure here in the United States. Instinctively, we know that we were molded and forged into One though the brimstone and fire of many a battle, through suffering and abnegation, war and death… and should we be dissected and severed again like Ben Franklin’s proverbial snake, we would perish as One Nation under God, torn apart for the sake of the communist ideology of diversity.

Communism has one end – totalitarian rule of one Party. Everybody must think the same, be the same, shut up and toe the line. Excuse my language, but we must call a spade a spade before it hits us on the head.

Meanwhile, we suffer in silence the less obvious totality of language – political correctness, which forces us to accept the unacceptable – which is the totality of thought. Why would anyone blame someone for saying that President Obama is a Muslim or a pussy? Much worse has been said about our former presidents. To be direct, perhaps blunt, is not the same as being rude. If it quacks like a duck…

We are accused of being narrow-minded, even racist when we defy “diversity.” Our accusers are giving us Europe as an examples. They are looking up to Europe through the rosy-colored glasses of Wilsonian World Order – as a monolith, an example we should follow. But what is diversity?

Diversity is the sharp bodkin pointed at our hearts – the point of the spear of the totality of political correctness. Diversity is a means to an end. Diversity is the opposite of cultural assimilation and social integration. The latter terms are used as pejoratives per se by the modern Left. Why? Because they represent the United States of America.

DNC chair Debbie Wasserman-Schultz recently stated that Democrats are “proud Americans.” But how can they be when they are trying to undermine the core of American democracy and install every single instrument of socialism (from One Payer System to free education, housing, social subsidies for everyone)?  Even their “open borders” policy is communist because they want to keep people in, literally incentivizing them not to leave once they come–in order to vote for The Party and worship The Regime! If our socialist “democrats” ever decide to close the border, it will be to prevent people from moving out. Trust me, I have been there before.

I am sick and tired of hearing American socialists talk abut what Europe has that we do not. Especially looking up to Europe is painful, considering it is currently a disaster in the making. EU is 30 years old and constantly falling apart: a referendum is Spain, Scotland, and now England, and no one wants to be subject to Brussels’ dictate. Ironically, they have been trying to emulate us!  A question to ponder:  Are the kingdoms of Sweden and Denmark so attractive to Sanders and his followers because they are kingdoms?  Is that really the direction they want the U.S. to go?

New Video "It Feels Good To Be a Clinton" Will Make Hillary MAD.