American women have been involved in the U.S. Military in different capacities since the Revolutionary war, so the idea of women in combat situations has been around for a long time.  Yet just 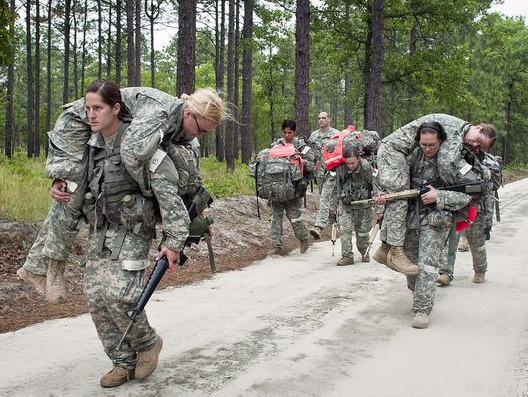 because women may be capable, does that mean they belong there?  War is not about fairness or equality and our military was never designed to be a social experiment.

This debate has been going on heavily for the past few years since the Obama Administration reversed rules on women serving in full combat roles and instructed Military branches such as the Marine Corps to gender-integrate its combat arms specialties.

The Military were to have completed the integration program as of last month.  Last year however, the Marine Corps completed research to see if women could finish its Infantry Officer Course (IOC). An IOC diploma is required to earn the designation of a military officer.

Out of 29 women who tried the course, none passed; and only four made it through the first day’s combat endurance test.  Also last year, surveys were conducted by U.S. Special Operations Command (SOCOM).  About 7,200 SOCOM jobs have been opened up to women, yet survey results showed that  among both men and women, “They’re concerned that this might result in the lowering of the standards in what are currently our male-only occupations, and that would then reflect on either them or on the women who come into those occupations.”

At the time of the article, SOCOM Gen. Joseph Votel, assured, “We will continue in our commitment to provide the best manned, trained, and equipped special operations personnel to execute our nation’s most difficult and sensitive missions… With that in mind, we can assure you that our high standards will not be lowered.”

A report in December by CBN NEWS noted that in a survey conducted by the Rand Corporation, more than 7,000 members of America’s Special Operations Forces unanimously objected to having women do their jobs.  According to the report, they say “allowing women to serve as Navy SEALs, Army Delta or other commando units could hurt their effectiveness and lower the standards.” Lack of physical strength and mental toughness were the main reasons given.

Last month, 45 year Marine commander of U.S. Southern Command, General John Kelly said that his greatest fear is the easing of the military’s stringent training standards as a result of the Gender Integration policies.

This past December Defense Secretary Ash Carter claimed that standards would not be altered to accommodate more female soldiers in combat positions. Maj. General Kelly said however that the “disparity between men and women in combat roles would likely not satisfy outside pressure groups, which will continue to press the military to achieve more equality of the sexes by diminishing standards.”  He added, “If we don’t change standards, it will be very, very difficult to have any numbers—any real numbers come into the infantry, or the Rangers or the SEALs, but that’s their business.”

Since Secretary Carter lifted all gender-based restrictions on combat and infantry roles, a whole other can of worms has been opened once again as well. As more women are fighting in combat roles, and others fighting to gain places to train in Special Forces units, the question of whether women should be open to the draft has been brought back to the conversation.

Army Chief of Staff Gen. Mark Milley and Marine Corps Commandant Gen. Robert Neller both support the idea of women registering for the draft as they are given chances in more combat roles among all branches.

In the past, women have been exempt from the Selective Service system, mainly because of limited roles in combat and inclusion in other specialized military units such as in the Special Forces.

Recently Navy Secretary Ray Mabus Jr. called for “a national debate” on the issue.  Army Chief of Staff General Milley said all eligible men and women should be required to register and USMC Commandant General Neller remarked that “It’s my personal view in light of integration that every American physically qualified should register for the draft.”

Some people argued back in 2013 that lifting the ban on women in combat might legally force Congress to either include women in the draft or finally do away with it for good. Some activists opposed lifting the ban specifically because it could affect all women aged 18-25, who would be forced to sign up for Selective Services just as young men have always had to do.

Feminists have been divided on the draft issue, even while most believe that women are physically able to serve in any military capacity.

Historically, the US has only seriously considered drafting women once during a military-nurse shortage in World War Two, but a group of activists opposed women’s inclusion in the draft because they believed it would roll back the rights won by the suffrage movement.

Then President Jimmy Carter requested that Congress reinstate the draft in 1980 while also recommending Presidents being allowed to evaluate the military’s needs upon possible future drafts and making a decision whether to, or how to include women in the draft. Selective Service registration was restored by Congress but did not add any provisions for the inclusion of women, only because at the time the Department of Defense didn’t allow women to serve in combat roles.

A year later a Supreme Court decision denied claims of a group of men who sued by claiming their 5th Amendment rights of due process were violated by the exclusion of women from the draft by a vote of 6-3.

In Rostker v. Goldberg, William Rehnquist, the Chief Justice wrote the majority opinion saying, “The existence of the combat restrictions clearly indicates the basis for Congress’ decision to exempt women from registration… The purpose of registration was to prepare for a draft of combat troops. Since women are excluded from combat, Congress concluded that they would not be needed in the event of a draft, and therefore decided not to register them.”

Justice Thurgood Marshall dissented, writing that the draft’s gender-based exclusion “places its imprimatur on one of the most potent remaining public expressions of ‘ancient canards about the proper role of women.’ ”

While the draft board has changed policies since the Vietnam War where many wealthier men found loopholes such as educational deferments to get out of service, going to school isn’t an automatic out anymore when it comes to the Selective Service. Now that the ban is lifted, cases such as Rostker v. Goldberg will not keep women out of conscription should a draft ever be instituted again.

According to a recent article by the Family Research Council, (Ret.) Lt. Gen. Jerry Boykin made the same point- that when the Defense Department removed the barriers to women serving in all positions, it also removed most barriers to drafting them.

The article mentions another issue brought up by Marine Commandant, General Neller at the Senate hearing, “our hope is that everyone will be successful. But hope is not a course of action on the battlefield.”

At recent Senate hearings, the Army noted that more than 9,000 women have earned the Combat Action Badge for actions in the Iraq and Afghanistan wars and more than 1,000 women have been killed or wounded during the wars.

Women may be capable of combat roles, many women have had the support of fellow Marines and Soldiers when it comes to training, but studies are still out on whether the standards have been lowered, or whether they can handle a full deployment even if they pass the rigorous training.

Women, whether we like it or not are built differently than men, and even if those who pass the tests as well as or better than men, they could face much more serious injuries from the physical strain and combat violence during full deployment.  This isn’t even taking higher rates of PTSD and the staggering suicide rate among female veterans into account.

I have the utmost respect for men and women who have and still serve in our military.  I know a few incredible women Veterans and I don’t doubt theirs or any other women’s abilities in their service, but there is a fine line between serving your country for love of country, and serving to break a glass ceiling.

There are just some places women don’t belong, and some places men don’t belong- but in our ever gender bending society, all barriers are erased.  It’s interesting that for all of the inroads made by feminists, they never care about the obligations which should (if things were truly equal) be imposed on them.

They want Equality NOW!  There are consequences when civilians direct the policies and programs in our Military. Will those who pushed for forced integration in our Military accept the consequences if it includes their sisters, daughters or granddaughters being drafted into wars in which terrorists don’t obey rules of conventions or engagement?

Milo Yiannopoulos: Twitter Will Try To Sway The Presidential Election