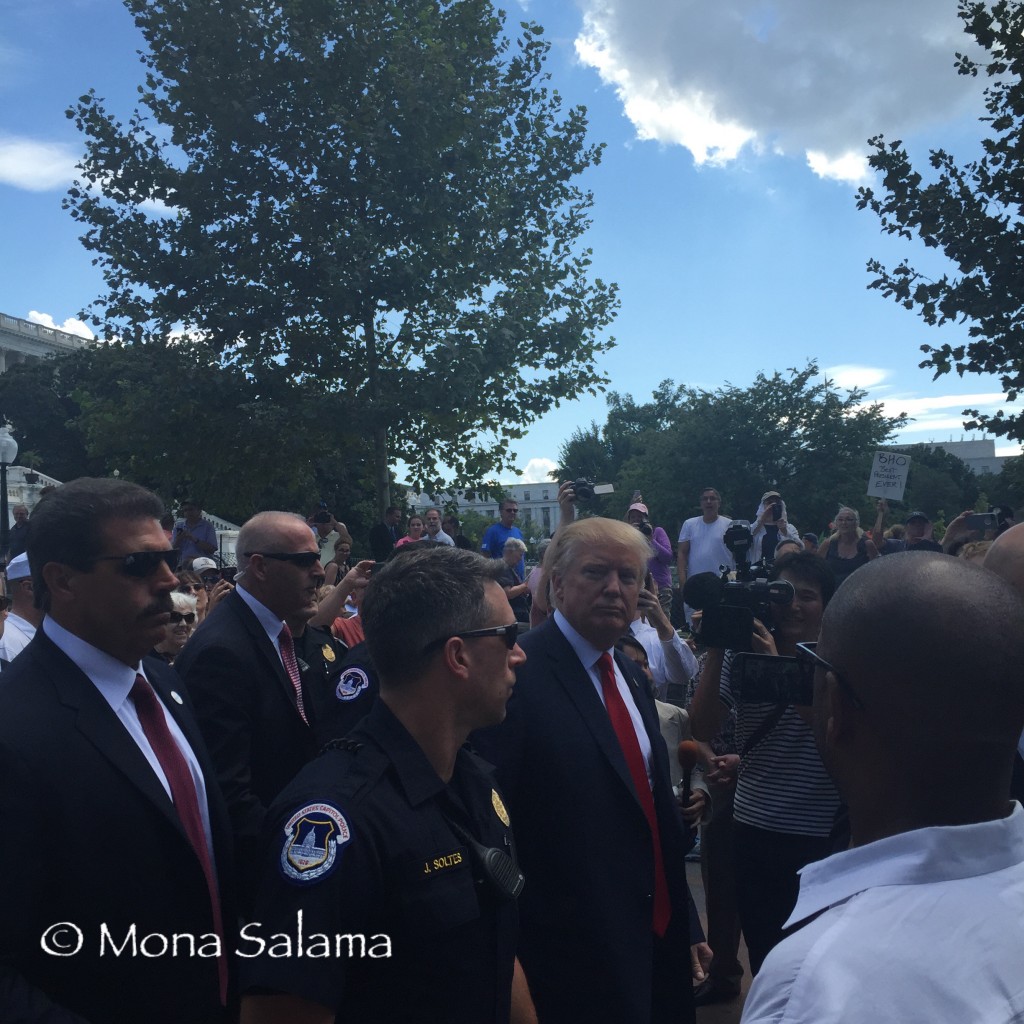 Coming from a second place finish in the Iowa caucus, real estate mogul Donald Trump is switching his campaign style tactics from just holding one huge rally a day to now holding a more traditional retail style of campaign consisting of town halls and meet and greets as he looks to win the New Hampshire primary next Tuesday.

Returning to the Granite state on Thursday, Trump schedule was jammed packed. He began his day with a town hall to then meet with small business owners in Exeter for a meet and greet. From there, Trump went to the Manchester, stopping by the campaign headquarters to thank the volunteers to then visit the Manchester police officers at their station during their roll call. After that, Trump participated in an organized CNN town hall to then end his day at another rally at Portsmouth.

Held at the historic Exeter Town Hall building, Trump began by addressing the crowd with his usual talking points, slamming Washington politicians for making poor deals on trade along with the economy, illegal immigration and foreign relations. “I was going to say they are full of shit,” Trump said in regards to politicians. “But I won’t say that, it’s too controversial, and of course it’s not politically correct.”

Trump ended his 20-minute address reminding supporters it’s now “crunch time” with the whole nation paying attention to the New Hampshire primary on Tuesday. “It’s winnowing down rapidly,” he said, adding the crowded GOP field is half gone and more causalities after the New Hampshire would follow suit.

Prior to Trump taking the stage, fire marshals shut the doors on the long line of supporters waiting to see the front-runner in person. The marshals would do the same to members of the media, citing the small venue was filled beyond capacity. Taking questions from the audience who were capable of making it inside the venue, Trump would randomly choose individuals from the crowd, where they asked the front-runner a numerous range of issues such as illegal immigration, social security to veterans and his plans as president. New Hampshire state representative Al Baldasaro was the Mic person where Trump singled him out as the “king of vets” as Al was crisscrossing the venue to the person Trump picked randomly.”

“Al, you are the greatest,” Trump said, shouting out the former marine who endorsed Trump for president early in the summer. “Al? Do the vets like Trump?”

The first question would become an intense situation between the questioner and Trump. The young woman asked about the important role that undocumented immigrants play in taking jobs Americans don’t want to do. “Who told you to be here? Bernie?” Trump said. From there, another student shouted that illegal immigrants are the backbone of the country.

When asked about how he would work with an obstructionist Congress, Trump responded that he has dealt with politicians his whole life and his experience working in real estate are more difficult to deal with than Congress. “I have dealt with politicians all my life,” Trump said. “Getting [zoning in New York City] approved is harder than 95% of the things I have to get approved of Congress.”

After the rally, Trump would leave in the front entrance instead of the back to shake hands with the crowd who were rejected to enter. While shaking hands and taking pictures, protestors followed his every move, shouting “Dump Trump” and “Trump is a racist.” His supporters countered the protestors rants by chanting over them saying “Trump, Trump, Trump.” He then met with the reporters who stood around to take a few questions. Most of the questions centered on the anger of not being able to get inside the venue to cover it. “Could we have had a larger venue?” Trump responded. “There was something nice about it. It was historic, there was a good vibe.”

Latest poll in New Hampshire released by CNN/WMUR on Thursday shows Trump leading with 29% followed by Marco Rubio at 18%. Cruz is in third place with 13% following by John Kasich at 11%.

Why Such Animosity Between Supporters of the Presidential Candidates?