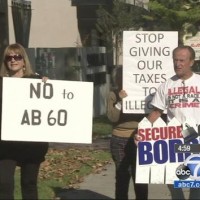 There are certain privileges available to the people of the United States of America, enjoyed by those willing to be honest, productive members of society. These are not rights, which are given to us by God (not our government) and cannot be taken away. Think of them as the perks of being a good American. They include access to various social programs, use of public infrastructure, and critically, the license to drive a car. Unlike rights (which, again, are not to be infringed), the government can and should restrict or remove privileges from those who prove themselves untrustworthy, such as criminals who have broken the law. And, most certainly, it should prevent people whose very presence in the nation is a crime from ever having access to privileges at all.

But in the great state of California, this simple bit of common sense is not practiced. Regrettably, California has long adhered to a tradition of being a “sanctuary state” for illegal immigrants – that is, a state that not only tolerates people, who have entered the country illegally, but actively assists them in hiding from authorities and even officially impedes the work of immigration agencies that might seek to deport them. One example of this systemic behavior was the passing of California bill AB 60, which made it possible for illegal immigrants to obtain a California driver’s license. And, lest their formal application for such licenses bring them to the attention of immigration enforcement, the bill helpfully provides for their protection by barring police from drawing obvious conclusions based on someone’s possession of an AB 60 document. The American Civil Liberties Union even put together a thoughtful warning for illegal’s considering putting in the application, suggesting that they might still want to hold off if they had committed any crimes (besides, you know, just being here) such as engaging in gang activities, domestic violence, or returning to the country after having been previously deported. It’s good to know the ACLU has got the backs of honest, law-abiding Americans.

So now we have data that in 2015, about 50% (605,000) of all new drivers’ licenses issued were given out to illegal aliens as part of the AB 60 program, which is expected to cost $141 million taxpayer dollars over the course of three years. It positively beggars the imagination, but California is forcing legitimate, taxpaying American citizens to pay for illegal immigrants to enjoy privileges and protections that should only be available to people who aren’t criminals.

Most Californians are genuinely good people. The majority of them probably don’t even realize these things are being done to them, by a corrupt government with some bizarre ideological attachment to empowering criminals. That’s why it’s important that people know about the Davis-Oliver and Kate’s Law, Protecting Americans Initiative, which is an initiated state statute set to appear on the ballot in November of this year. The statute removes hobbles from law enforcement by authorizing them to work on immigration cases (since the federal authorities refuse to do their job) and prohibits laws that shield illegal’s from police. It bans the kind of outrageous “sanctuary” legislation that is so common in California, and restores the rule of law. It’s an important and good statute, and it should be supported by good people.

It is simply unacceptable that illegal immigrants are protected from law enforcement for breaking for the law. It’s an assault on the rights of all legitimate American citizens that their tax dollars are being used to actually empower people whose very presence is an insult to the laws of this land. That’s the kind of outrage that is addressed by Kate’s Law, and that’s why it needs support.