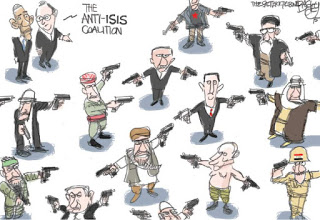 The most common attack on proposals to end Muslim migration to the United States is that this policy would somehow interfere with the coalition to fight ISIS.

Lindsey Graham asked, “How do you go to any of these countries and build a coalition when your policy is simply because you’re a Muslim you can’t come to America?” “This policy is a policy that makes it impossible to build the coalition necessary to take out ISIS,” Jeb Bush objected.

The White House agreed, “We have an over-60-country coalition fighting with a substantial number of Muslim-majority fighters who are absolutely essential to succeeding in that effort.”

But there are two things wrong with this argument.

First, no Muslim country or faction is fighting ISIS because they like us. They’re not doing us any favors. They’re protecting themselves from the Islamic State.

The insistence of ISIS that it is the supreme authority over all Muslims has even led it into battles with Al Qaeda and the Taliban. No one fighting ISIS is doing it because of our immigration policy. Jeb Bush referenced the Kurds. The Kurds want their own homeland. Those who want to come to America don’t want to fight ISIS. Those who want to fight ISIS aren’t looking to move to Dearborn or Jersey City.

Second, Muslim countries in the anti-ISIS coalition have much harsher immigration policies for Christians than anything that Donald Trump or Ted Cruz have proposed for Muslims.

When Obama gave his speech, the first Muslim country he mentioned in the coalition was Saudi Arabia. Saudi Arabia bans all religions except Islam. No churches are allowed in Saudi Arabia. Christmas parties are targeted with police raids. Converting to Christianity is punishable by death. Non-Muslims are entirely banned from some Saudi cities and the legal system discriminates against them.

Saudi Arabia also engages in blatant racial discrimination and denies basic civil rights to women. And yet there are no problems with having Saudi Arabia in the anti-ISIS coalition. Certainly the Saudis don’t worry that we’ll drop out of the coalition because they ban Christianity.

Other Muslim anti-ISIS coalition members include Turkey, whose leader threatened to ethnically cleanse Armenians, Egypt, where discrimination against Christians has led to government persecution, the UAE and Qatar, where churches are not allowed to display crosses, and Somalia, which banned Christmas.

Saudi Arabia’s Islamic justice system is often indistinguishable from ISIS. Turkey and Qatar’s governments have ties to Al Qaeda. Both also have alleged ties to ISIS.

And they are the core of Obama’s Muslim anti-ISIS coalition members.

Why exactly does the United States have to worry about meeting their standards for accommodating Muslims, when they have no interest in meeting our standards for the treatment of Christians?

Muslim coalition countries routinely block citizenship for non-Muslims, some forbid marriages to non-Muslims, yet we’re expected to provide citizenship to hundreds of thousands of Muslims, many of whom support ISIS, Al Qaeda or the Muslim Brotherhood, just to maintain this coalition?

What use is an anti-ISIS coalition that not only forbids us to protect our own national security interests, but actually demands that we undermine them to accommodate some larger Islamic agenda?

The majority of the Muslim anti-ISIS coalition hates us. Some members actually sponsor terrorism against us. We will not alienate them with a migration ban because they are not our friends.

The Muslim countries in the coalition against ISIS are absolutely unashamed of putting their own religious and national identities first. Yet Bush, Graham and the White House would have us believe that we will destroy any coalition with them against ISIS if we put ourselves first for once.

We need to stop worrying about offending Muslim countries that deny Christians and Jews basic human rights and start looking out for our interests, our own security and our own welfare.

Not only won’t this weaken the coalition against ISIS, it will make it stronger. Countries can be united by shared values or shared interests. No matter how much presidents from both parties may pretend, we have no values in common with Saudi Arabia. We are not united with it or the rest of the Muslim members of the coalition by shared religious or cultural values. We are occasionally united with them by shared interests. It’s time that we were honest about that with them and ourselves.

Saudi Arabia is a brutal totalitarian monarchy that hates everything that we care about from our religion to our way of life. Picture anything from a 4th of July barbecue to Christmas and the Saudis will have banned everything from the beer to the pork chops to the men and women sitting together.

But we both hate ISIS and that’s all that we really need for a coalition against it.

If we are ever going to have an adult relationship with the Muslim world, it will be based on our interests, not values. It will work because both sides know exactly what they are getting out of it.

The Muslim world wants to know what to expect from us. It hates Obama because of his unreliability. To them, his political ideology resembles some species of mysticism which they do not share. It much prefers an arrangement based on mutual interests over our misguided mystical attempts to discover shared values by pretending that Islam is just Christianity misspelled.

It’s not an immigration ban that poses a threat to the coalition, it’s the insistence that shared values come before shared interests. If we are to have shared values with a Muslim coalition, that requires us to prosecute blasphemy against Islam, provide a special status to Muslims and a lower status to non-Muslims. Such an approach is incompatible with our own values, yet we have begun doing just that. Locking up filmmakers and condemning cartoonists has given us more in common with Saudi Arabia and ISIS. And it would be unfortunate if we had to become an Islamic state to fight the Islamic State.

We can best fight ISIS by being a free nation. There is no use in defeating ISIS just to become ISIS. That will not prevent us from joining coalitions of shared interests with anyone else, but it will stop us from trying to find shared values with Islamic tyrannies of the axe, burka and sword. A ban on Muslim migration will allow us to fight ISIS abroad instead of fighting ISIS and becoming ISIS at home.

#RealWarOnWomen: Sentenced to Stoning in the Islamic Republic