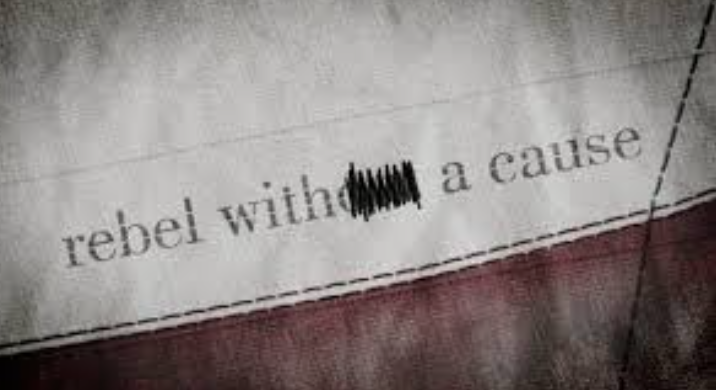 Leftist movements begin with rebellion and end with conformity. No Utopian movement can tolerate rebels for long because there is no room for dissent in paradise. An ideal society, the goal of leftist political movements, not only has no room for war, racism, greed and all the other evils the conformist paradises of the left hope to eliminate, it also has no room for disagreement.

The perfect society and its perfect ideology are also the perfect tyranny. Against this Utopian collectivism, which promises paradise and delivers a prison, is the traditionalist rebel who finds virtue in the acknowledgement of human flaws rather than in the unthinking pursuit of an unchanging perfection.

The traditionalist rebel is not seeking perfection, but humanity. He is a skeptical idealist who is interested in character rather than movements. He is above all else an individualist with an instinctive distrust of any movement that requires him to abandon his rights for the greater good.

The traditionalist rebel is the snake in the liberal Eden because he does not have faith in the noble motives of the bureaucratic activists who claim to be the gods of this Eden. He knows enough of human nature to reject the fallacy that the right ideology makes men so righteous that they can be trusted with absolute power without absolute corruption following in their wake. He knows that socialists have not risen above the crimes of selfish self interest that they condemn mankind for.

Their Utopian Eden is a false paradise built on lies and maintained by abuses. It is not the paradise where mankind can return to a state of innocence, but a hell whose innocence is only a willful ignorance of the crimes being committed in its name, whose followers maintain their false virtue through a steady diet of moral outrage over the crimes of everyone but their own superiors and their own ideology.

The traditionalist rebel values innocence, but has learned the lessons of experience. He knows that virtue is an individual struggle and that it cannot be achieved through self deceit. He has learned long ago that we do not become better people by lying to ourselves.

He has built his character by being honest with himself and he does not believe that any man is infallible enough to demand blind faith or that any movement which punishes even the mildest dissent is anything but the worst self of humankind wrapped in deceit and self deceit.

The traditionalist rebel does not believe that collectivist institutions can make us moral. He relies instead on individual institutions of character and honor, empathy and morality. He trusts people individually to do the right thing more than any government. And when he has to trust institutions, he prefers those that are built on honor and integrity, and on simple decency, than those tangled mazes of academic theory whose premises followed to their terrible conclusions assert that human beings are expendable for the sake of utopian ideologies.

It is his individualism that makes the traditionalist rebel so ornery. He has natural anti authoritarian instincts, he demands reasons for restrictions and has a tendency to defy for the sake of defiance. And yet he is not a destroyer, but a builder, he does not want to smash things for the sake of smashing, instead he smashes that which prevents him from building his own values and his own relationships.

Unlike his leftist rebel enemies, he does not fight to impose his system on others, but to defy their attempts to impose their system on him. That is why he is an authentic rebel and they are aristo tyrants playing at being rebels because even bad guys hate seeming like bad guys.

The traditionalist rebel is slow to anger. Unlike the social justice warrior and the crybully, he does not derive his sense of self from manufactured conflicts only meant to reinforce a collective identity, but from his own values. His anger is patient, but also more decisive. It is not the fanatical hysteria of the neurotic leftist who, like the Mohammedan suicide bomber sees paradise in the destruction of perceived enemies, but is a cold, hard determination to be free of them.

It is not the leftist Utopian who wants freedom, but the traditionalist rebel who sees his right to speak, to worship, to marry and raise children, to protect his family and his home, and to go through his life without being accountable to anyone but G-d and his conscience every minute of the day, instead of the ears, eyes and tentacles of government, under attack who truly fights for freedom.

The traditionalist rebel values structure that derives from his own values. He does not believe that mankind can be saved by an external police state, but by the awakening of the authentic voice of the internal conscience. Like America’s Founders, he believes that we should build institutions with faith in the Creator and skepticism toward man.

He knows that we cannot make paradise happen by being dishonest about human nature and pretending that the snake of our worst impulses is our god. And so he is naturally skeptical of any grandiose effort at global and national improvement over the improvement of the self that pretend that a better world can be built out of the same materials as the old through sheer collective organization.

The traditionalist rebel is not interested in a better world, but a better self which can be used cooperatively in the building of a better family, a better community and perhaps, a better future, not through top down regulation, but through daily interaction.

Systems are by definition inhuman. Utopian ideologies scale them higher and bigger, nationally and globally, making them ever more inhuman. The traditionalist rebel instinctively rebels against inhuman systems in favor of human connections, he rejects centralized authority for local authority, unelected officials for elected ones, national regulations for human values and mandates for conscience.

At every turn, the traditionalist rebel seeks to scale down issues to character while the leftist authoritarian seeks to scale them up to institutions. This is the conflict that will decide our future.

Will we be a human nation or a massive system? Will we continue to be a nation of individualist rebels or a collectivist nightmare of frightened, angry drones who are convinced that utopia is one more purge away.

A Special Place in Hell for Hillary's Voters

Mamas, Don’t Let Your Babies Grow Up To Be Socialists