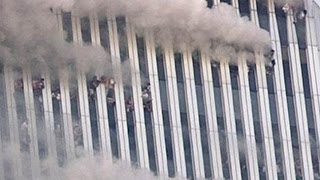 Men and women, some whose clothes were still marked with gray ash, walked dazedly toward Union Square. Many did not know what to do or where to go. So they kept on walking. They knew the country was under attack, but they did not know how bad it was or what might still be heading for them.

Behind them lay a changed city and thousands of American dead. Ahead was the bronze statue of George Washington, facing into the devastation and raising his hand to lead his men forward in victory. Around its base, with the destruction of the World Trade Center as their backdrop, leftists had set up shop, coloring anti-war posters even while rescue workers were risking their lives at Ground Zero.

In the coming days, the statue of Washington would be repeatedly vandalized by leftists drawing peace signs and “No War” and “War is Not the Answer” slogans on it. But that moment crystallized my realization that while Muslim terrorists had carried out the attack, it was the left we would have to fight.

While some New Yorkers had gone to help the victims of Islamic terrorists, the left had rushed to aid the terrorists. Unlike the rest of us, they were not shocked or horrified by the attack. They were treasonously working on ways to spin the murder of thousands of Americans to protect the enemy.

The greatest obstacle to defeating Islamic terrorism is still the left.

The left helped create Islamic terrorism; its immigration policies import terrorism while its civil rights arm obstructs efforts to prevent it and its anti-war rallies attack any effort to fight it. In America, in Europe and in Israel, and around the world, to get at Islamic terrorists, you have to go through the left.

When a Muslim terrorist comes to America, it’s the left that agitates to admit him. Before he kills, it’s the left that fights to protect him from the FBI. Afterward, leftists offer to be his lawyers. The left creates the crisis and then it fights against any effort to deal with it except through surrender and appeasement.

Islamic violence against non-Muslims predated the left. But it’s the left that made it our problem. Islamic terrorism in America or France exists because of Muslim immigration. And the left is obsessed with finding new ways to import more Muslims. Merkel is praised for opening up a Europe already under siege by Islamic terror, Sharia police, no-go zones and sex grooming and groping gangs, to millions.

The left feverishly demands that the whole world follow her lead. Bill Gates would like America to be just like Germany. Israel’s deranged Labor Party leader Herzog urged the Jewish State to open its doors.

And then, after the next round of stabbings, car burnings and terror attacks, they blame the West for not “integrating” the un-integratable millions who had no more interest in being integrated than their leftist patrons do in moving to Pakistan and praying to Allah on a threadbare rug. But “integration” is a euphemism for a raft of leftist agenda items from social services spending to punishing hate speech (though never that of the Imams crying for blood and death, but only of their native victims) to a foreign policy based on appeasement and surrender. Islamic terrorists kill and leftists profit from the carnage.

The ongoing threat of Islamic terrorism is a manufactured crisis that the left cultivates because that gives it power. In a world without 9/11, the Obama presidency would never have existed. Neither would the Arab Spring and the resulting migration and wholesale transformation of Western countries.

In the UK, Labour used Muslim immigration as a deliberate political program to “change the country.” In Israel, Labor struck an illegal deal with Arafat that put sizable portions of the country under the control of terrorists while forcing the Jewish State into a series of concessions to terrorists and the left. The same fundamental pattern of Labour and Labor and the whole left is behind the rise of Islamic terrorism.

Muslim terrorism creates pressure that the left uses to achieve policy goals. Even when it can’t win elections, Muslim terrorism allows the left to create a crisis and then to set an agenda.

Today’s Islamic terrorist is the product of traditional Islamic theology and Soviet tactics. The USSR did not intend to create Al Qaeda, but they provided training and doctrine to terrorists from the Muslim world. The “secular” and “progressive” terrorists of the left either grew Islamist, like Arafat, or their tactics were copied and expanded on, like the PFLP, by a new generation of Islamic terrorists.

The earlier phase of Islamic organizations, such as the Muslim Brotherhood, had been inspired by fascists who were seeking to use them in their own wars. Over this layer of secret societies plotting takeovers and building networks of front groups, the Soviet Union added the terror tactics that had been employed by the left. And the leftist mad bomber became the Muslim suicide bomber. Terrorism in the Muslim world has evolved from functioning as a Third World proxy army for the left, in much the same way as guerrillas and terrorists from Asia, Africa and Latin America had, to a diaspora whose migrations lend a domestic terror arm to a Western left whose own spiteful activists have grown unwilling to put their lives on the line and go beyond tweeting words to throwing bombs.

With the Muslim Brotherhood, the origin organization of Al Qaeda, ISIS and Hamas, among many others, so tightly integrated into the American and European left that it is often hard to see where one begins and the other ends, Islam has become the militant arm of the purportedly secular left. Western leftists and Islamists have formed the same poisonous relationship as Middle Eastern leftists and Islamists did leading to the rise of the Ayatollah Khomeini and the Arab Spring. Leftists expected Islamists to do the dirty work while they would take over. Instead the Islamists won and killed them.

On September 11, I saw with my own eyes how eager and willing leftists were to rush to the aid of Islamic terrorists even while their fellow Americans were dying. Nothing has changed. Every Islamic act of brutality is met with lies and spin, with mass distraction and deception by the treasonous left. Every effort to fight Islamic terrorists is sabotaged, undermined and protested by the enemy within.

Since September 11, the left has trashed the FBI’s counterterrorism and has now succeeded in destroying the NYPD’s counterrorism while transforming the FDNY into an affirmative action project. What the September 11 hijackers could never accomplish on their own, the leftists did for them by defeating the three forces that had stood against Islamic terrorists on that day. And it would not surprise me at all if some of the “No War” scribblers have gone on to play an influential role in that treason.

The left has crippled domestic and international counterterrorism. American soldiers are not allowed to shoot terrorists and the FBI and NYPD can’t monitor mosques or even be taught what to look for. Islamic terrorism has achieved unprecedented influence and power under Obama. ISIS has created the first functioning caliphate and Iran marches toward the first Jihadist nuclear bomb. The mass Muslim migration is beginning a process that will Islamize Europe far more rapidly than anyone expects.

The Jihad would not be a significant threat without the collaboration of the left. Without the left standing in the way, it’s a problem that could be solved in a matter of years. With the aid of the left, it threatens human civilization with a dark age that will erase our culture, our future and our freedom.

We cannot defeat Islam without defeating the left. That is the lesson I learned on September 11. It is a lesson that appears truer every single year as the left finds new ways to endanger us all.

To the Non-Voters Among Us

Why Such Animosity Between Supporters of the Presidential Candidates?