On January 20, 2017, President Bernie Sanders was sworn into office. The elderly Vermont politician, who had always made waves, refused to use a bible, instead taking his oath on a smudged copy of his own economic five-year plan. He also unilaterally modified the presidential oath from “preserve, protect and defend” to “enhance, enrich and humanize the Constitution of the United States”. 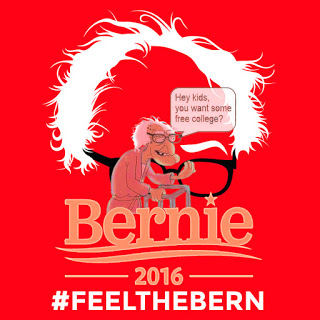 The unlikely candidacy of Bernie Sanders had shocked and divided a party and then a nation.

President Sanders won the Democratic Party nomination by going far to the left and then, defying conventional wisdom, he moved even further to the left in the general election. Unable to retain the minority portion of the Obama coalition, many of whose leaders had been allied with Hillary Clinton and were still bitter over her loss and did little to help him, his victory relied heavily on youth voter turnout.

Voter turnout in America had been falling since the sixties. But in 2016, it fell below the 50% mark for the first time in history. When Bernie Sanders won a three-way election, only 43% of a weary nation came out to vote. And barely a fifth of the country voted for the first Socialist president.

The Sanders campaign had eschewed a slogan; instead it listed all the things that would be given away for free. Free health care, free college, free homes, free phones, free internet, free cars and free money for everyone. In the last week of the campaign, President Sanders had unveiled a guaranteed minimum income that would be paid to every individual in this country making Welfare-for-All into a reality.

The disappointment did not take long to arrive.

Much of the financial sector that Bernie Sanders had hoped to tax began vanishing as soon as the election results were in. New York’s loss was London and Singapore’s gain. A trillion dollars in investment capital left the United States creating a ripple effect that brought businesses to their knees.

The prices of milk and beef doubled. Ersatz bread made out of starch filled shelves while people waited on lines for the privilege of receiving government-subsidized milk from local welfare offices.

On the day that Bernie Sanders was sworn into office, clutching his economic plan, the Dow fell 2,000 points. Negative interest rates generated fear, instead of growth. “The trouble with Socialism is that eventually you run out of other people’s money”, Thatcher had said. The money had not run out, instead it had fled to safer harbors for capitalism. The plan to finance Socialism using Wall Street was a failure even before Sanders squatted on a shaky chair in the Oval Office for his first official photo.

President Sanders was not going to be deterred by mere math. He turned to China, which despite its own chain of collapses, was still willing to subsidize another left-wing White House’s fanciful finances. His first proposed budget was $10 trillion, more than three times the amount of Federal revenues.

There were more downgrades of US debt by credit ratings organizations that were safely outside the country, unlike their American cousins which had learned from S&P’s example to paste on a smile.

While there was no joy on what was left of Wall Street, there wasn’t much to celebrate elsewhere.

The ubiquitous t-shirts emblazoned with the implausibly smiling face of “Bernie” that had been everywhere on campuses vanished as free college became a nightmare. Public colleges had to go free, but the money wasn’t there forcing them to slash and gut the quality of their educational offerings. 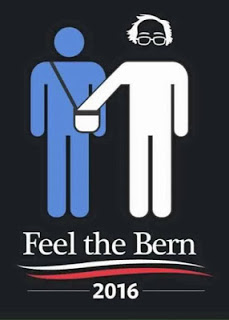 President Sanders announced that he stood with the rioting students and demanded the resignations of university boards and administrators he had no legal authority over. He got his way, but that only led to more chaos as radical insurgent boards eliminated science departments and sold off priceless manuscripts while taking out disastrous loans to finance unsustainable social justice programs.

In his first term in office, the prestigious public university had ceased to exist in the United States. Students flocked to overcrowded private institutions where tuition was now higher than ever.

Meanwhile his efforts to set up a parallel universal health care system were unraveling. Meant to bypass a hostile Congress, the system had yet to get off the ground outside Vermont and Rhode Island, where it had managed to burn through $100 billion before treating a single patient.

President Bernie Sanders retreated into conspiracy theories about “entrenched interests”. The IRS investigations and arrests of prominent Republican billionaires were hailed by the media, but did nothing to make any of his failed programs work. It only accelerated the departure of capital from the United States and drove domestic political instability to new heights.

Administration rhetoric grew disturbingly violent. The White House Chief of Staff claimed that the real terror threat was coming from secret organizations that had been set up to counter the president’s economic agenda. “Economic sabotage is worse than terrorism,” the New York Times opined. It proposed a system of expedited courts overseen by special judges for economic crimes.

The White House unveiled a special tip hotline and app to report acts of economic sabotage.

President Sanders raised even more eyebrows when he paraphrased Robespierre, saying, “The government of the revolution is the repression of material interests by any means necessary.”

His first State of the Union Address was a rambling mess as the 76-year-old president irritably avoided shaking hands, lost his place several times, grew hoarse, quoted obscure left-wing figures and made bombastic calls for a revolution. The Callowhill Massacre in Philadelphia, in which four ISIS supporters used bombs and shotguns to murder over a hundred people at a concert, was not mentioned at all.

President Sanders had ended the campaign against ISIS, but ISIS did not end its war on America.

Families of the victims had already been outraged when an irritated President Sanders told a reporter who asked him about it during a press conference for the rollout of his new tax proposal, “Look, these things just happen. Especially when the Moozlimbs get all worked up. We gotta be nicer to them.”

While President Sanders had no real agenda for the Middle East, some of his radical allies did. Sanders had called for ending military aid to Israel before the Yom Kippur War. His administration not only ended military aid to Israel, but to all of our allies. Sanders pulled out of NATO and banned defense contractors from selling weapons overseas. Military drones were repurposed to drop aid supplies on Afghanistan and Iraq. Some of these supplies did end up accidentally killing a number of terrorists.

But the administration quickly offered its sincerest apologies to the families of the dead terrorists.

As war broke out in the Middle East between Iran and its Sunni enemies, President Sanders instead attended the unveiling of a statue of Elmer T. Allison, editor of The Cleveland Socialist and founding member of the Communist Labor Party of America. He refused calls to return to the White House even as a barely functional Navy tried to evacuate American civilians who were trapped by the fighting.

But Bernie’s real problems were only beginning.

In the Senate, Sanders had been notoriously ineffective sponsoring only three bills that became law. Two of them renamed Vermont post offices. He proved no more able to work with Congress once he was in the White House. Instead, surrounded by radical allies busy transforming his ambitious agenda into law through a series of controversial executive orders, Sanders showed no interest in compromising even with members of his own party. And the feeling was more than mutual.

His first attempt to ram through universal health care saw Senate Democrats joining Republicans to override his veto. Most of his other proposals met the same fate. A Sanders proposal became known as a “fifteen percenter” because it was only supported by the 15% of the House in the Progressive Caucus.

Sanders had been the only member of the Caucus in the Senate leaving him with no support there. 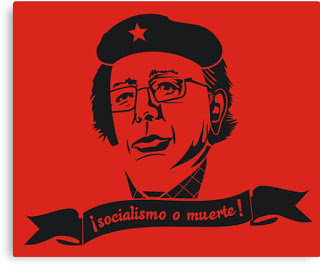 Despite two straight losses, Hillary Clinton had not abandoned her hopes for the White House. And she was not willing to wait until 2024. The Clinton machine’s strategy was to sabotage and undermine her enemy into retiring as a one-term president allowing her to run as the candidate who could actually fulfill his promises. And the Clinton machine held the allegiance of more Senate Democrats than Bernie.

Like Obama before him, President Sanders dealt with a congressional stalemate by forcing through his own agenda using radical allies in the bureaucracy and executive orders. But with entire states rejecting his decrees and approval ratings that were deep underwater, Sanders had reached a Constitutional breaking point in his first year in office. America was a nation divided as never before.

The Democratic Party was irrevocably splitting apart with growing talk that the Progressive Caucus and President Sanders would form their own party. And if that failed, their own nation.

In the State of the Union, President Bernie Sanders warned Americans, “This is not a government. This is not a country. This is a people’s revolution. And we will not allow anyone to undermine our revolution.”

"The Best Kind of Hate"