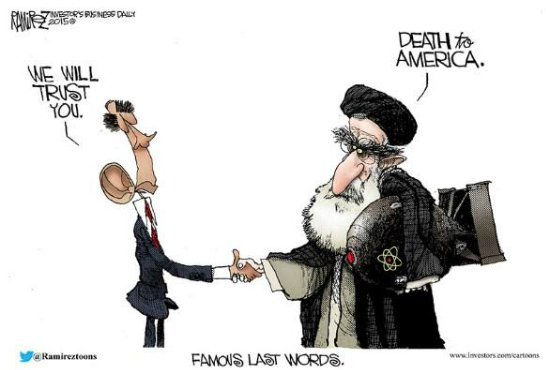 Obama and his political allies seek normalization with Iran. They are unconcerned with Iran’s nuclear weapons programs or its support for terrorism and they are willing to provide fig leaves for these and other threats by the Shiite terror state to the United States and to the rest of the free world.

Without normalization, Iran has few options for escalating its conflict with America. Islamic Revolutionary Guard Corps (IRGC) generals are fanatics, but they know that they cannot win a major military conflict with the United States. Instead, the IRGC terror hub seeks to carry out attacks that hurt the United States, but in ways that fall short of summoning up a full American military reprisal.

Under Obama, Iran has more options than ever because the United States is now willing to tolerate what it would not have tolerated in the past. But excessive escalation would still risk a scenario in which even a pro-Iranian administration would be left with no choice but to strike back at Iran. And Iran remembers the lessons of Operation Praying Mantis all too well. It has nothing to gain by losing billions in precious military equipment while the United States demonstrates its superior firepower.

Iran’s terror attacks have traditionally depended on a degree of plausible deniability. Shiite militias backed by the IRGC, from Hezbollah to the latest kidnappers of Americans in Baghdad, do the dirty work. Iran would supply IEDs to terrorists in Iraq and Afghanistan killing 500 Americans. It would provide a certain degree of training and aid to Al Qaeda, but without direct involvement in its attacks.

Iran would indirectly kill hundreds and even thousands of Americans, but with enough distance that it did not have to fear Americans bombers flying over Tehran. Under the same strategic logic, it may pass on nuclear materials to terrorists to use against the United States as long as it doesn’t fear retaliation.

Normalization, however, allows Iran to take its war against the United States to the next level.

A classic example of this, the bombing of the Jewish community center in Buenos Aires, an attack which everyone knows that Iran is responsible for, but which the local authorities were motivated to cover up because of their entanglement with Iran. Twenty years later, the cover-up led to the murder of a prosecutor who was investigating his own government’s complicity in covering up the attack.

This is what normalization accomplishes. Like the former Argentinean government, the Democrats have been compromised by their support for the Iran deal. The process began earlier when they decided to turn against the Iraq War and make outreach to the enemy into their foreign policy. Obama and other Senate Democrats refused to brand the IRGC a terrorist organization despite its role in the mass murder of American soldiers. Now they have to excuse the IRGC’s abuse of captured American sailors and any other attacks by the Shiite terror state to protect their act of collaboration in the dirty deal with Iran.

Normalization is more properly named collaboration. The collaborator is a traitor who has to excuse his treason by rationalizing the atrocities of the enemy. Iran’s Democratic Party collaborators have to explain how “nice” Iran is being by releasing American hostages. Like all collaborators, the traitors emphasize the benevolence of the enemy while overlooking the crime that benevolence is based on. They trumpet their success in getting special favors from the enemy as proof that collaboration works.

Kerry rushed to thank Iran for freeing the hostages without ever addressing the fact that taking the hostages was itself a crime. Instead of dealing with the original crime, the Democrats, like all traitors, rush to accuse opponents of being extremists who seek conflict over diplomacy. This was the same exact argument that Communist collaborators with Hitler during the era of the Soviet-Nazi pact directed at the West. It was the same argument that British anti-war activists aimed at domestic opponents of Hitler.

Democrats believe that they are engaged in a process of normalization with Iran. Senator Bernie Sanders called for Obama to “move as aggressively as we can to normalize relations with Iran”. But Iran is interested in normalization only as leverage for entangling the United States in further crises. So Iran might allow the reopening an embassy in Tehran, but only because it would give it more hostages.

While the left seeks to normalize relations with Iran, the Shiite terror state seeks to manufacture a steady stream of crises that interrupt normalization, but which it will be rewarded for resolving.

Sometimes this means literally taking hostages. But it always means taking the process of normalization hostage by creating a crisis. This crisis might be a deliberate violation of an agreement, a weapons test or even an attack. The diplomats rush for their calfskin briefcases and the latest crisis is resolved. Iran gets what it wants and leftist diplomats claim that the end of the latest crisis is proof diplomacy works.

They carefully avoid the question of why the latest crisis occurred or why there are so many of them.

This is the diplomatic version of an abusive relationship. Iran slaps around Obama, but when the cops arrive, Obama curses out the cops and yells that everything is fine. When the cops take Obama aside, he explains that it’s the hardliner IRGC side of Iran that is abusive, but that he’s in a relationship with the loving moderate side of Iran that doesn’t really mean it when it shouts “Death to America.”

It’s not just an episode of COPS. It’s also what the Democratic Party’s foreign policy looks like now.

If you think normalization with Iran is bad now, imagine an Iranian terror attack on American soil that kills 85 people and leads to a cover-up of such massive proportions that it includes the murder of a top prosecutor. It happened in Argentina. It would be foolish to imagine that it couldn’t happen here.

Ever since the nuclear deal, Iran has been escalating its provocations. The IRGC is confident enough to imprison and humiliate American sailors. How long will it take until it’s confident enough to carry out a major terrorist attack in the United States? If “normalization” continues, we may find out.

Iran’s biggest hostage is the wishful thinking of Western traitors. No amount of human hostages could possibly give the terror state as much leverage as being able to fulfill or deny their diplomatic dreams.

As long as Democrats and Eurocrats continue to focus on the impossible objective of full normalization with a Jihadist state that literally believes they are the devil, they will ignore almost any Iranian provocation or attack as just another bump on the road to diplomatic utopia.

This is how normalization becomes collaboration. It’s how diplomacy turns into treason.

Carolyn Elkins: My Case for Cruz