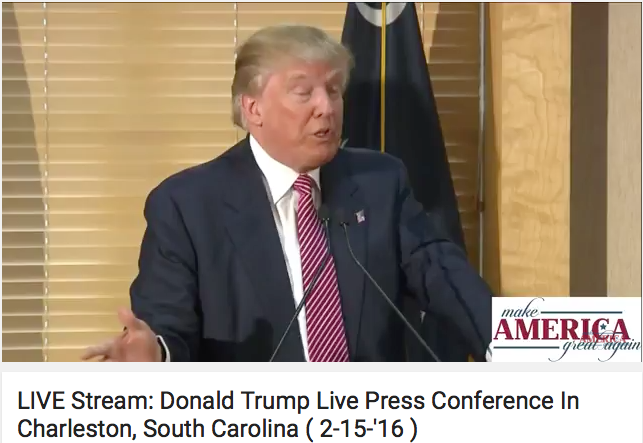 Trump expressed his disappointment in the Republican Party, the RNC, and he stood strong on his insistence that 9/11 was  President George W. Bush’s responsibility. “I keep hearing he kept the county safe after 9/11, what about during?  The worst attack on this country, it was during his presidency.”

The bulk of his conference was restating his belief that Ted Cruz is a “liar” and a “cheater”.  “The good ones don’t get caught,” he said.

Other topics he discussed:

Republican Party:  “The Republicans have been very very disappointing.  I always say Obama is the worst negotiator I’ve ever seen with everybody but the Republicans.”

South Carolina debate:  “I thought it was my best debate but I was attacked by everybody…I was being attacked by the moderators…that’s why they got good ratings.”

Sen. Cruz’s eligibility:  “If Cruz ever got the nomination the Democrats are gonna file a lawsuit.  So if I file it, I have a very good lawyer…If I were him I’d advise him, because I’m more moral than he is in my opinion…”

Building support:  “I’ve received so many calls, the most unsuspecting people that you would not believe.  I’m a unifier. Obama is not a unifier, by the way…”

On winning South Carolina:  “My only worry about South Carolina is my opponents lie.  Especially Cruz, I’ve said he’s the single worst liar Ive ever seen.  If people believe the lies, then, ya know we won’t make america great again because nobody can do it but me…they’re all bought & paid for by special interests…They’re not gonna make good trade deals…We’re gonna become rich again and great again..

On losing Iowa:  “Iowa should overturn the election…what Cruz did is a fraud.”

The RNC:  “The RNC is in default.  When somebody’s in default that means the other side can do what they have to do.  The RNC gave all the tickets to special interests…I had my wife and my kids because I don’t have donors…We’ve warned them twice and they don’t listen.  The RNC is controlled by the establishment , the special interest snap the donors.”