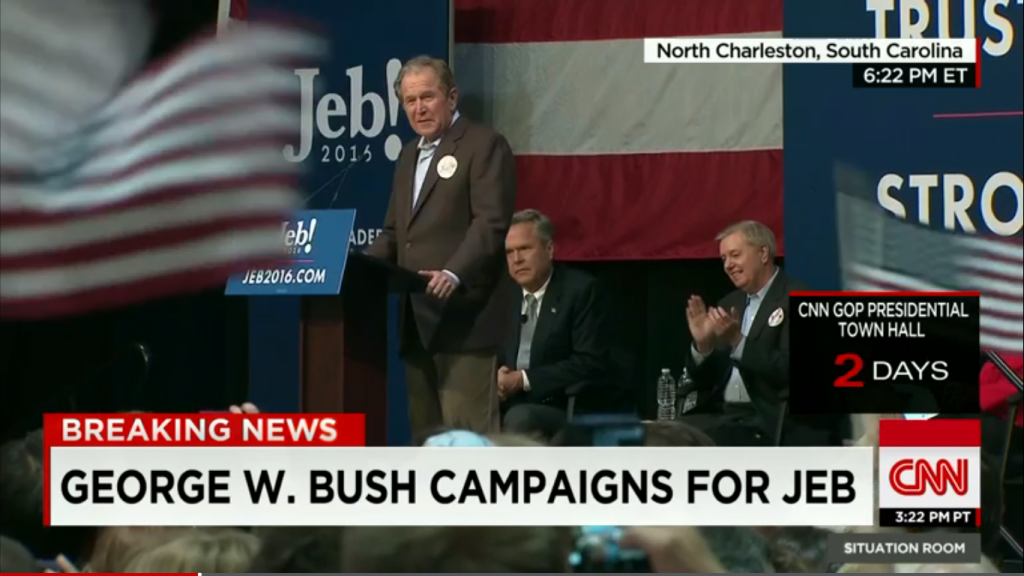 Former Florida Governor Jeb Bush, who has struggled to break out the pack all while spending the most money to finish sixth in Iowa and fourth in New Hampshire, has brought some brotherly love in hopes it will help him come out with a strong victory in South Carolina on Saturday.

The former President George W. Bush, accompanied by his wife and former First Lady Laura, has avoided the limelight since leaving office in 2009.  However he returned in his first public appearance on behalf of his younger brother Jeb during a campaign rally Monday evening in North Charleston, South Carolina.

“Jeb is a man of humble, deep and genuine faith,” the former president said to the 2,500 attendees in the North Charleston Performing Arts Center. “Faith that reveals itself through good works, not loud words.”

Despite being a wartime president, Pres. Bush remains popular in conservative South Carolina, the state that helped propel him to the Oval Office.  Then in 2000, the Palmetto State revived the former president’s campaign bid after losing the New Hampshire primary.

Now his younger brother Jeb is looking to continue the family’s winning streak, but with five critical days left until the primary, its not looking good for the Florida governor. Recent South Carolina polls have Jeb in fourth place behind Donald Trump, Ted Cruz and Marco Rubio. The best Jeb can hope for is to beat Rubio for the third place spot as both remain locked in a close battle, with Rubio polling at 14% to Jeb’s 13%.

Since announcing his campaign bid in June, Jeb has sought to distance himself from his family name to create his own path. His campaign logo is printed simply as “Jeb!” without his last name. Once announced, Jeb couldn’t dodge his family legacy, struggling to answer what makes him different than his bigger brother as well as stumbling over questions about the Iraq war.

But all that changed when Trump began attacking Jeb by invoking his brother into the mix, calling George W. a “disaster” for the 2003 Iraq war as well as being “responsible for the September 11 attacks”.   After that, the Bush family began to play a more active role in Jeb’s presidential campaign. Just last week, Bush’s mother and former First Lady Barbara Bush, was out on the trail with Jeb in New Hampshire, strolling through the snow as she charmed the crowd for her younger son.

“Strength is not empty rhetoric, it is not bluster, it is not theatrics,” the former president said. “Real strength, strength of purpose, comes from integrity and character and in my experience, the strongest person usually isn’t the loudest one in the room.”

“There seems to be a lot of name calling going on, but I want to remind you what our good dad told me one time – ‘labels are for soup cans.’”

Pres. Bush’s twenty-minute address made reference to front-runner Trump’s rhetoric, his personal assessment of his brother’s qualifications, and reflecting his times as president during the attacks on September 11, 2001.

“I understand that Americans are angry and frustrated, but we do not need someone in the Oval Office who mirrors and inflames our frustration,” the former president said. “We need someone who can fix the problems that cause our anger and frustration, and that person is Jeb Bush.”

On his personal response to the September 11th attacks, the former president recalled how his day began learning that a plane had crashed into the World Trade Center. “On the way to the Air Force One from that school, Condi called me and said a plane has hit the Pentagon,” the former president said in a somber tone. “I felt the first one was an accident, the second was an attack, and the third one was a declaration of war. I became something that no president should ever want to become – a wartime president.”

He urged voters to back a candidate with experience and character. “I have seen Jeb in action,” the former president said. “He will be a strong and steady hand when confronted with the unexpected.”

Before the joint Bush brothers rally, the former president met privately with South Carolina Governor Nikki Haley to court an endorsement, an endorsement that most of the candidates are looking to score. Haley has yet to endorse a candidate for the primary. In his remarks, he praised the South Carolina Governor. “Thank goodness our country welcomed her parents from India when they immigrated here in 1969.”

After his remarks, the former president introduced Jeb as his “little, big brother” and brought him onto the stage.  From there, Jeb was more direct in his attacks against Trump.

“I thought it was a little strange that a front-running candidate would attack the President of the United States who kept us safe while he was building a reality TV show,” Jeb said. He added it was weird for the front-runner to discuss impeaching a Republican two-term president who is extraordinarily popular “for good reason” among Republicans.

“Some of the dialogue back and forth made me wonder…If I close my eyes, I thought it was Michael Moore on the debate stage,” Jeb said.

In closing, Jeb pointed to how his campaign is bigger and better than Trump. “I can beat Hillary, I can promise you that,” Jeb said to a roaring crowd. “The only way we win is to do what the Republicans, when they win, always do. Campaign like George W. did, campaign like Ronald Reagan did.”

BREAKING Trump Press Conference: "The Republicans have been very disappointing"