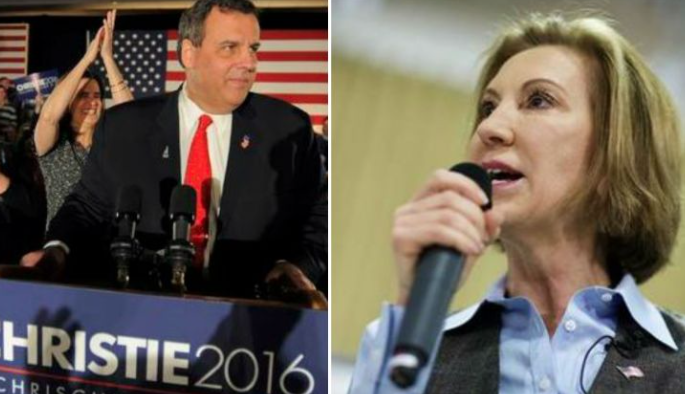 “I’ve said throughout this campaign that I will not sit down and be quiet,” Fiorina said in a message to supporters. “While I suspend my candidacy today, I will continue to travel this country and fight for those Americans who refuse to settle for the way things are and a status quo that no longer works for them.”

Today, I am suspending my campaign. My full statement is here: https://t.co/8QElLZoc1W

The White House bid for Fiorina was considered a long shot, running in a crowded field filled with former and current governors and senators, a former neurosurgeon, and real estate mogul. Entering the race in May of last year, Fiorina was the only female candidate who struggled to gain any traction until the first Republican debate.

Dominating the undercard debate stage, Fiorina breakout performance gained her a spot at the prime-time lineup at the second debate, which helped garnish popularity and interest for her candidacy. She would yet again dominate headline with her strong performance with her comments against Planned Parenthood and her response to personal attack from Donald Trump who criticized her appearance. Her strong debate performances led to Fiorina rising poll numbers, where she was considered a top-tier candidate over the two freshman senators who now dominate the polls.

However, Fiorina was unable to sustain the momentum and her poll numbers quickly dropped as she failed to convince voters that she was best suited with her business resume to become commander-in-chief. Another failure in her campaign was the lack of ground organization, where her super-pac was handling most of her ground game in Iowa and New Hampshire, since Fiorina didn’t have a campaign field office for either two early voting states. Combination of low poll numbers and lack of media attention dwindled her support as she was relegate back into the undercard stage right before the state began to take focus before the Iowa caucus.

In announcing her decision, Fiorina urged young girls and women across the country to not critics define them. “A feminist is a woman who lives the life she chooses and uses all her God-given gifts,” she said in her statement. “And always remember that a leader is not born, but made. Choose leadership.”

Separately after Fiorina dropped out, it was confirmed that New Jersey Governor Chris Christie was suspending his bid for the White House. During his primary watch party, Christie hinted to supporters that he intended to go back home from New Hampshire instead of heading to South Carolina to “take a deep breath” and reevaluate his candidacy.

Christie performed worse than he expected in New Hampshire, finishing sixth with just 7% of the vote. The New Jersey governor embarked on a strategy solely focusing on winning New Hampshire with the hopes that a win would place him into the top tier of the establishment Republican pack.Instead the runner-up winner went to Ohio Governor John Kasich with former Governor Jeb Bush finishing fourth and Senator Marco Rubio finishing fifth. // 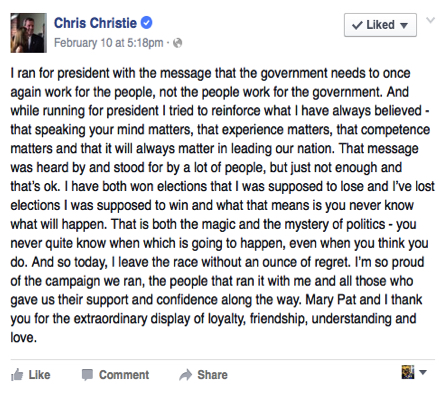 Entering the race with personal baggage, including the so-called “Bridgegate” scandal, and angered many Republicans by publicly embracing President Obama just days before the 2012 election, Christie was able for a brief period saw his poll number rising to become considered one of the top tier candidates along with prominent endorsements from top New Hampshire Republicans and newspapers. However, Super PACs supporting his rivals who were all vying for the establishment lane unloaded on Christie, attacking him on his record in New Jersey and past statements on gun control and abortion. This in turn caused Christie’s favorability to drop and with a small campaign war chest to spend, it couldn’t help the Governor to attack back on his opponents.

The GOP debate held in New Hampshire just days before its primary left a lasting mark for Chrisite, as he had nothing left to lost, by attacking Rubio’s lack of experience and his repetitive, robotic answers to questions. It earned the governor strong reviews for knocking the Florida Senator off his tracks, causing damaging to Rubio’s momentum. However, the attack was also a kamikaze trigger to Christie, hurting him more than helping him as New Hampshire voters were turned off and switched their votes to Kasich at the last minute.

A day after dropping out of the presidential race, Christie said to a call to donors and supporters that he saw “no pathway to victory” after his New Hampshire showing and failure to qualify for the upcoming South Carolina GOP debate hosted by CBS. “I wasn’t going to be on the stage for the debate, and if I wasn’t going to be on the debate, we just didn’t see a pathway to victory,” Christie said.

Neither candidate have announced their decision to endorse any of the six remaining candidates left in the 2016 race.

"But ISIS Attacks Muslims, Too!"