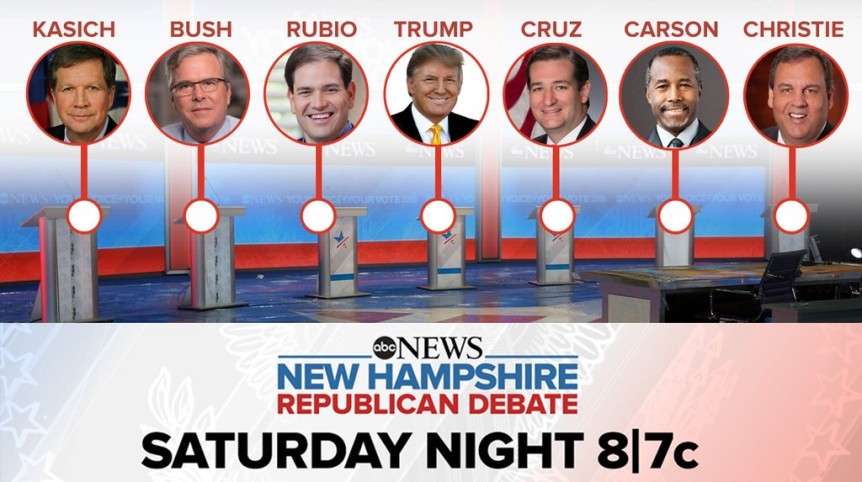 The final face-off before Tuesday’s New Hampshire primary held at Saint Anselm College will include seven candidates who have met the threshold to appear on the main stage and Carly Fiorina is not one of the seven.

The seven candidates have qualified to appear on the debate based on either three of the criteria ABC News established in late January. The following qualifications were based on the following:

Carly Florina failed to meet all of the three of ABC’s qualification measures. She didn’t win; place or show in the Iowa caucus and failed to average in the top six in averages of national or New Hampshire polls. Based on her poll average, according to Real Clear Politics, Florina is running in 8th place nationally with an average of 2.3% as well as in 8th place in New Hampshire with just an average of 3.5%.

Saturday’s debate will be the first time a network will not have an undercard debate for candidates who failed to make the cut for the main stage. Last undercard debate before the Iowa caucus had Florina, former Governor Mike Huckabee, former Senator Rick Santorum, and former Governor Jim Gilmore. After the caucus, both Huckabee and Santorum dropped out, leaving Florina and Gilmore the only remaining candidates who won’t be invited to appear in the upcoming debate.

The former CEO of Hewlett-Packard is the only candidate to alternate between both the undercard and main stage debates. She began in the first debate in August in the undercard debate where her performance led her to make an appearance on the main stage the next debate. Fiorina began to surge in the polls that would continue on her momentum as a top-tier contender for a short time. By January, Fiorina poll numbers nationally would regulate her back into the undercard stage in the last two debates.

Fiorina sent an open letter to the Republican National Committee prior to the ABC announcement, speaking out on the exclusion while urging them to intervene on the “broken debate process.”

“Networks are making up these debate rules as they go along– not to be able to fit candidates on the stage–but arbitrarily to decide which candidates make for the best TV in their opinion,” Florina wrote. “Now it is time for the RNC to act in the best interest of the Party that it represents.”

She added: “There are only 8 candidates left. It is time for the RNC to demand that media executives step aside and let voters hear from all of us. I trust you will act appropriately.”

Throughout the day, Fiorina received extensive lobbying support from current and former elected officials, along with media personalities all urging ABC to include Fiorina in the debate.

“Hey @ABC: put @CarlyFiorina on the debate stage! She got more Iowa votes than John and Chris. Don’t exclude only woman,” Romney tweeted out.

Gingrich also tweeted out to have Fiorina added on the debate stage.

.@abcnews should put @CarlyFiorina in the new hampshire debate.she came in ahead of kasich and christie. She has earned a spot.

New Hampshire Senator Kelly Ayotte tweeted her statement in support of Fiorina. “Carly Florina has campaigned hard in NH to earn support from voters,” Ayotte said in her statement. “ABC News’ decision to exclude her from Saturday’s debate on the eve of our primary, while she is outperforming one of the other debate participants in New Hampshire polls, undermines our role in the primary process, and I urge ABC to allow Ms. Florina to participate.”

Carly is one of the best story-tellers @GOP has

Only one poll has mattered so far—& she got delegates

She shld be on the #GOPdebate stage

Prominent media figures such as Joe Scarborough, and Chris Matthews have also joined the growing chorus calling for ABC to allow Florina a spot to participate.

@CarlyFiorina needs to be on the debate stage! — Joe Scarborough (@JoeNBC) February 4, 2016

Cruz on the campaign trail told reporters that the decision from ABC “is a mistake.”

“She has worked hard, she has run a diligent campaign, she’s inspired a lot of people and she deserves to be up there on that stage,” Cruz said. “And so I would encourage the organizers of the debate to include Carly there. I think she belongs there and I think she would add a beneficial element to the discussion and the debate.”

With 9 Republicans left, I call on the RNC to get rid of arbitrary requirements for debates. Americans deserve to hear from every candidate.

At the end, ABC refused to oblige. Fiorina’s spokeswoman Sarah Isgur Flores tweeted after the announcement to point out how Fiorina results in the Iowa caucuses “beat two of the establishment’s guys.”

Excluded from both debates this year and Carly *still* beat two of establishment’s guys in actual election. #GameOn #LetCarlyDebate

The ABC GOP debate is scheduled to begin at 8 p.m. ET and will be moderated by “World News Tonight” anchor David Muir and Martha Radiate along with additional questions being asked from the event co-host WMUR from political director Josh McElveen and Mary Katharine Ham.