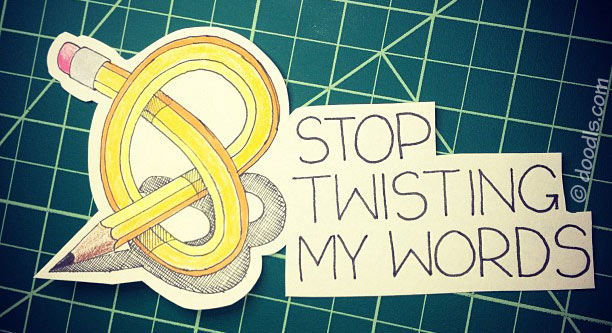 Why do socialists like Sanders and Obama like to twist our language? The New Left is closely tied to the linguistic strain of prescriptivism, which started with Noam Chomsky. Words are not what they are; they are defined by their effects on your feelings. For example: “abortion” is a sophisticated, off-putting word of foreign origin. Socialists change it to “pro-choice,” which makes it sound: 1) positive – it motivates the crowd to unite “Alinsky style” and follow; 2) it takes away the “fetus stigma” and focuses on the desperate woman, who is invariably alone, needing to lean on someone (insufficiency, dependence, solitude – is taken away by the icon-politician who suddenly rises as a husband-father figure and directs the woman to “march left-forward!”); 3) “pro-choice” also implies, by employing the preposition “pro” that it is pro-gressive to go with the flow and forget about the past. Aborting a baby thus becomes of no more significance to the woman than dying her hair.

I cited “abortion” as an example only. However, you are probably not aware of the fact that IMMIGRATION AND NATIONALITY ACT \ INA: ACT 101 – DEFINITIONS \ Act 101(a)15P Sub.34 (which follows the definitions of an “immigrant” and a “refugee”) defines abortion as one of the grounds for consideration for the “political refugee” status:

“[a] person who has been forced to abort a pregnancy or to undergo involuntary sterilization, or who has been persecuted for failure or refusal to undergo such a procedure or for other resistance to a coercive population control program, shall be deemed to have been persecuted on account of political opinion, and a person who has a well-founded fear that he or she will be forced to undergo such a procedure or subject to persecution for such failure, refusal, or resistance shall be deemed to have a well-founded fear of persecution on account of political opinion.”

Of course not. Here, no-one in the “ruling elite” (or their lawyers, for that matter) will speak of anything other than “pro-choice.” Thus, we accept women who are escaping “pro-choice” because they do not have a choice and offering them a new choice: “March left or go back where you came from!” 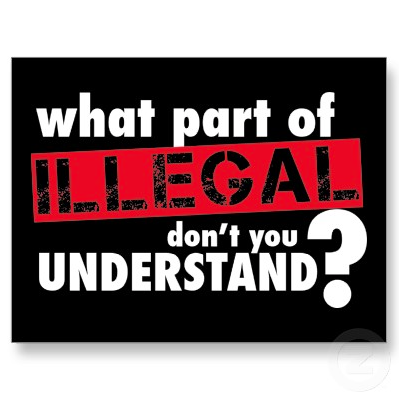 As to “illegal immigrants,” Jorje Ramos will ask: “How can a human being be ‘illegal’?” How about: when you are in the country illegally. If I enter someone’s store after hours, I am committing trespass, arguably attempting a burglary. I will certainly be held liable because I was there illegally. What is the problem the left have with this word? Let us look at what they are doing: by negating it or erasing it, they purport to say that the laws we have on the books – firm, well-thought-out laws, supported by a long line of precedents and legal argument – that these laws were created by some “old white men” to benefit themselves. They point at the Statute of Liberty and read the verse to us about “poor huddled masses longing to breathe free.” As no-one teaches immigration or law in high school, 90% of Democrat voters will believe it: Oh, what a powerful image! What language.

Our country is a nation of immigrants, yes, but we all came here legally. Do you know what the criteria were for entry via Ellis Island? Immigration records date back to 1855. From 1892 to 1953, people who had any one of the following characteristics were sent back to Europe: 1) extreme poverty, 2) sickness, mental or physical weakness, 3) criminal record, and – mark this – 4) those showing any signs of religious bigotry or intolerance. That is what made us strong: the selection of the strongest, toughest, hard-working people who mean good and commit no evil.

As I write these lines, the left is proposing a new change of vocabulary: the “illegal immigrant” is henceforth to be called an “economic refugee.” This was coined by two linguists – George Lakoff and his New Left pundit pupil Sam Ferguson. An “economic refugee” is defined by them as someone who “seeks to escape oppressive poverty…because of global socio economic injustice issues.” The core of this problem is that poor people want to come here to be better off. Economic refugee thus sounds correct – about the same as when we say “mentally challenged” for someone who is an idiot. Fine, we do not want to call people idiots.

This is important, because if the so-called refugees cannot prove persecution, they are not legally refugees. They can only be immigrants, in which case they must have a visa, in order to be “legal immigrants.” If they do not possess a visa, they are, by definition, “illegal immigrants.” To call them “economic refugees” is wrong, and in itself not legal. This term simply legally does not exist.

The New Left is looking up to linguists and commands their lawyers to twist the law to fit their idealistic goals of curing “global economic poverty.” It will not be cured by calling a spade a toothpick or a “shovel-ready job” a two-week salad picker who stays on social support and subsidies as a permanent “economic refugee” forever after. We do not need any grand new “comprehensive immigration reform.” We have had those in the past. All this funny adjective “comprehensive” means that it is thick, look scholarly, but no-one comprehends it, no-one knows “what’s in it” – except, perhaps, the special interest groups and lobbyists with their pieces of pork… I bet they could quote page and line with respect to what “they got” in the new “omnibus.”

America Welcomes Relief at the Gas Pumps (But For How Long?)

Diversity and Multiculturalism: Longing for “The Other”