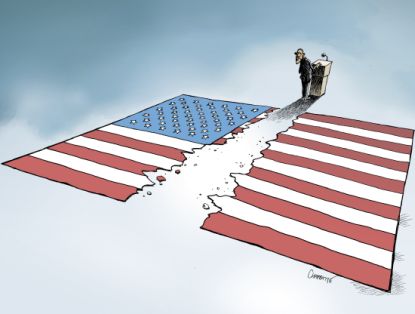 With all of the racial tensions in America today, many are scratching their heads and wondering what went wrong.  We have had the privilege of having the first black President in The White House for seven years, and race relations in America are at an all time low.  Many thought that after the election of Barack H. Obama as President, every thing would be changed for the better in regards to racial relations in the United States.  Many Americans voted for him in hopes of finding a new tone in regards to civil rights, and that America would enter into a post racial era with healing. Everything would smooth itself out, because America would have it’s first black President, and his promises of transparency and “Hope and Change” would bring us all together to sing a new song of unity, and that we would finally realize Dr. Kings dream of racial harmony.   After all, Obama promised to “fundamentally transform” America. Therefore, many non-minorities voted for Mr. Obama hoping for the best, but are now realizing that America’s race relations have taken a turn for the worse.

What went wrong? How could this be? Is this a fluke or is this President setting America back on the path of racial injustice and dividing us as a united nation?  Americans have now waited for seven years, but racial relations have worsened, and the President has not used the occasion to bring us together, as was hoped.  His Department of Justice has also dealt America some nasty blows. They have used events around the country to make unnecessary statements and open up investigations that have done more harm than good to race relations.

Most Americans are confused as to why this has happened, and many still have hope that our change will come, but is that hope going to come under President Obama? His time for bringing America together is running out, and some of his Executive Orders and policies are doing more damage to our racial relations.

I for one never thought that Mr. Obama would bring America together. I never had any confidence that he would fix the racial divide in our country. I planned for the worse, and expected that he would not let me down. So far he hasn’t, and he seems to be on a personal mission to destroy America not only by dividing us racially, but in other ways as well.

He has done much harm to our national security, our military, our education system, and to America’s healthcare system. More people are on the rolls of government dependence under his Presidency, and there is much more civil unrest by groups such as Black Lives Matter, the Nation Of Islam; and the New Black Panthers.

It did not take long for the real Barack H. Obama to reveal himself. It began when a friend of his came home from vacation. That is when we heard the famous “the police acted stupidly” statement from our President that lead to the much talked about, do nothing about it, beer summit.

This was the beginning of a downward slide and a revealing of Mr. Obama’s inner feeling’s about race in America. He went on a rampage and said that he knew how the average black person felt like living in America. We have heard the quotes from his book regarding his “white” grandmother and his famous “ if I had a son he would look like Travon Martin” statement.

These started folks to began to wonder if this President had a problem. We began to look back at the life of our President. Jeremiah Wright’s famous sermons began to take on a new light, and we saw that his Attorney General Eric Holder seemed to have a racial chip on his shoulder as well. Loretta Lynch has not eased up during her tenure as Attorney General either. Holder even spoke of blacks as “his people”, and failed to act on the complaints against the New Black Panthers and others.

There are many other examples, but I am sure that you have begun to see the light.

There is no healing and every day that The Lord sends there is a new charge of racism that comes from someone close to our President, or from those associated with his Administration. Even our Congress is afraid to act to stop him from abusing his power, because they don’t want to be labeled as racist.

Mr. Obama has a problem, but it dwells in his heart, his mind, and in his upbringing, and his worldview. Americans don’t trust him because he is on the wrong side of The Constitution and our Founding Principles, not because of his skin color. His policies have proven him to be a poor leader, not his race.

Let’s get over it, Mr. President, and realize that most citizens don’t want more government control or socialism. We want a President that loves his country, and leaders that will perform their duties, and who will stand up for our Founding Principles, and not condemn our nation, with endless apologies.  We want a better America where we can all live together as proud citizens regardless of or race, creed, or color.

Character is the standard that we should use, and if we do, we will find ourselves making much needed progress. We need and want progress that will move America closer together as a nation, and help us to continue to lead the world. Character matters, and past associations reflect upon who a person is and reflects their worldview. Character determines how people react and perform their duties. Knowing this, we can get a glimpse of why our President has gone so far off track. However, each American must also examine him or herself and tear down the barriers of disbelief and denial that our President or we ourselves possesses these traits. Having done so we can move forward and help in the healing process. We have much work to do; however it can be done. It is imperative that we unite as a nation and heal our land to leave a legacy for those who will follow in our footsteps.

We can, and we shall make America great again, by tearing down walls of division and becoming one nation under God once again. Let’s begin today for we must use “Freedom And Liberty or we shall surely lose them!

God bless each of us, and may he continue to bless America.

Daniel Greenfield: The Muslim Brotherhood is a Bigger Threat Than ISIS

Undercover Video: "Common Core Is All About the Money"