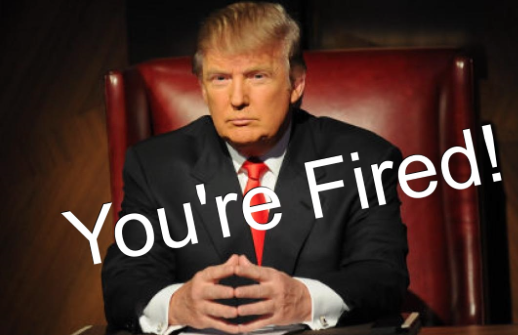 “When someone crosses you, my advice is ‘Get Even!’ That is not typical advice, but it is real life advice. If you do not get even, you are just a schmuck! When people wrong you, go after those people because it is a good feeling and because other people will see you doing it. I love getting even. I get screwed all the time. I go after people, and you know what? People do not play around with me as much as they do with others. They know that if they do, they are in for a big fight.” – Donald Trump, Art of the Deal

Donald Trump declaring he won’t participate in tomorrow night’s debate is extremely disturbing. Sure, he feels Megyn Kelly/FOX News once treated him “unfairly”, but unfortunately life in the Real World is like that. When you’re a regular person living in the Real World and don’t have people saying yes to your every whim, yes, life is sometimes unfair. But publicly denouncing a presidential debate simply to get even with Kelly/FOX should be a giant red flag to everyone.

Is this indicative of what life with a President Trump would be like? During the CNBC debate the candidates were asked what their biggest weakness is. Trump said, “I’m too trusting and when they let me down, if they let me down I never forgive…I find it very, very hard to forgive people that deceived me. So I don’t know if you would call that a weakness, but my wife said let up.”  I’ve heard him say similar things on his television shows.

So would Trump rule America with a vengeance, like a real-life “Apprentice” in which he continues to say, “You’re fired!” to everyone he doesn’t like? And if he surrounds our country with that ‘yuge, beautiful wall’, who might he deem our “enemy”? If someone like Megyn Kelly goes on vacation to Italy will she be able to get back home?

As a successful businessman, one can only imagine how many people Mr. Trump has had to plow over to get to that top echelon.  Enacting revenge on enemies might work for multi-billionares, but down here on earth in the Real World, Mr. Trump is doing is the opposite of everything I’m personally fighting against politically.  And we’re only in the primary election phase….

(Note from author:  Although I have publicly endorsed Senator Ted Cruz, I have done so separately from my website PolitiChicks.com.  Until now, I have never publicly said anything critical of Donald Trump but as a political activist I felt I needed to say something about his withdrawal from the debate.)