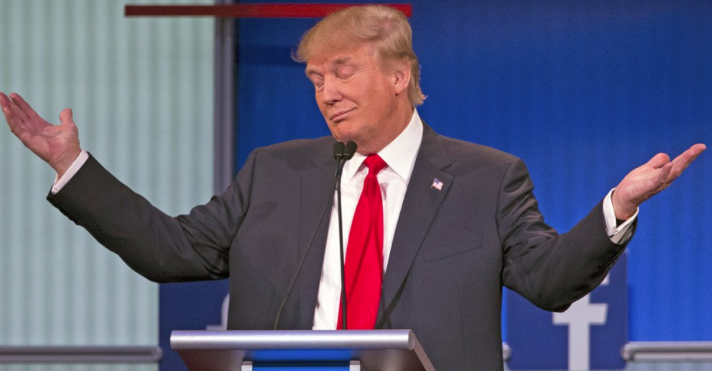 Last September GOP consultant Rick Wilson wrote in The Daily Beast that Trump supporters “put the entire conservative movement at risk of being hijacked and destroyed by a bellowing billionaire with poor impulse control and a profoundly superficial understanding of the world . . . walking, talking comments sections of the fever swamp sites.”

Insulting? You bet. But the laugh-out-loud moment for me came when Wilson defined us as The Troll Party, writing,

“The Troll Party puts nationalist, anti-establishment bluster before the tenets of our constitutional republic.”

“The contagion hasn’t infected the entire GOP, not by a long shot. But it’s spreading. The traditional elements of limited-government fiscal conservatives, social conservatives, and defense hawks are still there. But the Troll Party screams louder, and its members have reached a point where they are more than content to watch the world burn around them if they don’t get their way, right this minute.”

Somebody better wake this guy up. We’re not the ones shredding the Constitution! The radical Left is chopping her up into little pieces, aided and abetted by the GOP establishment. Many of us ARE the fiscal conservatives, social conservatives, and defense hawks.

What is even more amusing is that months after Wilson penned this piece and his delusional frame of the present GOP, their beloved Speaker, Paul Ryan, exercised his red coat brand of leadership in passing of the omnibus bill—a monster costing us the $1.1 trillion government spending (with the support of the Republican controlled Congress) last week (which apparently nobody had a chance to read the 2,242 pages).

Somebody should tie this guy up and read it to him, noting that neither defense hawks nor fiscally responsible citizens SUPPORT THIS BILL.

So why are people supporting Trump instead of a GOP favorite?

Unless we elect someone who can stop the Trojan Horse invasion, actually get the wall built and get us off the economic cliff, there won’t be a sovereign solvent nation, much less any political parties left.

Look— I could produce a polished piece on behalf of Donald J. Trump. But no way can I match Brietbart’s News Diane West: It’s Time to Rally Around Trump article, So I’ll let the brilliant and talented Diane West explain why, as Trump supporters, we do not care if the radical Left, liberals, the political class, including the establishment GOP or pseudo-intellectuals “get us.”

“ ‘Brent Bozell has called on conservatives to rally around Sen. Ted Cruz (R-TX) or the Republican presidential nomination. Ted Cruz is a good man and a fine candidate — my own second choice — but I believe GOP frontrunner Donald Trump is the candidate for American patriots to rally around.

Bozell states that Cruz is the one candidate who will return the United States to “her Constitutional foundations and Judeo-Christian values,” explaining:

On every issue of crucial importance to conservatives—defunding Planned Parenthood, ending the Obamacare nightmare, reducing the size of government, opposing amnesty—Cruz is not only with conservatives, he’s led the fight for conservatives.’

To be honest, if these were the only issues under discussion in this GOP presidential primary season I would hardly be able to make myself pay attention. It’s not that they are unimportant issues. Personally, I support every one of them. But they are not existential issues. They are not the issues on which the very future of the Republic hangs. They are issues that a responsible Republican House and Senate, if they were loyal to their oath and to their constituents, could today begin to rectify all by themselves.

If they did — or if, say, a President Cruz were to ensure that Planned Parenthood was defunded, Obamacare ended, government trimmed, and amnesty once again staved off for another election cycle — we would all rejoice. However, the Constitution, the Republic, would be no more secure. On the contrary, they would still teeter on the edge of extinction, lost in a demographic, political, and cultural transformation that our fathers, founding and otherwise, would find inconceivable — and particularly if they ever found out that the crisis took hold when We the People lost our nerve even to talk about immigration and Islam.

It is in this danger zone of lost nerve and the vanishing nation-state where the extraordinary presidential candidacy of Donald Trump began. Like the nation-state itself, it started with the concept of a border, when Donald Trump told us he wanted to build a wall. Circa 21st-century-America, that took a lot of nerve.

After all, Americans don’t have walls. We don’t even have a border. We have “border surges,” and “unaccompanied alien minors.” We have “sanctuary cities,” and a continuous government raid on our own pocketbooks to pay for what amounts to our own invasion. That’s not even counting the attendant pathologies, burdens, and immeasurable cultural dislocation that comes about when “no one speaks English anymore.” A wall, the man says?

The enthusiasm real people (as opposed to media and #GOPSmartSet) have shown for Trump and his paradigm-shattering wall is something new and exciting on the political scene. So is the “yuge” sigh of relief. Someone sees the nation bleeding out and wants to stanch the flow. Yes, we can (build a wall). From that day forward, it has been Trump, dominating the GOP primary process and setting all of the potentially restorative points of the agenda, compelling the other candidates to address them, and the MSM, too. Blasting through hard, dense layers of “political correctness” with plain talk that shocks, Trump has set in motion very rusty wheels of reality-based thinking, beginning a long-overdue honest-to-goodness public debate about the future of America — or, better, whether there will be a future for America. That debate starts at the border, too.

A well-defended border is an obvious requisite for any nation-state. It bears noting, however, that before Donald Trump, not one commander in chief, and (aside from former Rep. Tom Tancredo, R-CO), not one figure of national fame and repute I can think of had ever put it to the people of this land that a wall was a way to stop our border crisis: the unceasing flow into the nation of illegal masses of mainly Spanish-speaking aliens, among them terrorists, criminals (yes, including rapists and murderers) and transnational gangs. On the contrary, crime and chaos at the U.S. non-border are what every branch and bureaucracy of our government expect We, the People to accept as normal — and pay for as good citizens.

But good citizens of what — the world?

For many decades, the unspoken answer to this inconceivable question (inconceivable, that is, before Trump) has been yes. “We Are the World” has been the USA’s unofficial anthem, the political muzak of our times that we either hum along to, or accept in teeth-gritted silence for fear of censure (or cancelled party invitations). “Openness,” “multiculturalism,” “globalism” — all have been pounded into us for so long that I think Americans despaired of ever hearing anyone give voice again to a patriotic vision of American interests. Then Trump came along and changed the tune. Americans perked up their ears. Maybe a wall — which is just the beginning of Trump’s detailed immigration policy, which Sen. Jeff Sessions (R-AL) calls “exactly the plan America needs” — would make America possible again. That would be great, indeed.”

10 Things America Must Do to Defend Itself From Jihad