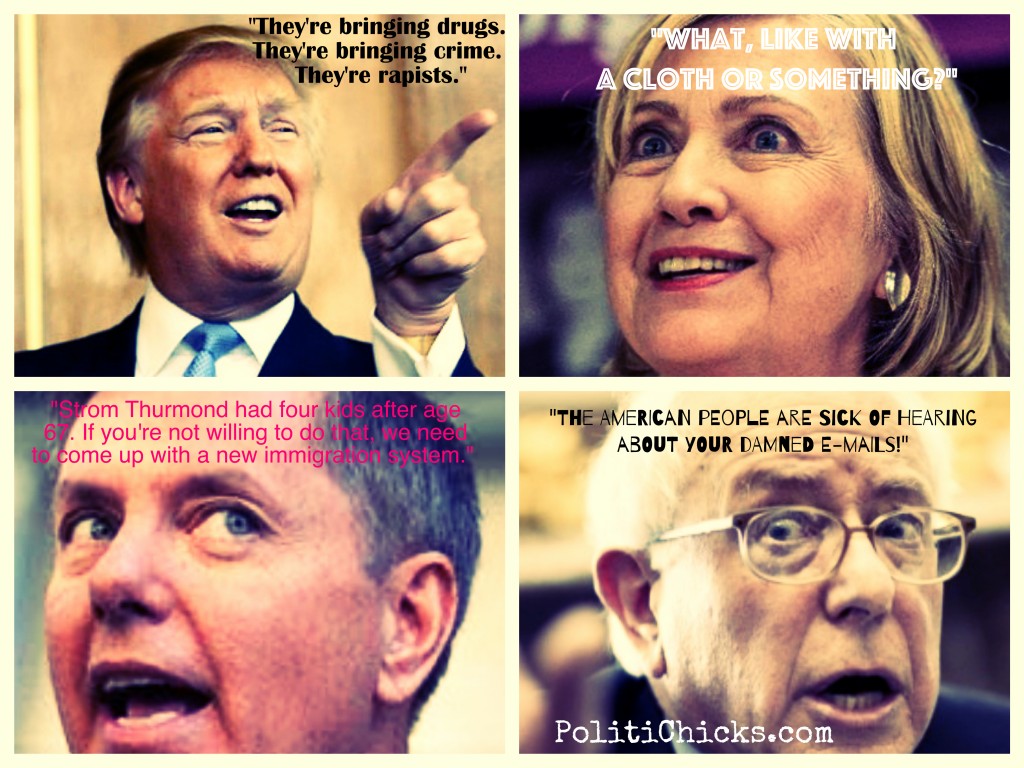 Another year has passed and a New Year is about to start. 2016 is a Presidential year and this election will be on the minds of all Americans. With 313 days until Election Day and a month before voters in the first state cast ballots, Americans everywhere will have to decide whom do they want, either a Republican or a (socialist) Democrat to be their next President.

As we kick in 2016 with a bang, lets rewind and remind readers of the best “Did they really just say that?” political quotes gathered from 2015. (Note: 2015 could definitely be a nominee for ‘Craziest Quotes of All Time’…)

During his presidential announcement speech, Trump set a tone that would strike a chord within Republican primary voters, leading him to become the frontrunner since his announcement. Hate it or love this quote, if it wasn’t for Trump, the media wouldn’t be focusing on this upcoming 2016 election and many wouldn’t partake in political discussions anywhere from the streets, to the bars and for some, even during pillow talk.

In the summer, Hillary saw fit to joke about her private email server scandal that plagued her campaign, almost tanking it.

After her Snapchat comment, Hillary faced tough reporters who pressed her on questions about wiping her email server before sending them over to federal investigation. When asked on whether she had wiped her server, Hillary responded with this quote while making a gesture of wiping something away.

During the first Democrat debate in October, Hillary was pressed on a question by moderator Anderson Cooper just days before her House Benghazi testimony. Sanders would interject into the question, making the biggest political mistake as he was gaining momentum in becoming the frontrunner.

Rand Paul was the first presidential candidate in 2015 to Periscope, a live stream video app where one can broadcast their activities live without edits to answer questions from twitter. One of the (annoying) questions that was asked of Paul, the third most asked question, was, “Is Rand Paul still running for President?” Amid his low single-digit poll numbers in months and lack of gain any tractions on and off during the campaign trail left people wondering what happened to Paul. Right after Paul’s testy response, another question popped up: “Where is Rand Paul in the polls?” in which a noticeably frustrated Paul answered, “This isn’t live, we can edit this, right?”

During the second debate held in Simi Valley, California, Graham talked about the need to reform the immigration system but used reference of his predecessor South Carolina to prove a point about legal immigration.

Donald Trump said this during a discussion with pollster Frank Luntz during the July 18 Family Leadership Summit.  Trump was questioning Arizona Senator John McCain’s stance as a war hero “because he was captured.”

After Graham joked about having more than one first lady when he becomes President, Sen. Kirk followed with a joke of his own.  We’ll just leave it right there.