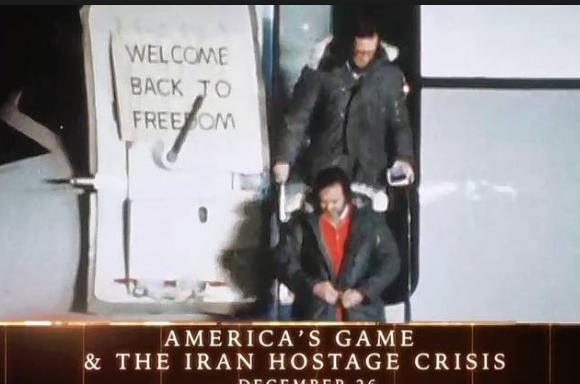 NFL Network recently aired The Timeline: America’s Game & The Iran Hostage Crisis – the story of the fall of the Shah, the rise of the Islamic Republic, the 66 American hostages and a tape. The NFL Network’s story arc consisted of one journalist’s quest to smuggle a broadcast of Super Bowl XIV to the Iranian hostages.

Alex Paen, correspondent for KMPC radio Los Angeles, convinced Iranian revolutionary guards to take a tape of the Super Bowl XIV between the Pittsburgh Steelers and the Los Angeles Rams inside the U.S. embassy. The guards relented. They thought the game innocuous, a mere distraction for the men and non-political form of entertainment.

For Paen it was about giving the hostages a moment of respite from their captivity. “It was about the Super Bowl being heard by the captive Americans,” he said.

Timeline’s director, Tate Donovan, spoke of the transcendence and unifying power of American football. “As Americans, we came together and we could agree on one thing.”

January 20, 1981, 52 hostages received a hero’s welcome when their plane touched down at Stewart International Airport in Newburgh, New York. Five days later the hostages were honored at the Super Bowl XV in a pregame ceremony celebrating their release and safe return.

In the years since their release several of the Iranian hostages have voiced their criticism of radical Islam and U.S.-Iranian relations.

After the attacks on 9/11, former Iranian hostage, Marine Sgt. Kevin Hermening, published a scathing indictment of Islamic terrorism in the Milwaukee Journal Sentinel. In it Hermening called for “the immediate and unequivocal deportation of every illegal alien and immigrant, with a focus on removing those of Middle Eastern descent, and especially those who reacted with glee at the horror of Sept. 11 (if you don’t have permission to be here, get the hell out!).”

“It is disturbing that a person put forward as a key foreign policy adviser for a presidential campaign holds and defends such extremist views,” said CAIR Government Affairs Manager Robert McCaw.

If anyone stood on the moral high ground to substantiate the threat of radical Islam, it is Hermening and his fellow Iranian hostages.

Forward to 2016, the Islamic Republic of Iran has not wavered from their radical ideology. Even the lifting of sanctions, the receipt of $150 billion in aid and frozen assets and the clearance to proliferate nuclear weapons, Iran remains resolute in their mission to establish an Islamic caliphate. Some would argue that the Iran Deal has proven to embolden that resolve. It is America who has wavered.

More specifically it is the appeasement policy of this administration, the president’s own shaming of criticism for Ahmed Mohamed’s ‘clock’, the sanctimonious chastisement of CAIR’s McCaw, it is Mark Zuckerberg’s censorship of dissent and Stephen Colbert’s post-Paris refugee mockery et al., that has precipitated America’s wavering and cowardice for not speaking out against radical Islam.

If Americans are guilty of anything it is this – electing leaders who have tried to ‘normalize’ America’s role in the world through misguided attempts at social reengineering and political quieting.

Nearly 36 years later America finds itself a lone superpower, and not by chance. We have fought hard to achieve the title from opponents both foreign and domestic.

Our appeasers, the ones who not dare not utter the words ‘victory’ or ‘radical Islam’, are the ones who have thrown the game. It is the negotiating from a position of weakness, the giving of billions in lethal aid to our enemies and abandoning our allies that has taken the wind out of the home team.

No, America has not forgotten those 444 days when Islamic radicals held Americans hostage in the U.S. Embassy in Tehran. We are just being shamed into not talking about it and believing that it is America’s fault.

Pastor Saeed is Back in the U.S.