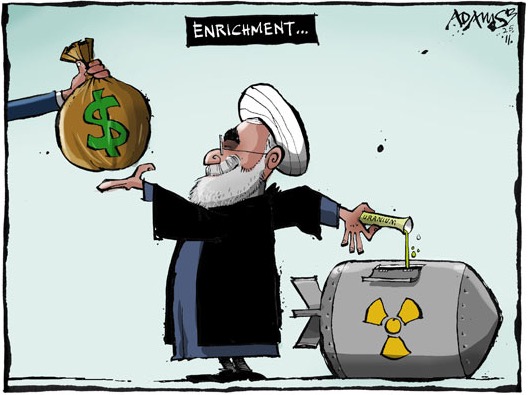 Six months after the historic Joint Comprehensive Plan of Action (JCPOA) was announced in June 2015 by Secretary Kerry as the deal that would prevent Iran from ever obtaining nuclear weapons, the truth is now apparent to everyone except the most diehard Obama supporters.   America gave Iran everything it demanded and even more, and in return got virtually nothing! While much as been written about the short comings of the deal itself and how it was almost completely one sided, very little attention has been given to what has happened since the deal was made. Let’s review the events that have occurred since the JCPOA was announced:

“Iran is following through on the nuclear deal it struck with a U.S.-led coalition in an utterly predictable way: It is racing to fulfill those parts of the accord that will allow it to collect $100 billion in frozen funds and end sanctions on its oil exports and banking system, while expanding its belligerent and illegal activities in other areas — and daring the West to respond.” The Post was referring to the UN panel that  determined that Iran test-fired a nuclear-capable missile on Oct. 10, in violation of a UN resolution that prohibits such launches. Moreover, it appears likely that a second missile launch occurred on Nov. 21, also in violation of Security Council Resolution 1929. The sole purpose of these ballistic missiles is to carry nuclear tipped warheads over distances as far as Europe and eventually North America. Iran already has missiles capable of hitting the entire middle east including Israel. The JCPOA prohibits testing of missiles capable of delivering nuclear warheads.

*reducing the centrifuges at Natanz from over 16,000 to 5,060 IR-1 machines, which will enrich uranium to 3.67 percent, and removing the associated infrastructure;

*reducing the number of IR-1 machines centrifuges at Fordow to 1,000 (328 will operate) and converting the facility for radioisotope production;

*reducing the stockpile of enriched uranium to less than 300 kilograms;

*removing the core of the Arak reactor and disabling it; and

*instituting the necessary transparency and monitoring mechanisms to implement Iran’s additional protocol and the continuous surveillance of key facilities.

The nine new conditions laid out by Khamenei creates a situation in which not only does the Iranian side refrain from approving the JCPOA, but, with nearly every point, creates a separate obstacle, such that executing the agreement is not possible.

The following are Khamenei’s nine conditions, and their implications: 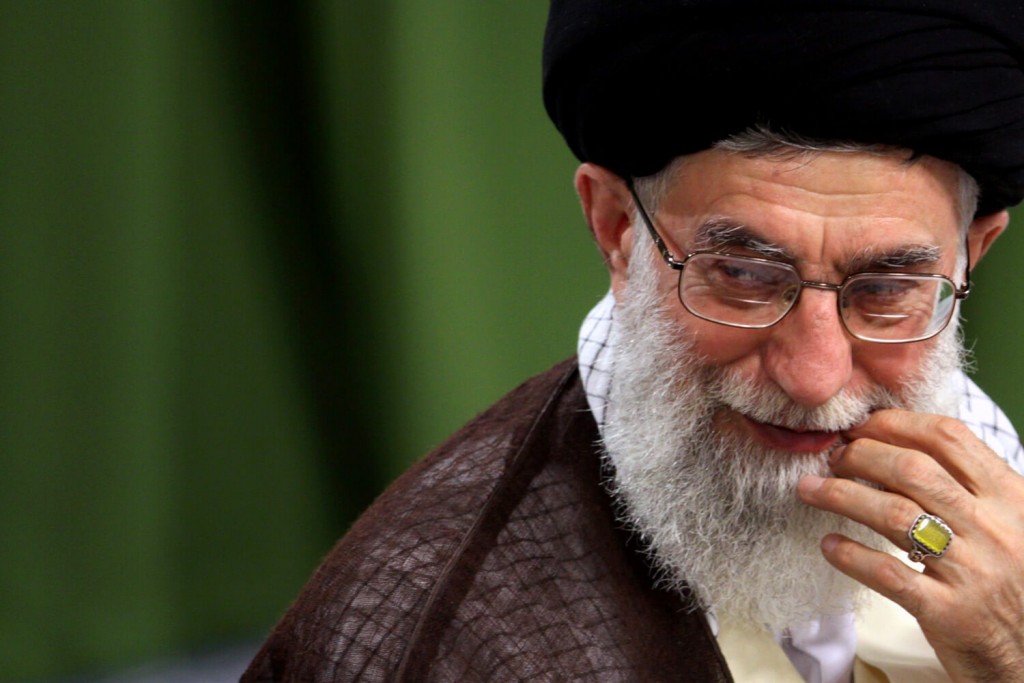 Khamenei’s Conditions For Iranian Execution Of The JCPOA

First condition: Khamenei demands that the U.S. and Europe lift the sanctions, not suspend them, and in addition demands “solid and sufficient” guarantees in advance that this will be done, before Iran takes its own steps and meets its own obligations under the agreement. These guarantees, insists Khamenei, must include, inter alia, an official letter from the U.S. president and from the EU undertaking to fully lift the sanctions. Furthermore, he demands that this letter will state that any declaration by the West that the “structure of the sanctions will remain in force” (i.e. allowing snapback) will be considered “non-compliance with the JCPOA” on the part of the West.

Implications: These conditions constitute a total change of the JCPOA. Khamenei is not allowing any execution of the JCPOA by Iran until this is accepted in writing by the other side, and thus he is nullifying the JCPOA as agreed upon on July 14, 2015.

Second condition: Any sanctions against Iran “at every level and on every pretext,” including terrorism and human rights violations, by any one of the countries participating in the negotiations will “constitute a violation of the JCPOA,” and a reason for Iran to stop executing the agreement.

Implications: This demand, that links the JCPOA to other issues and prohibits any punishment of Iran on any issue and for any reason, serves as an excuse for Iran to cancel the agreement.

Third condition: Under the JCPOA, Iran is obligated, following the JCPOA’s Adoption Day, to carry out its obligations concerning changing the function of the nuclear reactor at Arak and shipping out most of its stockpile of enriched uranium. Contrary to this, Khamenei is changing the timetable of the JCPOA, stating that Iran will not carry out these actions until after the International Atomic Energy Agency (IAEA) declares that it is closing its dossier on Iran’s “past and future issues (including the so-called Possible Military Dimensions or PMD of Iran’s nuclear program).”

Implications: This demand to change the timetable creates a situation in which Iran will not take action as stipulated in the JCPOA, and will not meet its obligations, before the sanctions are eased, also according to the JCPOA, but instead dictates that the sanctions must first be lifted completely and states that only then will Iran meet its obligations. Khamenei here is creating a situation in which the IAEA will not be able to report on Iran’s meeting of its obligations regarding the Arak reactor and regarding the shipping out of its enriched uranium by the target date of December 15, 2015, because Iran is not going to do so by then – thus the execution of the agreement is thwarted from the beginning.

Implications: Iran’s fulfillment of its obligations regarding the Arak reactor, as stipulated by the JCPOA, will be postponed until some unknown future date.

Fifth condition: Iran will carry out its obligation to ship out its enriched uranium to another country in exchange for yellowcake “on a gradual basis and on numerous occasions,” and only after “a secure agreement has been clinched to that effect, along with sufficient guarantees” that this exchange will be implemented.

Implications: The date for Iran to ship out its enriched uranium as stipulated by the JCPOA is postponed until some unknown future date. Khamenei is demanding that Iran receive in exchange for the enriched uranium not raw uranium as per the JCPOA, but instead uranium that has been enriched, albeit to a lower level than the uranium it ships out. This is yet another change to the JCPOA as concluded on July 14, 2015.

Sixth condition: Khamenei instructs President Rohani to begin, along with reducing Iran’s ability to enrich uranium under the JCPOA, immediately to expand Iran’s ability to enrich uranium with a 15-year long-term plan for 190,000 centrifuge SWU (Separative Work Units). “This plan,” he says, “must allay any concern stemming from some points entailed in the JCPOA appendices.”

Implications: This article nullifies the declared goal of the JCPOA, which is to reduce Iran’s nuclear enrichment capabilities.

Seventh condition: The Iranian Atomic Energy Organization must ensure continued nuclear research and development, in its various dimensions, such that in eight years’ time, Iran will not be lacking in enrichment technology. This, he says, is all in accordance with the JCPOA.

Implications: Any doubt or ambiguity regarding the content of the JCPOA will become the source of unending dispute and will paralyze any possibility of executing the agreement.

Ninth condition: Due to apprehensions that the other side, particularly the U.S., will break its promises or cheat, President Rohani must establish a “well-informed and smart panel” to monitor the execution of the agreement.

Implications: Khamenei is creating an administrative framework for perpetual delays in the execution of the agreement.

The JCPOA was never signed and apparently will NEVER be signed by Iran.  By now the world knows that U.S. Inspectors will never be allowed into. Hopefully the Iranian continual breaches of the document will lead to an insurrection in the Congress and eventually litigation to block the White House from unilaterally complying with the terms and releasing $100billion++!

Barry Nussbaum has more than 30 years experience working with elected politicians in both parties and with officials in Israel as well. Barry has worked in the the State Assembly in Sacramento, California and nationally with Senator Marco Rubio, Governor Mitt Romney, Congressmen Darrell Issa, Juan Vargas and the late Tom Lantos (among others), and Israeli Prime Minister Netanyahu. Throughout his successful career Barry served a series of appointments for four California governors. The son of holocaust survivors, Nussbaum works tirelessly to stop anti-semitism and is well respected for his many public appearances discussing the threat of radical Islam. Barry co-founded The Israel Group and spearheaded The March To Save America/Stop The Iran Nuclear Deal. He appears regularly on numerous news shows opining on national and international issues while editing the BarryNussbaumReport.com. Barry Nussbaum is currently launching AmericanTruthProject.Org which exposes threats to America and our way of life. To learn more visit: findbarry.com

Obama’s Executive Actions in the Name of Another Manufactured Chaos