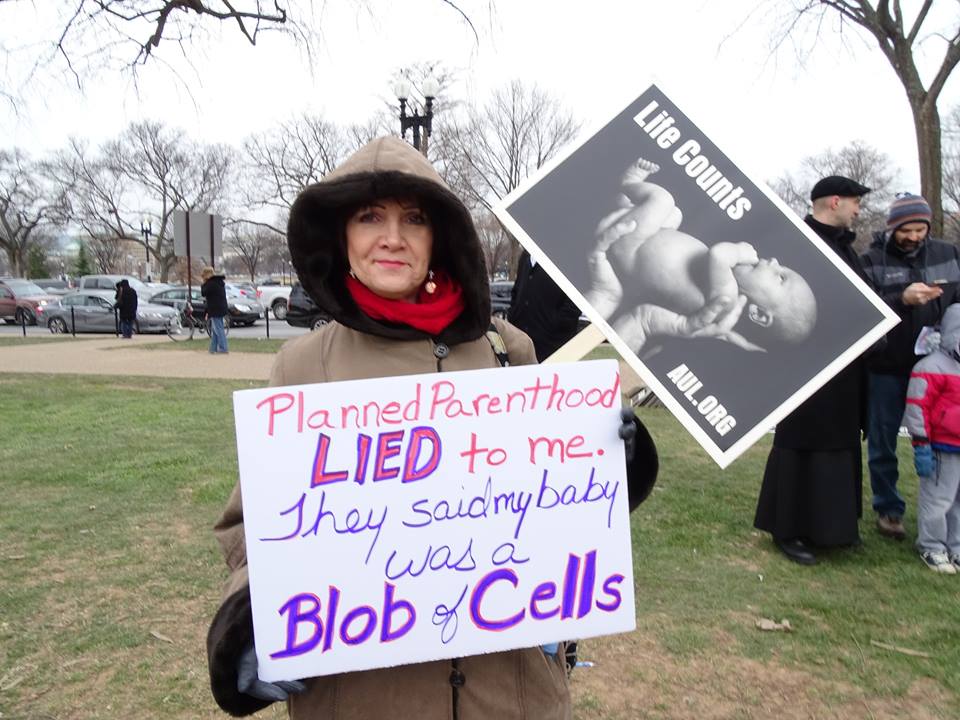 Things were different this year for the annual March for Life in Washington DC. Every year since Roe v Wade was handed down on January 22, 1973, pro-lifers have descended upon Washington DC in growing numbers to pray and stand up against abortion on the anniversary of that historic Supreme Court decision. Even the threat of a major blizzard was not enough to stop this year’s march. The crowd was decidedly smaller than in previous years, some of which have seen estimates of more than a half million to 800 thousand, but the message remained clear – that all life matters and abortion is wrong.

The theme of this year’s march was “Pro-life and pro-woman go hand-in-hand.” Numerous groups and attendees braved the frigid weather and a blizzard to proclaim this truth, a truth that is diametrically opposed to the traditional rhetoric which says that to be against abortion is to be against women, or that to be pro-life is to be a part of the “War on Women.”

Nothing could be further from the truth, according to many participants in the March for Life and the events surrounding the march.

Groups showed up with banners, t-shirts, and buttons proclaiming “Pro-life feminists” and “This is what a pro-life feminist looks like.” One pro-lifer held up a sign which said, “This feminist opposes discrimination by dismemberment.” They challenge the myth that, in order to embrace feminism, one must embrace abortion.

Others came to challenge the paradigm that says that abortion is acceptable in the cases of rape or incest – the “exceptions.” Juda Myers of Choices 4 Life points out that legalized abortion started in the United States in Mississippi in 1966 for the purpose of allowing abortion in the cases of rape or incest. That is the law that opened up the floodgates leading to Roe v Wade, and more than 58 million lives ending in abortion since 1973. She says that if we end “rape exceptions,” legalized abortion will end. This is the message of the upcoming Freedom March #Life Wins on May 6, 2016, in Jackson, Mississippi, which Juda is organizing.

Juda was conceived when her mother was brutally gang-raped by 8 men. Despite people telling her mother to abort Juda, she refused, instead choosing life for her baby and placing her for adoption with a loving family. Juda takes it personally when people say abortion is acceptable in the case of rape or incest, because it says to her that people believe that her life is not worth living. She absolutely loves her life, and is thankful to be here.

Her organization reaches out to the women and children in rape-conception situations, offering emotional as well as tangible support.

Save the 1 had a booth at the March for Life Expo which celebrates and validates the lives of “the exceptions.” Founder and President Rebecca Kiessling was conceived in rape, and recounts that the only reason that she is alive is because abortion, even in cases of rape, was illegal in the time and place where she was born. Her life could very easily have ended before she even took her first breath. Save the 1’s mission is “to educate everyone on why all pre-born children should be protected by law and accepted by society, without exception and without compromise.”

Like Juda and Rebecca, there were dozens of people in Washington DC for the event who love their lives, despite their “exceptional” conceptions, who are grateful that they have the chance to live and love, to have families and to be the voice for those who, like them, may have been slated for death for the crimes of their fathers.

Another participant, Janice Rice, flew in from Alabama for her very first march. She tells the “other side” of the story that few in the media have listened to – she deeply regrets her abortions. She listened to those around her tell her that it would be better to abort the baby that was conceived in rape, and she says that she wished those around her who cared about her would have offered her another choice.

Aborting the baby conceived in rape did not make it easier for her; instead, it added more trauma. She says that people in the abortion clinics told her that her baby was just a blob of cells, and she believed them.

To Janice, abortion was not a choice that empowered her or helped her in any way.

That sentiment was echoed by the women, and a few men, who spoke on the steps of the Supreme Court at the end of the march. They are “Silent No More,” and these beautiful people recounted their heart-wrenching stories of believing the lies of the abortion industry, and how they have lived with years of regret and remorse. The organization Silent No More has partnered with various ministries, such as Rachel’s Vineyard, that help post-abortive women, and other family members impacted by abortion, to find healing and forgiveness.

In attendance at the march was Josiah Presley, a remarkable young man who miraculously survived his mother’s abortion. As other abortion survivors asked Congress earlier this year, if abortion is about choice, where was his?

The people who sacrificed time, money, and comfort to come to the capitol to March for Life have not done so lightly. Many of them bear the scars of “safe, legal abortion” and are speaking out to warn others of the dangers that are minimized or swept under the rug by the abortion industry. Others gave of themselves simply out of a strong desire to be a voice for those who have no voice.

Thousands found themselves snowed in the city, with flights cancelled and roads closed. As of Monday, many were still not home. Busloads of young people were trapped on the Pennsylvania Turnpike for more than 24 hours, as they tried to get out ahead of the storm. But the sacrifices are worth it, according to Facebook posts and news stories. Friendships are being formed and deepened, strategies are being cemented, and lives are being changed.

One marcher prayed with her taxi driver to receive salvation through Jesus Christ. Priests and young people built a snow altar on the side of the freeway and offered prayers and mass, as they shared their food and restrooms on the busses with other stranded travelers.

The March for Life this year has been exceptional, and the exceptions are being highlighted. Tens of thousands of people, young and old, from every race and creed, joined together to speak up for the unborn babies who have no voice, as well as for women who have been lied to and used by the abortion industry – a blood-thirsty industry that is not pro-woman, as it claims, but is willing to exploit women for monetary gain for the parts of their babies.

Presidential hopeful Carla Fiorina spoke to the crowd Friday at the foot of the Washington Monument, challenging the “War on Women” rhetoric. Townhall records her words:

…The establishment media and political class don’t want us to talk about what the abortion industry is doing. You saw what happened when I talked about the horrific truth of the planned parenthood videos during a Republican debate. Unlike the media, you’ve watched the videos. You’ve seen an aborted baby, its legs kicking, its heart beating while the technician describes how they would keep these babies alive to harvest their organs. The left called me a liar. They said there were no such videos. There are no aborted babies born alive. Nobody is selling baby parts.

But look what happened next. Planned Parenthood came out and said they would no longer take compensation for baby organs. Sounds like an admission to me!

Hillary Clinton is giving a pro-abortion speech today in New Hampshire. She is saying that we as conservative women don’t count. But here’s the truth: they have perverted feminism into a left-leaning political ideology where women are pitted against men and used as a political weapon to win elections.

Being empowered means having a voice. But ideological feminism shuts down conversation – on college campuses and in the media. If you are a pro-life man or a conservative woman who doesn’t believe the litanies of the left, then you are “waging a war on women” or you are a “threat to women’s health” or you are variously described as “window dressing” – Joni Ernst – or offensive as a candidate – Carly Fiorina.

Hillary's Cough: The OTHER Hacking Scandal