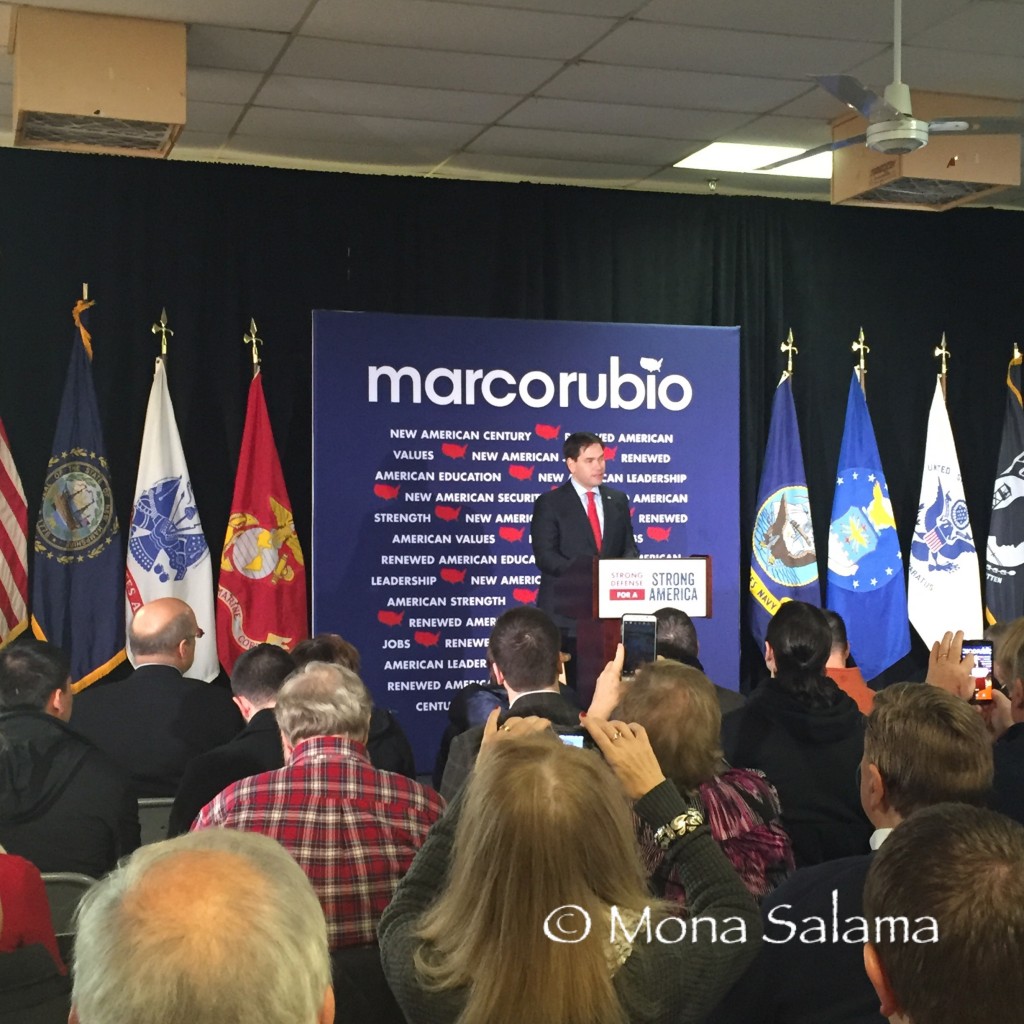 With five weeks left to go until the New Hampshire primary, Florida Senator Marco Rubio picked up right where he left off: Attacking his rivals on the issue of national security. During his two-day swing in New Hampshire, Rubio delivered a speech on national security on Monday morning while blasting his rivals from his own party of whom he said are “more passionate about weakening our military and intelligence capabilities than about destroying our enemies.”

Before Rubio began his remarks, Hooksett City Councilor Marc Miville, who would introduce him to the audience, officially announced his endorsement of the Florida Senator. According to Real Clear Politics, New Hampshire average has Rubio in second place with 13.3 percent, behind Donald Trump, but has a narrow lead ahead of New Jersey Governor Chris Christie and Senator Ted Cruz.

After the event, Miville told PolitiChicks his reasons for endorsing Rubio over his opponents. “I visited seven candidates, one of them being Rubio, who made campaign stops here in Hooksett and he was the only one who was positive while he spoke about the issue of national security,” Mirville said. “The other candidates came across as angry and complained about the issue.” He also added that he feels Rubio has “substances to solve the issues rather than complaining about the ongoing problems.”

Using his speech to condemn President Obama’s handling of foreign policy, Rubio said he is the only candidate in the still crowded field to “lay out a detailed plan to roll back the president’s foreign policy failures.” He slammed Democrat frontrunner Hillary Clinton for her record as Secretary of State, adding if elected she would continue to weaken America. “We cannot afford to elect Hillary Clinton, because America cannot afford another four years like the last eight,” Rubio said.

The attacks on Hillary were light compared to the snappy criticism Rubio had for his Republican opponents. Without mentioning any candidate by name, Rubio would take shots at both Senator Ted Cruz and Rand Paul, as well as Donald Trump.

In his direct attack at Cruz, Rubio mocked the Texas Senator’s past comments about bombing ISIS “to the point that it would make the sands glow in the dark.” “My question to this claim is with what?” Rubio said, adding criticism towards Cruz for voting against the defense spending legislation. “Because they certainly can’t do it with the oldest and smallest Air Force in the history of this country, or with the smallest Army we’ve had since World War II, yet these are what we will have thanks to the cuts these candidates have supported.”

“So Rubio’s foreign policy and national security strategy is to invade Middle Eastern countries, create power vacuums for terrorist organizations, allow their people to come to America unvetted, give them legal status and citizenship, then impose a massive surveillance state to monitor the problem,” Stewart said.

Even though most of the attacks were directed towards Cruz, Rubio would direct parts of his attacks towards Rand Paul, especially on the issue of the surveillance programs. “If ISIS had lobbyists in Washington, they would have spent millions to support the anti-Intelligences law that was just passed with the help of some Republicans now running for president,” Rubio said. 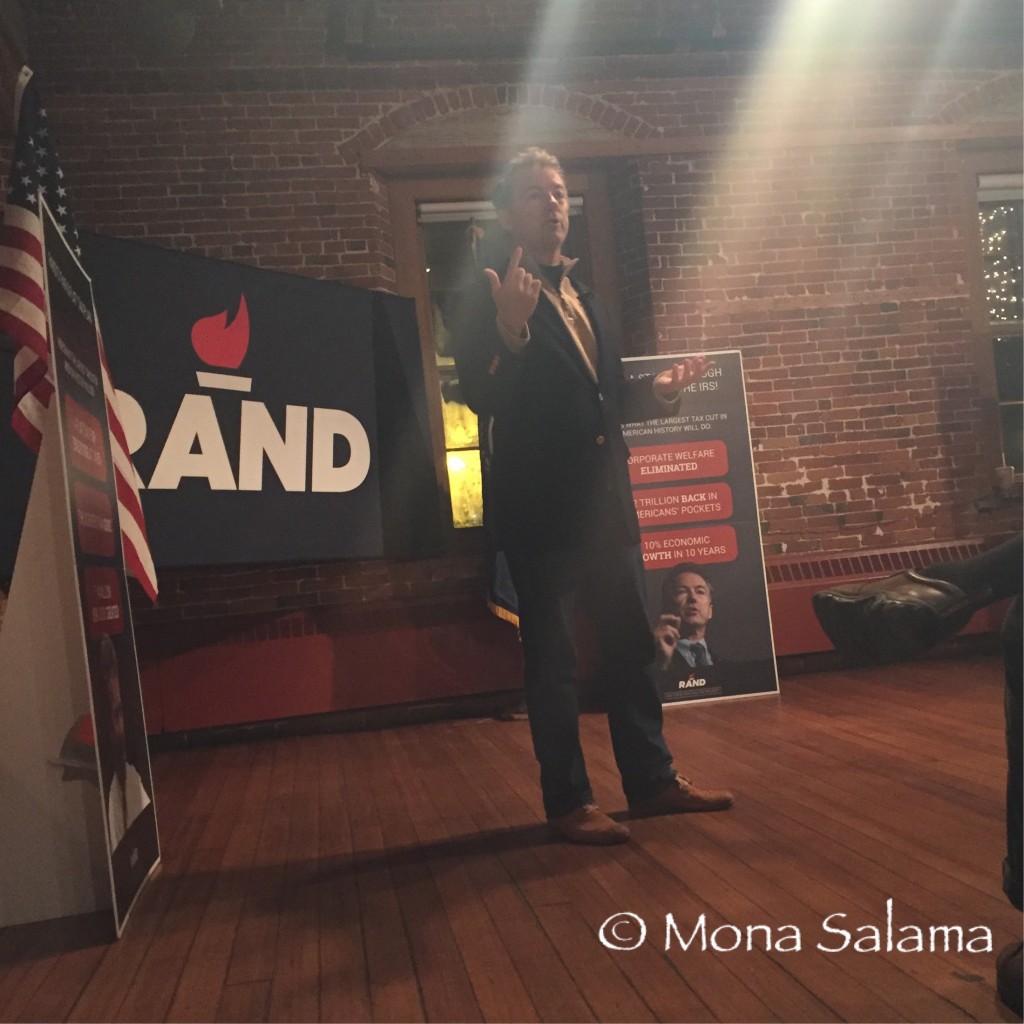 Sen. Paul, who was also was in New Hampshire for several of his own campaign town halls, gave PolitiChicks his response on Rubio’s remarks. “Rubio said ISIS would be in favor of ending our bulk collection of phone records, the NSA reform,” Paul fired back. “I think [Rubio] is way off base, I think that if ISIS was for any legislation, it would be for his legislation, the ‘Gang of Eight’ bill, that would let anybody come across the border anytime. But I do think he is actually weak on national security because he is weak on border security.”

On the issue of ousting Syrian President Bashar al-Assad, both Cruz and Paul oppose his removal, while Rubio supports deposing the regime leader. The rift amongst the Senators views of what America should do in regards to Assad has reignited an ongoing feud over foreign policy since the CNN GOP debate in middle December. “With the issue of toppling Assad allows ISIS the space to grow,” Rand told PolitiChicks. “I think [Rubio] needs to understand that regime change won’t make the Middle East safer. And if Assad is overthrown, ISIS will fill that vacuum.”

Rubio would also knock on Trump, criticizing how the frontrunner avoids giving specific plans on issues of national security only to just talk tough. “The job is not described in the Constitution as ‘Entertainer in Chief” or ‘Commentator in Chief’, or even, frankly, ‘Economist in Chief'”, Rubio said. “If you can’t be bothered to offer specifics on how you will perform that job, then you don’t deserve that job.”

After the speech, Rubio told supporters he is the only candidate in the crowded GOP field to have “a record of leadership and judgment,” adding that New Hampshire plays an enormous role and should not settle for just any Republican as the nominee. “Eight years ago today, our nation and our world took a turn for the worse,” he said. “When you vote for me, you know exactly what you’ll get. You’ll get a president who will destroy terrorists overseas…You’ll get a reversal of the defense cuts that Obama and Harry Reid have forced on our military. Anyone who supports Obama’s disastrous defense cuts cannot make that promise.”

"Welcome to the DEMOCRATIC United States!"