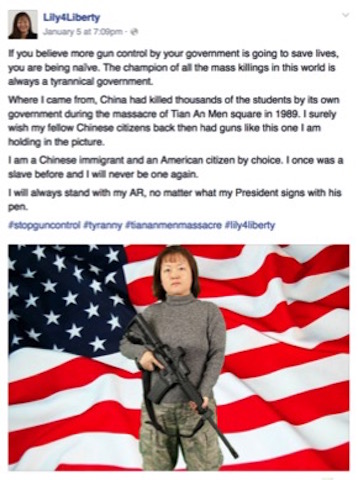 As the Colorado GOP sifts through its ever growing candidate list to run against incumbent Michael Bennett (D), the woman who garnered national attention with a recent pro-gun Facebook post denouncing Obama’s executives actions on gun control announced her candidacy as a Libertarian candidate. Lily Tang Williams resigned her position as state chair of the Libertarian Party of Colorado to run for the U.S. Senate.

Williams brings to the table something many other Libertarian candidates do not—name recognition and potential supporters that stretch across party lines.

Because of Williams’ education activism, she surrounds herself with an array of allies that include Democrat, Republican, and unaffiliated grassroots activists. The questions are how many would cross party lines to vote for her—and how would that impact the election.

If Williams receives the nomination at the Libertarian state convention in April, she would be running as the longshot candidate and the potential third party spoiler. No Libertarian has ever been elected to the United States Senate.

The general voter makeup in Colorado is roughly 1/3 Democrat, 1/3 Republican, and 1/3 third party and unaffiliated voters. The Secretary of State’s Web site showed the following total registrations of active voters by party as of January 1st of this year:

Williams, also known by her moniker Lily4Liberty, has been the subject of media attention due to her viral Facebook Posts. One of the posts contained a video comparing the Common Core to the education system in which she grew up in China which she refers to as the “Communist Core.” The other is a photograph of her posing in front of an American flag with a firearm. She wrote, “If you believe more gun control by your government is going to save lives, you are being naïve. The champion of all the mass killings in this world is always a tyrannical government.”

Williams ran for the Colorado legislature in 2014 for state representative of House District 44 located in the Republican stronghold of Douglas County—a seat currently held by Kim Ransom.

Williams told Politichicks, “Lily4Liberty is not for sale. Trust me to fight for freedom, because I have been fighting for freedom all my life”.

Can You Handle the Truth?